If you like to refer to your dog as a “Staffy,” you might be confused about what breed of dog he is.

While these two breeds are very similar, there are some differences between them that make it important for prospective owners to know what kind of animal they’re getting when they adopt one.

What Is an English Staffy?

The breed was developed in England during the 19th century. It was originally bred to be a hunting dog and catch rats, so it has strong jaws and teeth that make it ideal for this type of work.

It is also very loyal to its owner and will protect them if they need protection.

The English Staffordshire Bull Terrier gets its name from its original purpose and place of origin (England).

The term “bull” refers to the fact that these dogs were often used in bull-baiting events where they would attack bulls until they died or seriously injured themselves.

What Is an American Staffy?

The American Staffordshire terrier is a dog breed known for its strength, agility, and loyalty.

The American Staffordshire terrier originated in the United States in the late 1800s.

It was bred to be a fighting dog, but when legislation banned dog fighting, it became popular as a family pet and show dog.

Many people who have owned American Staffordshire terriers love their dogs’ affectionate natures and willingness to protect their owners.

Why Do Australian Shepherds Have Docked Tails?

What are the Differences Between the American staffy and the English staffy? 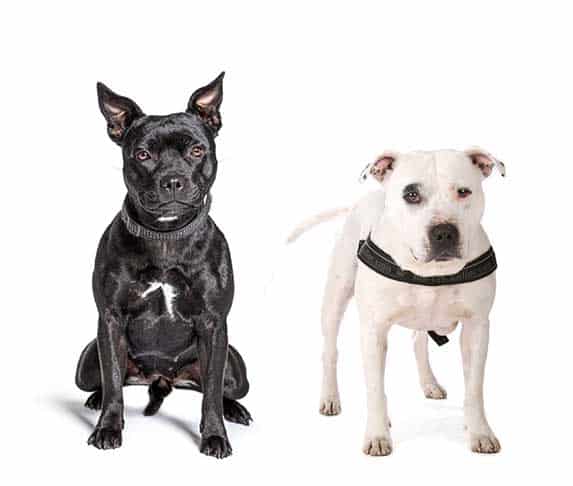 The American Staffordshire Terrier is a larger version of the English Staffordshire Bull Terrier and is bred to be more muscular and stocky than its counterpart.

While both dogs are known for their loyalty, intelligence, and protective instincts, there are several differences between the two breeds.

Here’s what you should know about this dog breed in general before deciding if it’s right for your family:

They have different temperaments

Because of their size differences, the American Staffy can grow up to 50 pounds while the English Staffy maxes out at 30 pounds, these two breeds have different temperaments as well.

The American Staffy tends to be more aggressive or protective than its smaller cousin; therefore, it may not be suitable for first-time owners or families with small children.

On the other hand, because of their smaller size, English staffies make better pets for people who don’t want a guard dog but still want a confident pup who won’t back down from any potential threats!

In addition to having different personalities when it comes time for training, these two breeds also require different approaches when teaching them new tricks!

Similarity Between the American staff and the English Staffy?

The American staff and the English staffy are very similar.

They both have short, smooth coats that can be any color or combination of colors.

Both breeds are energetic and intelligent dogs with a strong prey drive.

They are both highly active dogs that need plenty of exercise to stay healthy and happy.

You may want to consider getting an American Staffy or English Staffy.

There are many differences between the two breeds, but they share a lot in common as well.

Both have been around for hundreds of years and have been used for hunting and guarding purposes.

These dogs can be very loyal companions if properly trained by their owners.