As pet owners, we tend to want to understand our dog’s behaviors and actions so that we can better help them for any reason.

If our dog suddenly picks up a new habit or starts acting out of the ordinary, it’s common to wonder if what they’re doing is normal or not.

Despite the many differences found between dog breeds, there are still more similarities than you’d imagine.

If there’s one behavior found in a variety of dogs, it’s carrying something in their mouth, whether it be a stick, a toy, or maybe even another animal they hunted. Surprisingly enough, this can be easily explained by looking no further than their genes.

How Genes Play a Role?

Modern dogs today can trace their ancestry back to ancient wolves (otherwise referred to as Canis Lupis).

Who much like their modern counterparts, had to hunt and kill to get steady food.

Rather than eating out in the open where other predators could attack, these wolves might have had to transport their prey back to their dens.

The best way to do so is the mouths.

These behaviors which could determine life and death found themselves continuously taught to younger wolves and imprinted the species as a whole.

This isn’t all that different from what people refer to as “maternal instincts” when a new mother has her first child and already knows how to take care of it.

Traits that help a species survive can be passed down through DNA to help future generations as well.

While a dog presenting an owner with a toy isn’t exactly life or death, this still explains why it may be a dog’s natural instinct to carry around whatever important to them in their mouths.

This can also be linked to the dog’s specific breed as well.

Breeds more akin to hunting like Beagles, Golden Retrievers, or Foxhounds have also been continuously taught to pick up the kills of their owners and bring them back.

This is why you may not find Pugs or Chihuahuas running up to you with presents in their mouths.

Is This Behavior Safe? 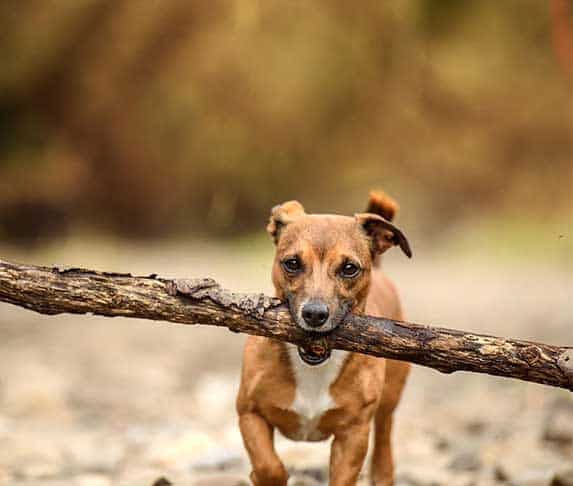 We all want what’s best for our pets and sometimes their natural instincts aren’t the best fit for a modern setting and can end up getting people, or even themselves hurt.

Fetching items with their mouths, however, can be regarded as harmless most of the time.

With their advanced noses, most dogs can sniff out what might be too dangerous to carry around.

So you shouldn’t have to worry about them carrying around sharp objects.

Every dog owner should still make keep an eye out for any of these items their pet might try to pick up:

1. Food Wrappers — Humans aren’t able to digest everything a dog can and vice versa.

A dog picking up an old candy wrapper or bag that still has traces of the food on it could lead to it getting sick or even choking on the plastic.

2. Dead Animals — As stated before, some dog breeds have this bred into them, running out and fetching fresh kill.

While this may be ideal for some owners out in fields, this isn’t exactly what a lot of suburban dog owners are looking for.

Some dead animals may also carry diseases that can seriously harm the dog as well.

3. Toys — This one isn’t for all dogs of course, but it all depends on training and what’s best for your particular dog.

As we’ll get into later, unhealthy habits can form from dogs carrying their toys in their mouths.

So it may be best to train your pet otherwise.

How Should an Owner Respond to This?

Every dog is different and requires different things from its owners.

But generally, it is OK to let your dog explore the world and carry items in their mouths, in some cases they might even need it.

Anxiety can be common in dogs who’ve come from multiple or abusive households.

Much like a human child might latch onto a doll or a blanket, a dog may do so with a toy.

So letting them use a toy as an emotional crutch for a period of time could be beneficial to your pet.

Some dogs might carry around items in their mouths specifically to present to their owners or other people.

Which is a habit that can be much more preferable to other greetings.

With larger dogs who can knock down grown adults accidentally, it’s best to teach a pet a gentler way to greet family or guests by presenting a toy as a gift.

This can also be a way for a pet to initiate play or exercise with an owner as well.

Rather than throwing a temper tantrum or a fit, it can be best to encourage a pet to ask politely by presenting their favorite toy to their owner.

This can, however, get out of hand if not responded to correctly.

Why Do Dogs Bob Their Heads Before Eating?

What to Still Watch Out For? 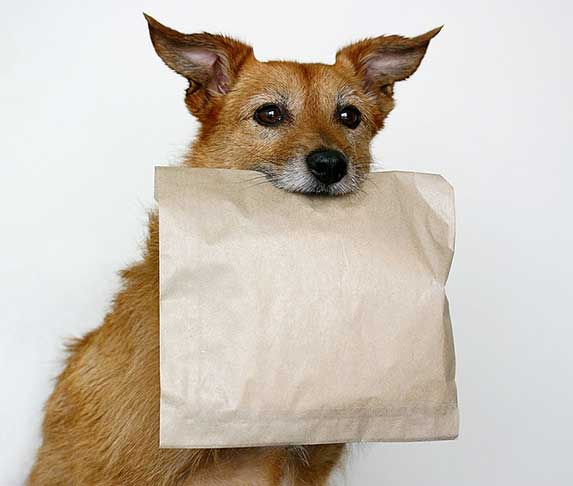 A dog will pick up on past interactions and use those to form new habits, the very idea behind training.

Yet this means they might also pick up on bad habits as well.

When it comes to initiating play, if a dog consistently presents toys or objects to an owner and expecting a reward, perhaps then it’s time to start weaning off that and implement a schedule that can be followed.

Another issue that can arise is a dog picking up an owner’s personal items that may not be harmful to the dog itself, but may still result in a damaged item.

This may also mean it’s time to train a dog in other methods of indicating what it wants or needs through other methods than just picking up and moving around an item.

Again, every dog is different, and it’s important to understand yours to the best of your ability before making any major decision in its training.

A dog picking up items with its mouth is a completely normal and usually healthy habit for it to form and carry out.

But as with anything else in owning a pet, an owner must make sure that a healthy habit such as this doesn’t get carried away and end up hurting our beloved friends.