Bearded dragons are one of the most popular pet lizards in the world.

There’s a reason why so many people have them as pets: they’re easy to care for and can live for up to 15 years.

But some bearded dragons, like all other reptiles, sleep more than their fair share or even more than that!

So what’s going on with your bearded dragon when he’s sleeping so much?

10 Reasons Why My Bearded Dragon Sleeps So Much

There are many possible reasons why bearded dragons may not sleep.

1. They’re Anxious About Their New Home

Now that you have your bearded dragon, it’s time to get comfortable with the fact that they are naturally shy and nervous reptiles.

They need time to adjust to their new environment, and making them feel safe will help them settle in more quickly.

Bearded dragons are known for being slow-moving creatures, but don’t be fooled by their relaxed demeanor!

They’re actually quite alert and active animals who require frequent attention from their owners.

If you see your bearded dragon’s eyes moving around while he or she is sleeping, this means they aren’t truly asleep—they’re just conserving energy by using one eye at a time in order to keep scanning for potential predators or threats nearby!

2. It’s Possible Your Beardie is Ill

If your pet begins acting sluggish without showing other signs of illness such as a lack of appetite, it’s best to take him/her to the vet for an examination as soon as possible.

Illness can cause lethargy and make your lizard slow or inactive.

Bearded dragons also can get sick from stress or too much heat or cold; they are very sensitive animals so it is important not to over-handle them or expose them to extreme temperatures.

3. Something is Stressing Them Out

Your bearded dragon may be stressed if it is in a new environment.

They can get nervous, and this makes them feel threatened by their surroundings.

If you are moving your beardie to a different cage, make sure you give it time to get used to the move before you start training it on new tricks like standing on hind legs or climbing up walls.

4. Your Lizard is Preparing to Brumate

Brumation is a period of inactivity for bearded dragons.

While it doesn’t occur as frequently as hibernation, brumation is still normal behavior for your lizard.

They will brumate in order to conserve energy during the winter months when temperatures are low and food is scarce.

Brumation can last anywhere from 3 weeks to 3 months depending on where you live and how cold it gets outside.

The first few weeks of brumation will be very short, but they’ll start increasing their sleeping time after that point until their body temperature drops down to about 70 degrees Fahrenheit.

If you’re worried about your beardie’s health during this period, there are steps you can take to ensure she stays healthy while she sleeps!

Babies and eggs need to be kept in a dark environment until they are old enough to move around on their own, so an adult bearded dragon needs a dark place to sleep at night.

But babies also need to digest their food in a dark environment, as it gives them the best chance of absorbing all of the nutrients from their meals.

In fact, babies must stay in complete darkness for at least 24 hours after eating until they are able to digest protein-rich foods without getting sick or having diarrhea (source).

Can You Bury a Dog In Your Backyard?

If your bearded dragon feels too cool, it will want to sleep a lot.

To test if your lizard’s cage is too cool, touch the glass with your hand and see if your hand feels warm or cold.

If it feels warm or room temperature then take action! Reptiles spend most of their time in the wild basking under the sun so they have adapted over time to only need heat when they are sleeping or at night time in their burrows.

If you find that your bearded dragon is sleeping too much because of being too cold, try adjusting the temperature inside its cage by raising it slightly higher than normal room temperature (around 20°C).

You also want to make sure that there are no hot spots where they can get burned on any lamps/heat rocks/etc., so avoid these areas altogether!

7. They Haven’t Had Enough To Eat

One of the most common reasons why your bearded dragon might be sleeping a lot is that they haven’t had enough to eat.

Bearded dragons need both protein and calcium in order to grow, develop and stay healthy.

They also need a variety of food items because their bodies can only absorb so much at one time.

If you feed them too much or too little, it could cause problems with their digestion process which in turn affects how much energy they have during the day.

If you don’t want your lizard waking up while you’re sleeping then it’s best to make sure they get fed first thing every morning before bedtime!

8. Their Diet Variety is Off

Your bearded dragon’s lethargy may be caused by a lack of proper nutrition.

If this is the case, it’s important to look at your pet’s diet variety and make sure they are eating enough and eating the right things at the right times.

9. Their Sleep Cycle is Off

One of the reasons why bearded dragons sleep so much is that they are affected by seasonal changes.

During spring and summer, they will sleep during the day. In winter, they will wake up at night to bask in their enclosure’s warmth.

Bearded dragons also need a warm cave where they can stay during the day or night to regulate their body temperature.

If you keep your bearded dragon’s enclosure too cold, it won’t get enough rest and may become ill if it continues to have this problem for an extended period of time.

The first thing to keep in mind is that your bearded dragon is still a baby.

Bearded dragons are not fully mature until they have reached at least 12 months old, and they can continue to grow until they are around 15 years old.

As such, it’s not unusual for them to take a little while before they start behaving like adults.

They may sleep most of the day or even skip meals because their bodies aren’t ready for the work required by adulthood yet!

Do Bearded Dragons Brumate in the Summer? 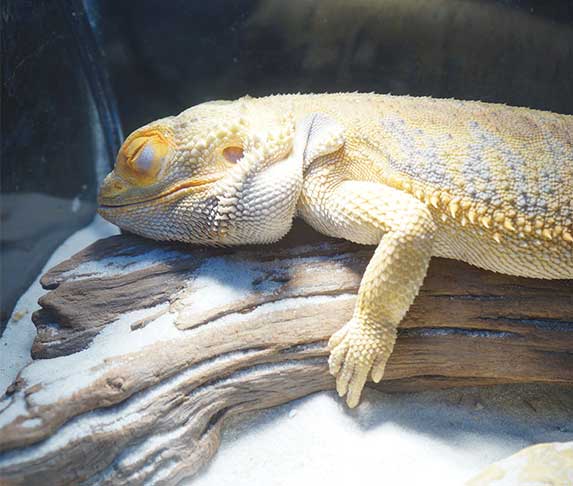 While some bearded dragons brumate in the winter, they do not brumate during the summer.

Bearded dragons are most active during this season and will bask in their natural environment more often.

This helps them regulate their body temperature and keep cool.

During the summer months, your bearded dragon needs to get out of his enclosure for at least an hour per day so he can stretch his legs and take a look around.

If you notice that he isn’t getting out much anymore, it’s time for him to move into a larger enclosure with more room to roam around.

Bearded dragons are fascinating creatures, and they have a lot to teach us about how we can better care for our planet.

We hope that by reading this article, you’ve learned new things about bearded dragons—and most importantly, how to help them!