Rabbits are known for their long ears, cute little teeth, and cuddly furs.

But like any other animal out there, they are not free from weird quirks.

This article will discuss a behavior typical among rabbits that a pet owner will undoubtedly be familiar with – licking their feet.

If you own a rabbit, then you might have noticed them do this peculiar activity.

But have you ever wondered, “why do rabbits lick their feet after scratching?”

Well, it could be that they are wiping their paws, to remove dirt, or something else entirely. Let’s figure out the answer! 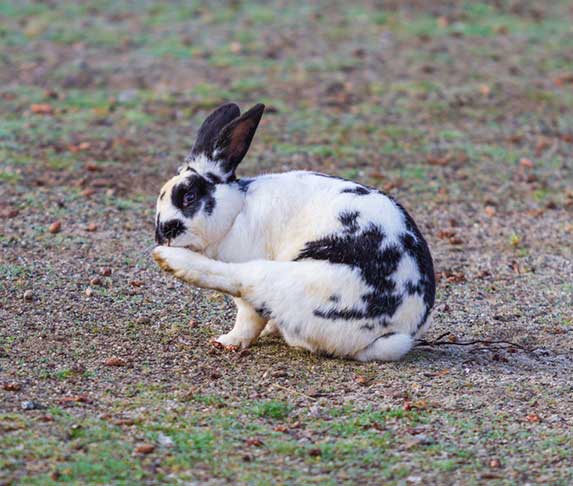 Several reasons might explain this behavior observed in rabbits.

However, most answers usually revolve around one singular concept – hygiene.

Although there are other reasons, we shall uncover every one of them in the listing below.

Here are the four reasons behind the behavior:

1. It’s their version of wiping their hands clean

Rabbits are very much alike to cats. Cats are exceptionally hygienic, and so are rabbits.

There is no need to wash rabbits as frequently because they groom themselves well.

2. Licking their hands is one way of doing it

If your rabbit has another buddy of the same species in the cage, then you’ll see them licking each other.

It’s their way of bonding and grooming.

When rabbits scratch their body (or you), it is only natural for them to wash their hands after, in line with their hygienic character.

It wouldn’t be surprising if you let your rabbit go for a bit of stroll in the backyard now and then.

That would be very helpful for it! But you might notice the paw licking extravaganza go a little more frequent after spending the day out.

The reason is simple: it might have some trapped sediments in its digits.

The same can be said after they scratch.

The dirt might be along its body, and scratching causes the dust to sediment in its paws.

Licking it in response is just a common way of removing the trapped substances.

4. Their cleaning the itchy part

Sometimes, we presume that rabbits lick their paws to clean the paws themselves.

We hate to break the bubble for you, but that is not always the case.

Rabbits use their paws to clean their bodies, especially when no other bunny buddies could do that for them.

Let us give you an example:

You notice your rabbit scratching his ear and then licking its paw after.

One way to explain is that the rabbit is simply cleaning its paw.

Another more underrated way is that the rabbit is using its paw to clean its ears.

And the rabbit is simply giving its paws a little wipe to remove the collected dirt and prepare the paw for another ear cleaning session.

In this case, they use the paw to clean their body, much like how you rinse your hands after washing your face with soap.

5. It’s an unheard cry for help

One of the less hygiene-mediated reasons, more health concerns is pododermatitis.

It is a bacteria-borne infection that may affect either the fore or hind feet of rabbits.

And they might not be licking the foot but scratching it instead.

Pododermatitis is a pressure sore.

It happens when its paws have too much pressure on when in contact with the ground.

The damage in the blood supply of the paws escalates, leading to inflammation and worse infection.

Once a skin break occurs, the bacteria can grow in the wound, affecting even the bones and tendons underneath. Here are some common symptoms of pododermatitis:

Although the licking of paws is not a common sign, there is logic in presuming that it might be a principal cause.

Pododermatitis is described as an itchy sensation.

That said, if rabbits use the itchy paw and scratch an area of their body, the pododermatitis might be triggered.

It may lead to a stress response in the form of paw licking.

What to do if rabbits are seen licking their paws? 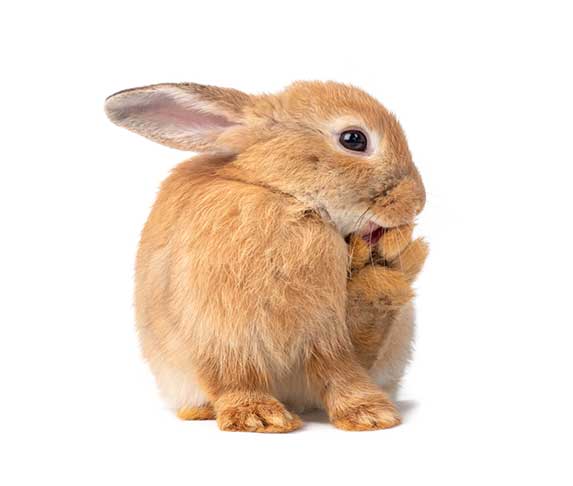 That means seeing this behavior in them is not unusual and nothing alarming.

But to be safe, here are some pointers we can give you just for your peace of mind.

1. After rabbits eat their meals or plays outside, make sure to wipe their bodies clean.

You may use your hand for this activity.

The point is only to remove any adhering food, carrot, leaves, or sediments that may reason rabbits to lick their paws once they scratch.

Plus, who would want a dirty rabbit roaming around the living room!

2. If you notice them licking their foot excessively, coupled with the symptoms of pododermatitis listed above, check their foot for any infection.

Pododermatitis is usually revealed as an inflamed spot, usually in their hind paws, but the front ones can be affected too.

Pododermatitis: What you need to know

Since pododermatitis is the risk factor here, we will provide some important points you should remember to avoid.

Here are common causes of pododermatitis:

Try to avoid scenarios that may result in the above causes happening to rabbits.

If you observe symptoms, bring the rabbit to a vet for a proper consultation and medication.

Rabbits are amazing quirky creatures, and it might seem weird to us.

There are reasons behind their paw licking behavior.

While some might be lighter than others, it pays to be cautious.

Rabbits deserve to feel no pain of any sort in their bodies.

However, that’s not how nature works.

What we can do to help is care for them and provide the best possible help if the paw licking behavior goes south.