You might have already seen a video of a goat headbutting a human, a tree, or even another goat.

Or perhaps you have seen this yourself in person.

While this may come off as strange or even aggressive behavior to us, there are various reasons why goats do this.

Some of the reasons goats headbutt each other are because they feel threatened, are playful, or are stressed.

Today’s article will share the common reasons why goats headbutt other animals, trees, and even people.

We will also share some appropriate actions you should take whenever this happens.

RELATED: Why Does My Cat Headbutt Me?

Why Do Goats Headbutt Each Other? 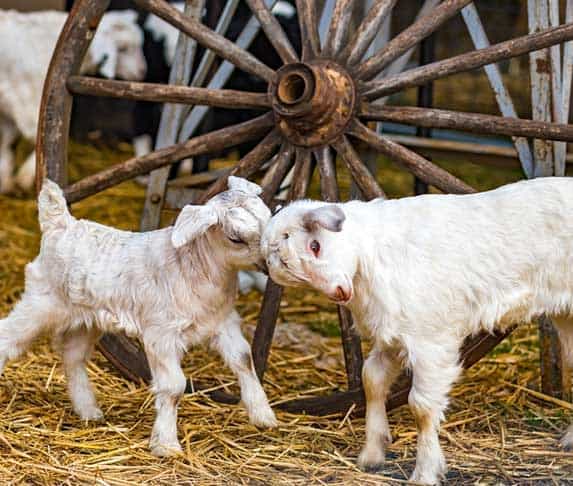 You may observe your goas headbutt things around them.

Although this is a natural behavior from these animals, these behaviors do not occur randomly.

There are underlying reasons behind it, and here are some you can look into:

Goats sometimes headbutt each other whenever they play with other goats and discharge some of their stored energy.

Their horns and skulls are strong enough to withstand the pressure from a head butt.

So if you see two goats that look like they are having fun, don’t worry – they will not injure themselves while playing around.

This activity is somewhat healthy for them.

We all know that goats have healthy diets, and because of this, their bodies build up lots of energy.

It must release this energy to improve both its physical and mental aspects.

Therefore, headbutting each other playfully is not harmful to goats, and you should not stop them whenever they are doing so.

While this is a common practice for goats, this is far more dangerous than playful headbutting and may even cause injury to those who are fighting.

They both will not stop unless the other quit the challenge as they showcase a high level of aggression.

Fights like this usually occur in the wild, wherein the male goats fight the other males during mating season.

This behavior is quite normal for goats in the wild, so you must intervene and keep them in separate enclosures if you notice your pets doing this.

Why Do Goats Headbutt Humans?

Just like goats headbutting other goats, there are various reasons why goats head butt humans.

Here are some of them:

If a goat is unfamiliar with you, they may try to mitigate a fight and headbutt you.

Unlike wild animals, humans don’t pose much of a threat to goats, so instead of running away, they will start to engage in a headbutting contest with you. It can also happen when goats are provoked.

For instance, if a kid is bothering a goat, the goats may feel irritated and start to headbutt them.

It is hazardous, especially for little children, so neither you nor your kids must engage in an activity that will provoke the goats.

Another reason a goat may try to headbutt you is because they are trying to play with you.

Of course, goats do not know that our skull is not as rigid as theirs, so they may headbutt us because they are playing with us or asking for attention or food.

While this may seem harmless, especially when a goat is still young, this behavior must not be encouraged as they will be able to take it with them as they grow up.

Avoid pressing on the forehead of your goat or doing any activity that may be portrayed as a challenge.

When dealing with goats, it is better to be seen as a provider than a rival.

Why Do Goats Headbutt Other Animals?

One of the main reasons goats headbutt other animals is that it has become a force of habit.

Many species of animals possess this psychological habit of headbutting each other, including cows and bulls.

There are various reasons why they do this, and as previously mentioned, this may be due to fear, aggression, playful fighting, or simply because it forms part of their survival instincts.

If a goat is playfully headbutting other animals, it is best to check if the force of these headbutts is tolerable or if it may be damaging to either one of the animals.

Since goats can be somewhat territorial, it would be best to keep a close eye on them whenever other animals, like dogs are around.

Why Do Goats Headbutt Trees? 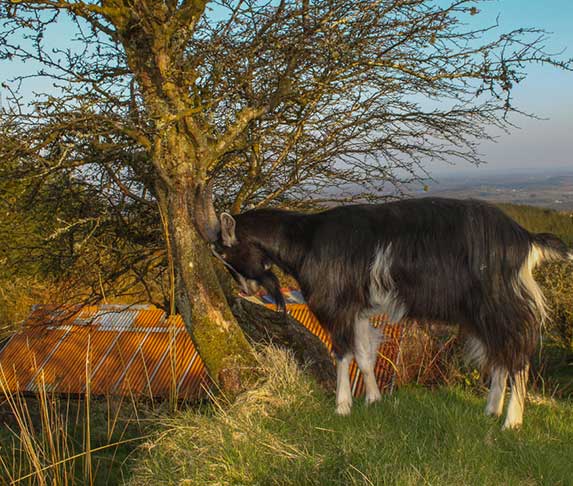 Goats headbutt trees because they are feeling lonely.

Goats need to release their pent-up energy, and they usually do this by play fighting with other goats.

However, if your goat is alone, then that means they have no one else to play with, and the only way they can release the energy they have stored in their body is by headbutting a tree.

It is a very uncommon behavior, and you must be very careful in what kind of social environment you are setting your goat up.

Make sure that your goat is comfortable and does not feel secluded at any time.

Otherwise, it may get into this destructive behavior, which may get hurt in the process.

Goats may come off as aggressive creatures for people who do not know much about them, mainly due to headbutting behavior.

However, there are reasons why goats act in a certain way, and in this case, there is a good enough reason why they headbutt humans, other animals, and even trees.

Remember that goats are different from other pets, and they should not be kept in a secluded environment.

It would also be best to have at least a minimum of 2 goats instead of owning just one since goats are playful by nature and keeping them alone or secluded will not result in anything good.

Also, remember to keep them in a natural and green environment to ensure that they can engage in healthy physical and psychological habits while ensuring that they are getting enough supply of their greens.