It is important to always know what and what not to use.

After all, all we want is for our dogs to be happy.

Just as food, as you eat you may want to feed some to your canine, but some human food is poisonous to their health.

Same to training, some training techniques can be dangerous to your dog. You have to be careful.

Dog whistles are not necessarily harmful but if used in the wrong way they would cause more harm than good to your pooch.

The fact that you cannot hear these whistles means that your canine has a very sensitive sense of hearing. When you make these sounds haphazardly, you could easily cause him harm.

A dog whistle, also known as a silent or Galton’s whistle, after Francis Galton the inventor, is a high-pitched whistle that is used when training dogs.

It emits sounds that come from an ultrasonic range.

It is so high-pitched that it cannot be heard by humans.

Other animals such as cats can also hear these whistles.

Have you considered that they may be harmful to your dog in a way?

We are here to answer your question.

With their powerful hearing senses, dog whistles that cannot be heard by people may cause harm to their ears if abused.

If a loud noise is blaring right next to your ear, you will hurt yourself.

Similarly, when you blow the whistle directly into their ears and with force, it will hurt them. 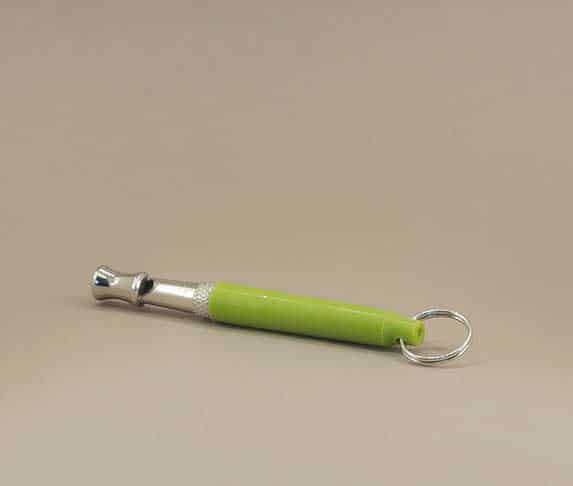 Whistles are made from either metal or plastic.

They can be worn on the neck using a lanyard, tucked into your pocket, or used via an app on your smartphone.

A good whistle should have a range of sound pitches that can be adjusted to suit your dog.

These are the whistles that are silent to humans.

You can adjust their frequencies to suit your dog’s hearing ability.

2. Whistles with a pea

These are whistles with a tiny ball inside them or a pea that allow you to make different sounds and trills.

They help you use different sounds for different commands.

These types of whistles are mostly used in places with a colder climate, this is because the peas freeze when mixed with saliva.

But, they produce fewer sound variations compared to the pea whistles.

These are whistles that produce different sound variations.

The whistle has two separate tones which you can use for different commands.

If you choose to use only one type of tone, test it on your dog to see which one he responds better with.

You could use the “wake up” method.

When your pooch is asleep, test each sound and the one that will wake him up is the right one.

Why Are Dogs Banned in Iceland? (9 Reasons)

How To Use A Dog Whistle Safely?

Dog whistles help during training. They are used to instruct the dog on what and what not to do.

The different sounds can be commands to different commands.

With continuous use of the whistle, your dog will know the command and the expected command.

It is recommended that a whistle should be used as secondary or supplementary training equipment.

When using a whistle, wait for your dog to be calm.

Blow the whistle with the sound variations that indicate the command you want your dog to follow and when they do what is expected of them, reward well with treats and sweets.

Do it sparingly, you aim to let the dog succeed.

It is more of teaching and not a challenge.

Two Reasons Why Dog Whistles Are Used For Training

Using the same sound constantly will eventually have your dog get used to a consistent, emotionless sound.

Just like when training the dog using the word of mouth, when different voices tell him the same command he will get confused.

This is the same as what happened when using different sounds to initiate the same command.

Silenced whistles are advantageous since they do not hurt your ears and can be used during in-house training and won’t cause disturbance to your human neighbors.

2. Calling your dog from far

With their very high-pitched noises, they can be heard from very far.

This is important when you need to call out for him when he went very far and you cannot see them, or when you lose sight of them in public.

Dogs that have a hearing problem benefit from these whistles especially if you find a frequency that applies to them.

Ways To Use Dog Whistles Safely

If you follow these ways when using a whistle while training your dog, you will cause no harm at all to them.

If using a whistle for the first time, blow gently and only if necessary blow a little harder. Build up the whistle noise instead of starting high then reducing.

You might blow a little harder thinking your pooch cannot hear but he can. below is how to use dog whistles:

Not Every Dog Will Respond To Whistles

There is no proven reason as to why some dogs will react to whistle blows and others don’t, but some dog owners will blow their whistles and get no response.

If you try all methods and frequencies and your dog does not respond then most probably is not as keen and you won’t be able to use the whistle during training.

Using a whistle during training is effective and makes it a fun process.

However, if you do not use it the right way it could easily harm your canine more than you know.

Only use it as a supplementary.

If your dog is used to you using a whistle, do not leave the house without one.