Milk is the fan-favorite drink when dogs are portrayed and represented in popular culture.

Milk is healthy, delicious, and dogs have been drinking milk since birth. But how about milk produced from plant sources?

With the prevalence of the vegetarian culture in society, some pet owners might opt to give plant-based milk to their pets.

It begs the question, can dogs drink plant-based milk?

Stay posted, and we will find out the answer to this question as we progress through the narrative.

Perhaps before heading on to answer the question, it is essential first to identify the relationship between dogs and milk.

Agreed, that dogs consumed milk as the primary source of nutrients as children, but is it appropriate to feed them milk as they age?

The Relationship Between Dog and Milk

As puppies are born, they heavily rely on their mother’s milk as their food source.

It is perfectly normal, given their lack of digestive enzymes and mechanical capacity to digest solid food.

Lactase, or the enzyme responsible for breakdown milk, is very abundant in their stomachs at the pre-weaned stage.

After weaning, however, especially when dogs can now consume solid food, lactase production in their body becomes significantly diminished.

Most of the dogs that have not consumed milk as they grew older have a high chance of lactose intolerance.

Ergo feeding dogs with milk at this point is counterintuitive and problematic.

Not only will they fail to digest such food, but they will also suffer some repercussion as follows:

Before finding out if plant-based milk is safe for dogs, better known first if they are lactose intolerant or not.

There is no point in knowing which veggie milk is better if they cannot drink milk in the first place. 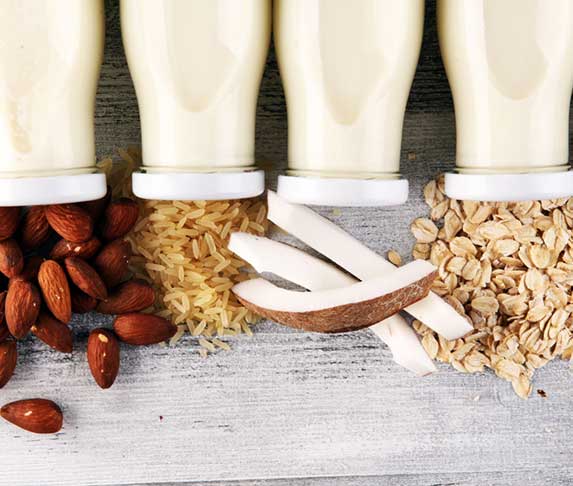 They have been the producer, time and time again, of milk for commercial production.

But with the existence of plant-based milk, what is the difference between the two?

For starters, the more discerning crowd will know that plant-based milk is obtained from – yes, plants.

The plant source of milk can vary, currently, in the market, the ones dominating in plant-based milk department are:

Cow’s milk is the prime source of milk for commercial uses because of its nutritional content.

They are high in calcium and protein and other nutrients such as riboflavin and potassium.

Plant-based milk, on the other hand, is lower in terms of general nutritional value.

The closest to cow’s milk is calcium-fortified soy milk, but these milk sources rely on calcium salts to supplement the nutritional value.

Then again, boosting the calcium won’t improve the other components.

Plant-based milk is produced with lesser carbon footprints compared to raising cows for milk production. So environmental sustainability is on the plants’ side.

Cow’s milk tastes more natural and delicious than plant-based ones. Given that the latter uses many artificial additives to mimic the taste of milk, giving them an off-taste.

Yes, whether they are lactose intolerant.

Although their stomach will mishandle massive amounts, the taste of a few tablespoons as a treat will linger to the tongue and not cause any discomforts.

But then again, as mentioned above, plant-based milk is less natural than regular cow’s milk.

If so, will it be safe given the preservatives added to each plant milk drink based on the manufacturer?

Which Plant-Based Milk Is Safe for Dog Consumption?

Although they use preservatives and additives to plant-based milk to give that milky vibe.

Some varieties are safe for Fido consumption in minimal amounts.

The following are the safe plant-based milk for dogs:

This kind of milk is produced by grinding up soybeans and mixing them with water.

It is nearest in terms of calcium content to cow’s milk, provided a few integrations to calcium salts.

It also has high vitamin A content, as well as vitamin B, folate, and retinol.

They are safe for dog consumption as a tablespoon treat.

But make sure first that your dogs are not allergic to such, because it may pose problems if they are. But generally, they are safe.

Another one that is proven safe is cashew milk.

Made by mixing ground cashew nuts and water, they are very nutty in terms of flavor.

These milk sources are also high in vitamin B2, vitamin B12, and vitamin D.

Just make sure to provide in-minute amounts like the previous one.

Oat milk is the most fiber-rich milk as they are cereal-based.

This milk is also rich in calcium, vitamin D, and riboflavin.

They can be safe for consumption for dogs.

The only precaution is to provide them with minimal amounts, depending on their sizes.

Since fiber is rich in this kind of milk, it may pose stomach upsets, especially if served in large quantities.

It is the least healthy kind of milk because it is generally inferior in nutrients.

Nevertheless, it is safe to give to dogs in moderation because the sugar of rice milk is a bit on the higher end.

Almond milk is produced the same way as cashew milk.

It is one of the most popular ones and is safe for dog consumption but in moderate amounts as these are high in fat content.

This kind of milk is very nutty and creamy inconsistency.

It offers various kinds too.

Make sure to give your dog in moderation and the unsweetened version.

The above are the most common types of milk you can give dogs in moderation or as a treat.

Do not give them daily to prevent stomach upsets, and make sure to check their status after provision to know if it is appropriate or not.

Stay off from coconut milk as it is high in oil which can cause stomach upsets!