But do dogs have a liking for peppers, or more specifically, ghost peppers; and can they eat them?

What are Ghost peppers?

Ghost peppers are also known as Bhut Jolokia and originate from India.

The reason it is called a ghost pepper is that when you first taste it, it tastes sweet and smoky but about thirty seconds later; the heat builds up and appears almost out of nowhere like a ghost.

This heat lasts from between fifteen to thirty minutes.

The hotness of peppers can be measured on what is called a Scoville scale with Scoville Heat Units (SHU).

The bell pepper has zero SHU, the jalapeno and chipotle peppers have 10,000 SHU each, while the ghost pepper has 1,041,427 SHU, the first pepper to measure over a million SHU.

But it is not the hottest pepper on the scale, that title goes to the Carolina Reaper which is 2,200,000 SHU.

Snd there are a handful hotter than the ghost pepper but less than the Carolina as well.

What Varieties Of Ghost Peppers Are There? 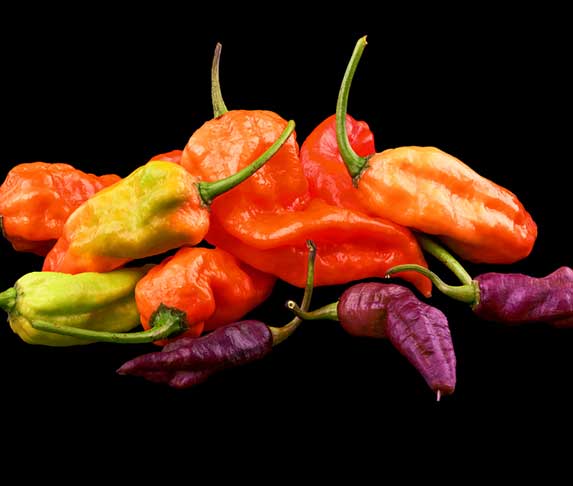 Ghost peppers are all cone-shaped and bumpy but there are different colors and varieties of ghost peppers, along with different sizes, flavors, and degrees of heat.

Seven have been found so far.

They are the most well-known and the spicy of them all. It is three inches long and one inch wide.

It is like the red variety but not as spicy.

These are bigger than the typical ghost pepper at four to six inches long and are usually used in hot sauce.

It is more off-white or yellowish in color with smooth skin, tastes like the red variety but with a citrus flavor.

Also called chocolate ghost pepper, they are more pungent but do not taste like chocolate.

They taste a lot like the red variety but with some sweetness.

It is as hot as the red variety but with a fruity taste.

These are the smallest of all the varieties and are milder in hotness than the red variety.

Why Does My Border Collie Growl At Me? (5 Reasons)

When Your Dog Eats a Ghost Pepper?

Can dogs eat ghost peppers? Yes and No.

As stated somewhere above bell peppers have zero SHU and dogs can eat the sweet red bell peppers.

They are sweet and are packed with vitamins and minerals that are good for your dogs.

1. Ghost peppers on the other hand are not safe.

Capsaicin is the organic compound in peppers that makes them so hot and spicy.

2. However, people, as well as dogs, have different tolerance for the peppery sensation.

With humans the burning would be on our lips, skin, eyes, and mouth area; anywhere the pepper juice touches.

And if hot enough can cause actual burns internally.

3. For dogs, it can lead to stomach upsets, diarrhea, vomiting, irritate the eyes and nose, burns, and other adverse effects.

Swallowing a whole pepper may cause intestinal damage in dogs and humans.

4. Biologically dogs do not really taste their food, they rely on smell and they have about a tenth of the tastebuds we have.

This leads people to erroneously believe dogs cannot taste peppers but the spiciness of peppers is the heat from the capsaicin reaction.

Dogs in fact are much more sensitive to the heat of peppers than we are, so a meal that is not so hot to us may be extremely hot to them.

Signs Your Dog has had a Ghost Pepper 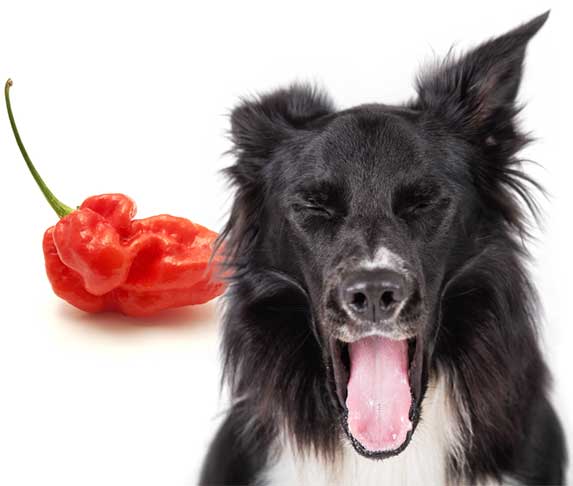 It would present itself in any of the following signs:

If the pepper is affecting their stomachs vomiting and diarrhea will be present.

What to Do When Your Dog Eats a Ghost Pepper?

1. You will have to call the veterinarian as soon as possible and let them know what type of pepper was ingested and what your dog’s reactions are.

They can advise you on what to do or if you need to bring your dog in for treatment.

2. While placing the phone call or waiting you can help your dog alleviate the pain by giving them milk for some relief from the burning sensation in their mouth and their throats.

3. If they are showing signs of their eyes hurting you can use a washcloth to clean their face and their hands in case some pepper residues are there.

So they do not reapply the pepper to their face.

How To Prevent Your Dog Eating A Ghost Pepper?

With all this, you should be able to safely enjoy your spicy meal with ghost peppers without getting your dog in harm’s way.

Have some milk on standby just in case.