Is your dog a curious one that scrounges everything outside from plants to everything that falls from trees including seeds?

It might be time you are mindful of what they pick up from under these trees.

It could be the difference between your dog getting poisoned.

What Are Queen Palms And Their Seeds? 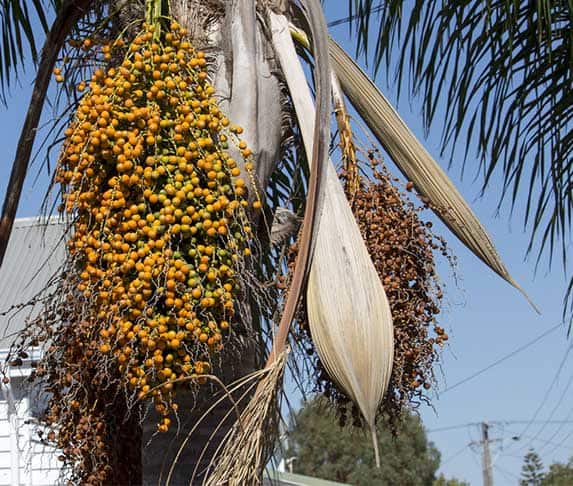 The Queen Palm has a scientific name of Syagus Romanzofffiana and is native to Brazil but is a local plant in the tropical regions of the United States and most tropical countries.

The tree grows up to fifty feet tall and twenty to thirty feet wide, with its palm leaves growing to ten to fifteen feet long.

A yellow to orange fleshy fruit, about ½ inch to 1 ½ inches in diameter, when ripe is produced and drops to the ground.

The fleshy part of the fruit is sticky and sweet, surrounds a hard nut that is mostly indigestible.

The fruit dropping on the ground can be messy and sometimes attract flies and yellow jackets.

What Are The Hazards?

The good news is that the fruit is not poisonous to dogs when they ingest it.

And a few dogs do ingest it, as they cannot resist the color and then the sweet taste.

But the fruit can give your dog an upset stomach especially when they ingest many rather than one or two at a go.

There are reports from owners online who have had their dogs vomit and have diarrhea after ingesting at least fifteen of these fruits.

There is also a further hazard of choking or intestinal obstruction especially for smaller dogs who swallow the fleshy nut whole.

Should I Leave Music On For My Dog At Night? (+ What Kind of Music & Genre)

But Why Is It A Problem?

Despite not being too dangerous,  the resemblance of the fruit to other palm fruits is where it can be fatal to your dog.

These are some palms to note:

They all produce fleshy fruits similar to the Queen palm in varying shades of yellow to red.

They can easily be mistaken for the Queen palm’s fruit by dogs who are used to it and humans who might allow their dogs ingest the fruits.

The Queen Palm you can encounter in backyards and parks because of its beautiful tropical foliage.

It would be easy to run into any of these plants/trees in public so as an owner it is on you to be able to identify these palms and know which is safe for your dog to approach.

How To Protect Your Dogs?

1. So your dog does not ingest the wrong fruit, it is best to stop them from foraging outdoors if you can.

Even if you successfully identify the queen palm and its fruits, it would be harder to get your dog to not eat a similar-looking fruit found elsewhere.

2. Identify the palms in your home and your backyard to know how safe they are.

Sweep up the nuts as soon as they fall and dispose of them safely so your dog is not tempted.

3. Be familiar with unsafe palms so you can identify them in the public park.

So you know whether to keep your dog on a leash or direct your dog to play far away from where the palms are located.

And If Your Dog Eats A Queen Palm Nut.

The worst effects will be vomiting and diarrhea if they ingest too much but just a stomach upset if the nuts are few.

Just in case it was not queen palm nuts that were ingested, you should know the signs of poisoning.

For some of the palm nut poisons, it affects the liver so signs of liver toxicity include Jaundice, cirrhosis, and excess fluids.

If you notice any of these it is best to visit your veterinarian immediately.