Learning new languages is hard for most people.

It is, however, not as hard for dogs as it is for humans. A language is a form of communication through words.

When training our dogs through words, routines, and gestures, we form a communication pattern with them.

Dogs do understand language. That is why we can easily communicate with them and tell them what to do. They process language by taking our words and messages and assigning meaning to them then, doing the action.

Below is more on the relations between dogs and language as a social construct.

History Of Dogs And Language 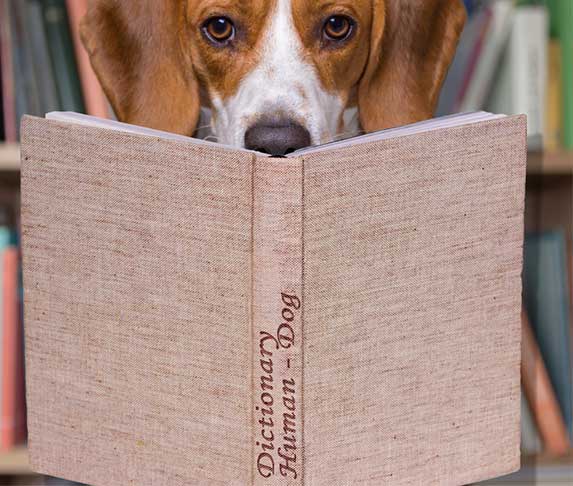 Hunting and hound dogs are at the bottom of the list.

It makes them wise when learning human language.

When intelligence tests were done, researchers found out that a dog knows an average of 165 words.

This is estimated to the same number of words known by a two-year-old child.

For your dog to learn and master a specific language, it is easier to associate the words with actions.

Also, repetition of the word will help them master command.

A study was carried out by researchers who involved thirteen family dogs.

Familiar verbal words of praise were said in friendly and neutral tones, identical to the foreign words.

When the dogs heard the familiar words, regardless of the tone, the left side of the brain lit up — proving that they were processing the language communicated to them.

As for tone, the reward part of the brain was stimulated when they heard the praising phrases.

Concluding that, dogs can understand what were are saying and the tone we use.

Teaching Your Dog To Understand Language 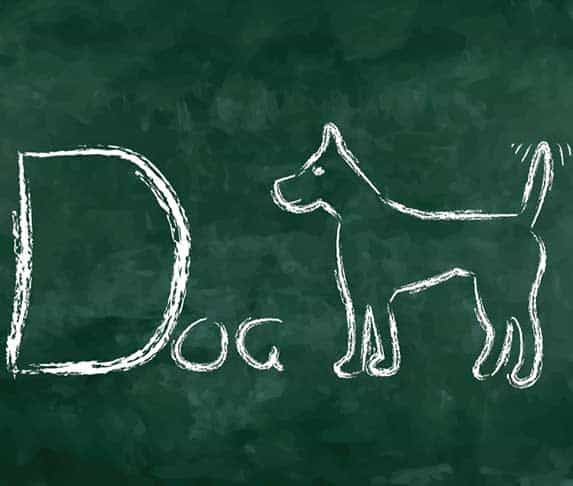 Dogs can understand any language you communicate with them.

Be it French, Spanish, Italian, or Arabic.

They can understand different commands in up to ten languages.

Although, it is not like they take a book and read at night when you are asleep or putting the words in a repository in mind or quizzing themselves.

Dogs comprehend language through the association of words.

Your relationship with your dog is essential and relies on building good obedience when teaching your dog crucial words.

As you train your dog to be obedient, you will be able to establish a language system of words and non-verbal cues.

Making your dog confident, playful, and secure, and eventually, you will have a safe relationship with your dog.

You should not use harsh words when teaching. Saying “No” to them is enough correction.

Instead, use treats such as food and verbal praises. Always keep the training short and fun.

The training procedure you use should remain consistent.

When you tell them to sit, they understand that they are supposed to plop their haunches down on the ground.

When they obey the command, they expect a treat or a “that’s a good boy.”

They know any word associated with the word “vet” means they have to go to that place where they are pressed and poked.

They know it is a bad place.

This means your best friend can learn one word in as many languages as possible through the association of words.

If you tell them to sit in Portuguese (sentar) and in Italian (sedersi) they will associate the two words together through your gestures.

It is a bit little confusing learning one command in different languages.

Continuously using the language will have them master the different commands.

In no time, your dog will be sitting in German and standing in Russian.

It is advisable to use other different languages to teach various commands,

It is effective to agree on one language of command for the training sessions in a multi-lingual home.

This speeds up the training sessions, and you may move to the next language after the dog has shown they understand the commands.

If you start training them to sit in Portuguese, you should continuously use Portuguese.

If you are planning to leave them under someone else’s care, you should inform them of the language of command.

It is recommended that you use universal languages when first training them.

Later, when training them to do special tricks, you can then introduce all the languages you wish.

Can Dogs Smell Another Dog’s Ashes?

The Trick For Teaching Several Languages For One Command

Non-verbal commands are the best trick to use when you want to teach them the same command in different languages.

The cues give your dog a better understanding of what you want them to do.

For example, when you tell them to sit, the most relatable gesture would be pointing your finger on the ground.

He will associate the word to the motion.

Eventually, you will stop using words and only use hand gestures, and they will understand that hand gesture means to sit.

After this, you can use another language and use the same gestures to understand the command.

You will need to give many treats and verbal encouragement because this is not an easy task for them.

Benefits Of Teaching A Foreign Language To Your Dog

As much as teaching your dog a new language seems a bit off especially if they understand what you say to them, there are a couple of benefits to training your dog in a foreign language.

Below are some of them:

1. Languages such as French and German are used often in training because of their distinct tones and inflections.

2. Learning a new language is a fun activity for both the dog and its owner.

It promotes essential mental stimulation as it also strengthens their relationship.

3. Teaching a command in a different language is an easy way to “start over” with behaviors that allow the dog to learn more effectively and differently with no associations interfering.

Do not underestimate the capability of your dog to understand languages.

Although, the training sessions should be short and consistent.

Use treats and positive praises during the training since it can be confusing for them.