Isn’t a cat’s affection the most beautiful thing ever?

They rub their silky fur on you, purr softly, and before you know it, they give your nose a lick.

Admittedly, it tingles and leaves you in giggles, but you also wonder, “What does it mean when your cat licks you?”

Okay, forget that time Whiskers was slurping bits of peanut butter off your face.

You probably have wondered, “Why does my cat lick my nose whenever they are close to me?”

Your cat will lick your nose to show affection. This behavior is likely to happen when you are petting them or if the cat is relaxing on your shoulder. While the occasional licking is harmless, excessive licking behavior is a sign of an underlying physical or emotional issue.

To understand what it means when a cat licks you, we have to explore what the lick means in the feline world.

Cats will lick themselves for the following reasons;

Cats are by far the cleanest of pets.

They will lick themselves while grooming to get rid of dirt and to keep their coats neat.

This instinct is passed to kittens by their mother who grooms the litter until the kittens are weaned.

When they were kittens, licking was a way to bond with their mother and other littermates.

Licking is also a cat’s way of marking its territory.

Cats carry lots of pheromones on their pee and saliva.

They will lick their feeding bowl, toys, and even favorite sleeping spot.

They do all this to mark their tuff.

What does it mean when your cat licks you? 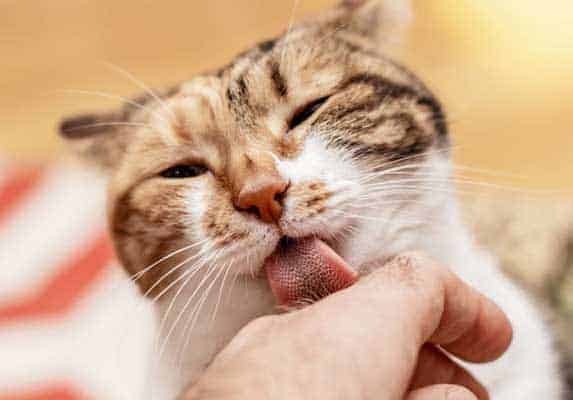 Cats will lick humans for the same reasons they lick their fellow felines.

Also, a cat could lick you if they discover an interesting taste on you.

They are showing affection

Though cats are very independent animals, oftentimes they will crave human attention.

They will wait until you are settled down then slowly wiggle their way into your loving arms.

I have felt cats rubbing their faces against mine and touching my cheek with claws carefully sheathed. These things, to me, are expressions of love.

Head rubbing and face licking are your cat’s way of saying “I love you human”.

To show their affection further, some cats will continuously rub themselves on you while purring.

If you live in a large family, whoever gets the most face licks is the cat’s favorite.

They are grooming you

Yes, sometimes cats will like your face to keep you clean.

Cats groom themselves every day and all the time.

This grooming session starts from the head to the tail.

Two cats, that love each other, will lick each other to hasten the grooming process.

So, when Whiskers grooms himself, he will occasionally turn and give his favorite human a mini-grooming session.

When he stops, he believes you are clean enough.

They are marking their territory

If you live with more than one cat, there is bound to be competition among the felines for your affection.

In such scenarios, the dominant cat will scent mark you to keep other cats away.

You will notice that other cats won’t lick you because they can smell the scent of the other cat.

Cats carry pheromones in their saliva and paws.

While the dominant cat is licking your nose, they may also knead with their paws to transfer more pheromones on you.

You are officially marked as private property and any other feline that comes close to your face is an intruder.

Why Does Your Cat Lick Your Hair?

They are seeking comfort

Cats will lick your face too if it is comforting to them.

This is especially true for kittens that got weaned at an early age.

If you have watched a mother cat interact with its litter, you will notice how often she licks her kittens.

Cats may seek comfort through licking if they have a physical or psychological problem. Psychogenic alopecia is one of those diseases that causes cats to lick a lot.

A kitten that is weaned off early will try to recreate this act of affection.

Licking your face could be their way of holding onto the lost mother-kitten bond.

When your kitten does this a lot, show it affection through petting and playing with it.

The licking habit will stop or minimize.

They want your attention 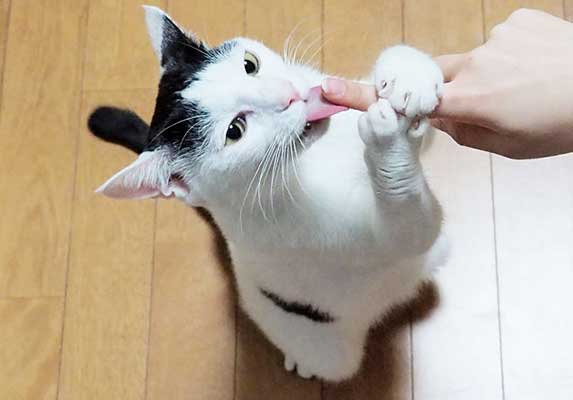 Cat licking your nose could be a sign that they want your attention.

It could start with circling your feet and rubbing themselves against you.

If they get high enough, they cannot resist the urge to lick you.

They probably want to play or be fed. 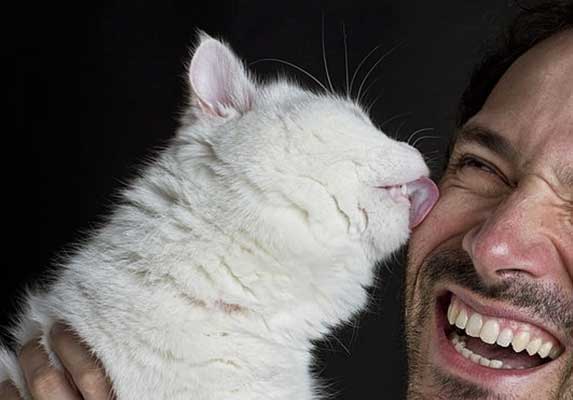 Cats can taste salts on meat and, interestingly, your face.

If your face is sweaty, consider yourself a prime target for a dozen feline licks.

Cats process scent with their tongue in what animal experts call The Flehmen Response.

The cat will lick you, stick its tongue out, and put it back in its mouth.

They are trying to interpret this new scent on you.

There you have it. Now you know why your precious feline loves to lick you.

It could be a sign of affection, an opportunity to groom you, or a way to mark you as off-limits.

And if you have an interesting taste on your face, your cat will lick that too.

Why does my cat lick me when I sleep?

Your cat is trying to get your attention. They will lick you so you can wake up and feed or play with them. Circling and rubbing themselves around your feet is always a call for attention.

Cat licking and biting, should I be concerned?

It is normal for cats to lick and bite at the same time. The bite is a gentle one and a sign of affection. But if the cat bites too hard or claws you, it could be a behavioral problem.

Should I allow my cat to lick me?

Cat licking nose or any other part of your face is a sign they love and trust you. By all means, let them go at it if they please. But people with cat allergies should not let cats lick them. The protein in cat saliva can cause serious allergies.

Cat licking nose a lot, what should I do?

If your cat licks you occasionally, it is a sign of affection and there is nothing to worry about. But if your cat is licking you or itself excessively, it could be a sign of stress or anxiety. Vets call this condition psychogenic alopecia.