Cat End of Life – What You Should Know

Let’s be honest, every living thing has a specific life span and the average cat lifespan is somewhere between twelve and twenty years. For this reason, most owners form an incredibly tight bond with their […] 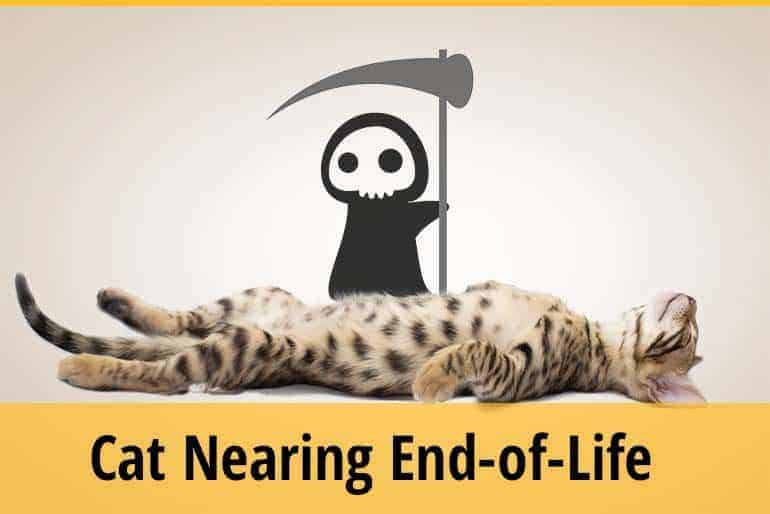 Let’s be honest, every living thing has a specific life span and the average cat lifespan is somewhere between twelve and twenty years. For this reason, most owners form an incredibly tight bond with their beloved pet and often fear the worst when it comes to illness or rather strange behaviour.

It’s true, cat owners can unnecessarily fear the worst when they spot certain symptoms but at the same time, these symptoms or signs should always be taken seriously.

In this article, we take a look at some common signs associated with cat nearing end of life and what you should know about the lifespan of your cat.

While it’s common to wonder if cats can get conjunctivitis or the meaning behind catloaf, there’s no reason to assume that any one symptom is a sign of cat nearing end of life. With this in mind, here are some of the most common reasons you might want to take your cat for a checkup.

1. Your Cat is Weak or Especially Lazy

2. Your Cat is Colder or Hotter than Usual

In the latter stages of the cat lifespan, you should notice a change in body temperature. More specifically, both the ears and paws tend to be cold and even below 100 degrees. While this is normal in very hot or cold conditions, these signs of extremity will also happen in normal temperatures.

How To Determine Snake Plant Poisoning in Cats
Warning: A non-numeric value encountered in /home/zooaweso/public_html/wp-includes/media.php on line 648

3. Your Cat Has Stopped Eating or Drinking

Lack of appetite is something which often happens when a cat is nearing end of life. However, your cat may have stopped eating or drinking due to a non-life threatening illness. For example, snake plant poisoning or even nibbling orchid plants can have the same impact on the behavior of your cat.

Either way, loss of appetite is a clear sign that something can go wrong and will likely lead to dehydration which is usually present in the final stages of a cats life.

4. Your Cat is Behaving Strangely

Behavior is very different during the cat pregnancy stages but strange behaviour is sometimes very obvious to the owner. That is to say, clinginess and strange social behaviour can suggest your cat might be nearing the end of his/her life. Now, that’s not to say we can easily identify ‘strange behaviour’. After all, we already know why cats lick their owners hair and scientific studies have also explained why cats lick each other.

5. Your Cat Smells Bad or Looks Rather Disheveled

As you know, cats spend a lot of time grooming but this effort decreases significantly toward the end of the cat lifespan. When you think of it, dehydrated cats or those with less energy are less likely to keep up with grooming. With this in mind, cats that stop grooming or appear especially disheveled might be ill in some way or approaching the latter stages of the cat lifespan. Needless to say, this lack of hygiene will also result in a bad smell which most cat owners should notice pretty quickly.

6. Your Cat Has Started Hiding Around the Home

Have you noticed your cat seems to be hiding out? Cats tend to hide in odd places when they don’t feel well. When cats are very ill, they have a natural instinct to hide as a means of protection. After all, they are vulnerable when ill. While this might suggest that your cat is merely ill, this is also a common behavior pattern for cats nearing the end of life.

It’s true, most owners form an incredibly close bond with their cat and end up worrying about every little action by their beloved pet. In reality, many of these symptoms are just a sign of illness and something with which your local vet will be able to help or rectify. On the other hand, it’s always best to play things safe, and you should always seek assistance if your cat displays any of the above.

It always hurts to see your cat falling ill, and they will always appreciate the special attention, whether nearing the end of their cat lifespan or not.