For those looking to escape the mundane and try something new with the pets they raise, one of the more recently popular choices has been the adorable and mischievous ferret.

These animals, most likely for their playful behavior, are popping up in homes much more frequently.

And for those hoping to get one, you may be wondering how your potential new pet might fit in with a dog you may already own.

Or say you already have one, you may be wondering how to best introduce your new pets.

Dogs and Ferrets can live together, although it will require some work. The easiest way to determine if a ferret is right for your home is to first better understand the animal, understand how the breed of your dog might naturally react to it, and be equipped with the knowledge on how to initiate a healthy relationship between the two. 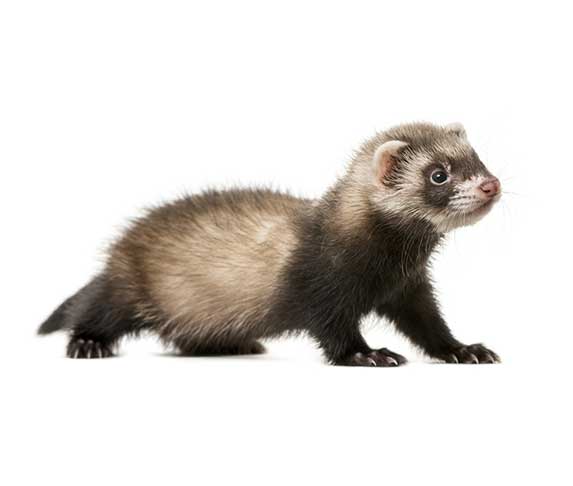 A large source of this animal’s popularity is just how playful this creature is.

Upon getting one, you’ll notice its inquisitive nature.

Most likely catch it exploring your house and gaining a better understanding of its new surroundings.

Better yet, this animal is a very social one as well and can be very keen on making friends.

Some even suggest adopting two ferrets so that one of them doesn’t get lonely.

But this isn’t a necessity and certainly shouldn’t be the case for every household.

Generally speaking, a ferret does best in a house with another ferret.

These animals have not been domesticated as long as others have.

And so don’t have all the innate social skills that a cat or a dog may have.

Funny enough, it’s more recommended to house a ferret with a cat than a dog.

As a cat won’t see the other as prey as much and they’re more likely to be closer in size.

It’s not impossible to house a dog with this animal, however, it does require more work.

Some ferrets may at first be intimidated by the larger animal.

But it’s also likely that its inquisitive nature will pull through and it may be curious about the dog. If it feels threatened.

A ferret will fight to defend itself so it’s best to keep that in mind before rushing into making a decision.

If given the chance to meet the ferret beforehand and understand its personality and how it reacts to other animals, that would certainly aid in a more successful introduction.

Your dog, who most likely has already lived with you for some time now, will be the big decider when it comes to whether or not you can truly raise a ferret in your home.

Even when not considering the breed, it’s best to truly understand your dog.

How it reacts around on both other domesticated animals.

Especially wild animals, since that is most likely how it will see the ferret.

The dog won’t see this animal as just another dog or cat, in some cases, it may even see it as prey.

Even though your dog may have never been taught that, it’s still a natural drive they have.

If a careful introduction isn’t made, the dog might go in and try to attack the new addition to the household.

As stated before, could even get hurt itself from the ferret fighting back.

When walking your dog, keep a careful eye out for wild animals.

See how your dog reacts if one is near, even if it’s just a squirrel or rabbit.

If your dog reacts violently or aggressively, then you know what you might need to train out of it.

So that it can be prepared for the new animal.

However, some dogs will always have that drive in them and it’ll, unfortunately, be up to you to choose either or.

How to Introduce a Ferret to a Dog 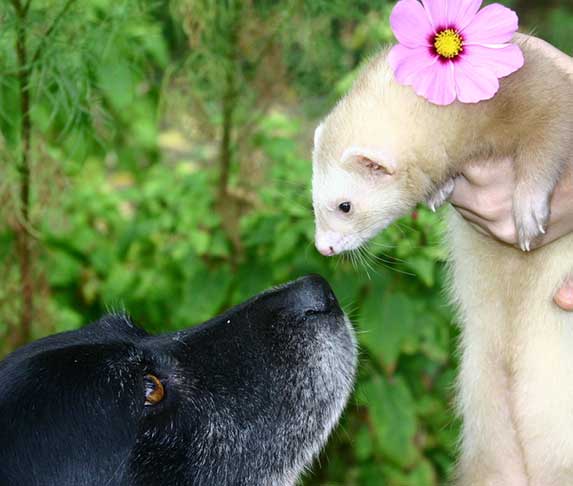 If you’ve decided to go through with bringing in a ferret to a household, the following steps should ensure a peaceful introduction.

But keep in mind, every two animals are unique and some situations could take longer than others.

The best way to begin the introduction is through some form of barrier.

Whether a small fence in the house or putting the ferret in a wild cage.

Both animals need to be aware of the other’s presence and see that they’re not a threat and given the chance to smell one another.

After that, if both animals reacted calmly, then it should be ok to let them get closer to one another.

But the dog should still be on a leash to avoid any accidents.

Show love to both animals to show the other that they are both part of the family and aren’t a danger to anyone.

These steps could and probably should be taken multiple times before they’re allowed to fully live around one another.

One of the later steps you can do to start a good relationship is to have them eat together.

Have them associate that the other eats when they do and companionship will form.

This should be done carefully, however, with both separated from one another so that neither tries to steal food from the other.

Afterward, if both seem calm and willing, there’s no harm in letting them play together and supervising to ensure it’s all love and fun.

What if This Still Doesn’t Work?

This isn’t always guaranteed to work.

As stated before, some dogs have hunting prey in their genes and may never be able to be comfortable around a ferret.

At that point, it’s sadly up to the owner whether to decide between their dog or their ferret.

Having both in the same house without a healthy bond is just asking for an accident.

To avoid this, it’s best to get to know both animals before any big decision is made.

Ferrets, if treated carefully and responsibly, can be great and loving pets and a fine addition to a household.

But if a dog owner wants one, it’s best that they do their research, understand their animal’s personality, and initiate a healthy and effective introduction between the two.