Russian bear dogs are one of the giant dog breeds in existence. If you had a huge canine that is bigger than your average person, you’d think they’re bred as hunting companions, but not this gentle giant.

The Russian bear dog is historically bred as a guardian animal. Do not be put off by their colossal built as they are as loving and kind as your regular-sized dog. They can be the most devoted (and not to mention fluffiest dog breeds) out there when trained well.

We listed below 12 things you need to know about the Russian bear dog! 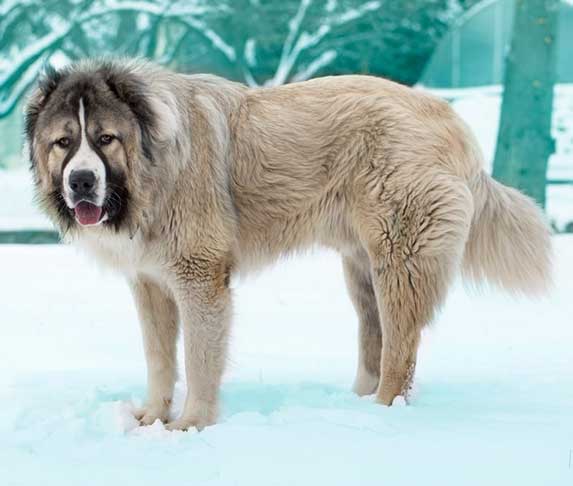 Russian bear dogs, also known as Caucasian shepherds, are stocky and large. Although they are a handsome bunch, some people might find them intimidating because of their immense size.

Males are typically larger than females per usual:

The colors of this breed vary depending on genetics. But typically, they can come in 7 different colors:

Caucasian shepherds are one of those breeds with double coats. The outer coat is longer and coarser, while the inner coat feels soft and delicate to the touch.

On average, these dog breeds live up until 10-12 years.

The exact origins of Russian bear dogs have not been pinpointed yet. Currently, it is known that they come from the Caucasus Mountain Region in Eurasia. The version of Caucasian shepherds that migrated to Georgia is the breed recognized by Kennel Clubs today.

Some researchers claim they descended from wolves. Others believe they were bred from mastiffs and other gigantic breeds like sheepdogs from Tibet. But if there is one detail that they all agree on, then it is that they have been around for approximately 2000-2500 years.

Since these dogs are bred to guard livestock and homes against intruders, they are naturally very protective. Like Malamutes, they are warm and fuzzy with their owner’s family while often distrusting (or aloof) strangers.

Given the size, these dogs are not too hyperactive but still require regular exercise. And they can exhibit ferocious behavior if not properly socialized. More on these two details in a bit!

Cat Keeps Humping You? Read This

A Russian bear dog is one of the most loyal dogs to the family. However, we do not recommend them for families with small children, especially those not fully aware of a dog’s boundaries.

They are gentle giants, but kids who prod too much might annoy and trigger these dogs, which can be unpredictable. Caucasian shepherds are ideal for families with adults or children who know how to respect the sizeable beast.

But in some unforeseen cases, the Russian bear dog may accidentally and unintentionally injure a small child, especially during play, because of their build.

Above, we have emphasized the aloof nature of the Russian bear dog. Since they were bred as guard animals, they would do anything to protect the pack. Expect a loud growl and barking as soon as they notice anything out of the ordinary.

You will need to start socializing them as early as pups to tolerate people who don’t live under the same roof. Introducing them to new sounds, places, people, experiences, and smells can acquaint them better.

Additionally, positive interactions with humans will help cement that we’re not threats to this gentle giant or their family.

The breed leans typically towards the plus side, so obesity is not foreign to the Russian bear dogs. That said, feeding them with natural, high-quality, and nutrient-dense food can ensure that they receive the proper number of vitamins, minerals, nutrients, and antioxidants for optimum growth.

Ideally, food that contains a hefty amount of glucosamine can help fight joint dysplasia, and taurine, which counteracts cataracts among dogs, is helpful. 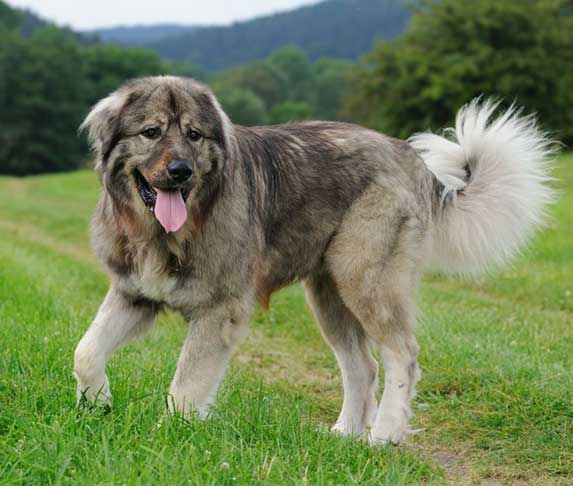 Caucasian shepherds are intelligent dogs. But intelligence does not necessarily equate to obedience, so a good amount of training would help.

Since they are bred as guard dogs, owners usually leave them in the barn to watch over the livestock. So, they are pretty independent as well.

It is best to train them early, as adults are headstrong and a bit difficult to train. You may opt for socialization classes that teach them basic commands like stop, go, sit, and wait.

They are a bit lazy, so their wanderlust levels are low. But they have a hefty energy reserve so utilize that by taking them for regular walks to prevent obesity. It’s best to walk them as part of their training too.

Once they start pulling the leash, stop and wait for them to calm down. Pulling these dogs forcefully might result in a tug-of-war, and you might end up the one they are walking.

Russian bear dogs are tremendous shedders. They regularly shed but typically shed excessively every summer. We recommend brushing their hair 2-3 times a week to avoid knots from forming. Regular warm baths and brushing can help shed their hair faster.

The nails grow fast, so regular clipping prevents overgrowth and cracking. The ears may form wax build-up and debris, so regular checking is recommended. To avoid teeth infections and cavities, brushing at least 3 to 4 times is ideal. Dental sticks may be no hassle alternatives.

Russian bear dogs are generally healthy, but the emergence of health concerns occurs every once in a while, especially with improper management. Here are three common health:

They are not considered endangered species. Current data lists them as a “least concern.”

Prices for dogs are influenced by several factors, including the breeder, the genetic line, and market reputation. However, typically this ranges from $1000 to $2000.

In some cases, Caucasian shepherds may be listed for adoption in some shelters, so the cost can significantly go down to a few hundred bucks.

Although breeding is one part of the cost’s entirety, owning is much worse as your new Russian bear dog will need food, toys, treats, vet care, and other necessary supplies. Factor these in before getting one!

Three dogs are pretty similar to the Caucasian shepherd. These are Tibetan mastiff, Irish wolfhound, and Bernese Mountain dog.

Tibetan mastiffs are similar in almost all aspects like size, protectiveness, and difficulty to train. But Russian bear dogs are better family dogs than they are.

The Irish wolfhound is another gigantic dog breed taller than Russian bear dogs. But they’re not as efficient in guarding as they aren’t territorial, unlike our gentle giants.

The Russian bear dog is a kind family fluff ball that can switch on its ferocity and protective switch when needed. They may be intimidating, but in reality, sweet and loving dogs provide proper training, domestication, and socialization.

They can be excellent family watchdogs and companions, but be sure to look out for potential health concerns and be diligent in grooming and training.