Steal his Mustang, raze his house, beat him to a pulp, but steal his dog and John Wick will hunt you like a deer.

What kind of dog did John Wick have that he made such a fuss about?

From Judo-flipping bag guys to shooting them from interesting angles, we are at the edge of our seats watching John Wick singlehandedly take down an entire crime syndicate.

But all this for a dog?

Well, this pup was special and we are about to find out why. 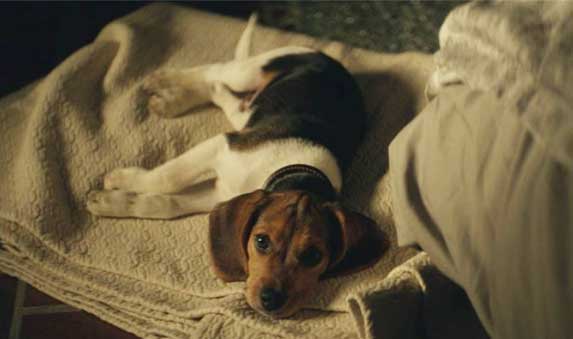 Daisy is the puppy we see John Wick nuzzling at the opening of John Wick 1.

She is a present sent to Wick from his beloved departed wife.

The only thing left that reminds him of her.

When unknown thugs (Okay the same goons he met earlier) storm Wick’s home to still his car, they also murder this innocent Beagle.

This was a big mistake they gravely pay for in the end.

But what type of dog was Daisy?

Daisy was an 8-week old Beagle at the time of shooting the movie.

You can spot her beautiful floppy brown ears picking through the crate the first time Wick gets her.

And when Wick picks her up for an up-close and candid, we get to see the rest of a beautiful black, white, and brown coat.

But don’t be fooled. Beagles can be a handful to raise for a first-time dog owner.

They are stubborn and will take close to a year to successfully house train them.

You also want to potty train a Beagle to avoid accidents in the house.

If you love your Beagle for who he is, you’ll be his best friend

Patience and reward-based training are the best way to a Beagle’s heart.

Obedience training is necessary as well to establish authority.

Leaving them on their own for too long can result in destructive behavior.

A neglected Beagle can easily;

Beagles often fall victim to pet thieves. Do not let your Beagle go out unsupervised.

Be consistent in training and your Beagle will turn out fine.

Focus training and exercises around their impeccable ability to smell.

What kind of dog is in John Wick 2? 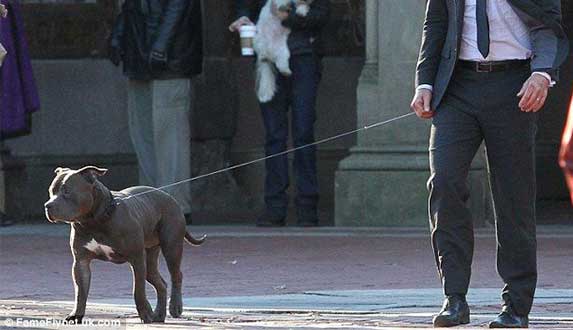 At the end of John Wick 1, we are introduced to another cute fur baby who is a pit bull.

John Wick rescues this dog from a shelter, slaps a collar on him, and they both walk away towards the city lights.

The pity’s real name is Burton and he was chosen for this role because of his somber facial expressions.

And this is metaphoric.

After destroying a Russian mob, John Wick escapes in an SUV and crashes next to an old building.

Upon breaking into the facility, he realizes it is a dog shelter with supplies he can use to patch his wound up.

What are the odds?

Amid mending his wounds, he is drawn to the whimpering of a caged pup.

They lock eyes briefly and there and then he decides to take the Pitbull.

Perhaps Wick sees a reflection of his sadness in the dog.

They both feel lonely because they have no one to love them.

But they now have each other.

Despite the sadness displayed in the dog’s eyes, Pit Bulls are affectionate dogs in real life.

They are not as aggressive as many believe but would make great lap dogs if they did not weigh so much.

We can see John Wick and his Pitty traveling together almost everywhere.

Oh, and in Chapter 2, John Wick finally gives him the name “Bubba”.

What kind of a dog did

We still see a Pitbull in John Wick 3 only that it is not the same Burton we saw.

What kind of a dog did John Wick have in chapter 3?

Wick still holds onto his Pitbull Bubba (a.k.a Cha Cha).

But we are introduced to two other canines in the movie.

A bonded pair of Belgian Malinois dogs who nearly pass as German Shepherds.

Though Shepherds and Malinois are two different breeds, they have many similarities.

From the looks to their extreme loyalty to their owners, it is hard to tell these two dogs apart.

A Belgian Malinois is a medium-sized canine who is part of the famed Belgian Shepherd dogs.

These dogs were originally herders before getting new roles in police and military work.

You can see how Sofia’s soldier dogs take down bad guys with finesse.

We momentarily lose our breath when one of the Malinois dogs is shot and dies.

But he springs back to action later and we realize he was wearing a vest. Impressive!

There you have it! These are the main John Wick’s dog breeds we get to see in the three movies.

Perhaps we would get to see more canine action and cuteness in the anticipated sequels.

But if you love Beagles, Pitbulls, and Malinois Shepherds, then you gotta love John Wick!

Does John Wick own a dog in real life?

John Wick, played by Keanu Reeves, does not own any dogs in real life. But he is privileged to start along with dogs in the John Wick movies. Keanu is a motorcycle collector in real life.

Does the dog die in John Wick 1?

Daisy the Beagle is named Andy in real life. The dead of the dog is used to shape the character of John Wick. Daisy may be dead but Andy is very much alive today.

Does any dog die in John Wick 3?

Fans are treated to a moment of shock in John Wick 3 when one of the Belgian Shepherd is shot and falls to the ground. But the dog’s bulletproof vest stops the bullet from causing more harm. We get to see the two Malinois dogs in action in the subsequent fight scene.

Daisy gets killed by gangsters who invade John Wick’s home to steal his car. She was a puppy Beagle gifted to Wick by his deceased wife. The death of Daisy is the last straw that pushed Wick back to his past dark life.