The most desired colors for a German Shepherd are tan, black, and red.

But other German Shepherd colors are rare but equally exquisite.

We have put together a complete list of the GSD dog colors for you.

German Shepherd dogs have six main colors for their coats. They are black, sable, black-tan, red-black, sable, and grey. Rare hues are the white, blue, and liver colored German Shepherds. The rare colors, except white, are not recognized by the American kennel Club.

Black, tan, and red are often what we consider as the different colors of German Shepherds.

But some German Shepherd dog puppies are born with rare coat colors that are considered as genetic defaults.

Before we get to the GSD colors, first we look at what causes this rare coat pigmentation.

All other coat colors are derived from these two pigments.

An Austrian Monk inspired the field of genetics after studying pea plants.

Secondly, melanin cells known as melanocytes determine how rich the coat color will be.

These cells anchor to hair follicles and add melanin to the hairs as a German Shepherd puppy grows.

As more melanin is added to the hair follicles, the richer or darker the coat color will be.

The production of melanin is not always at a steady rate. This is why the topcoat can be a lighter shade while the base coat is darker.

Gene mutation occurs within an area in the chromosome called locus.

Colors of a German Shepherd 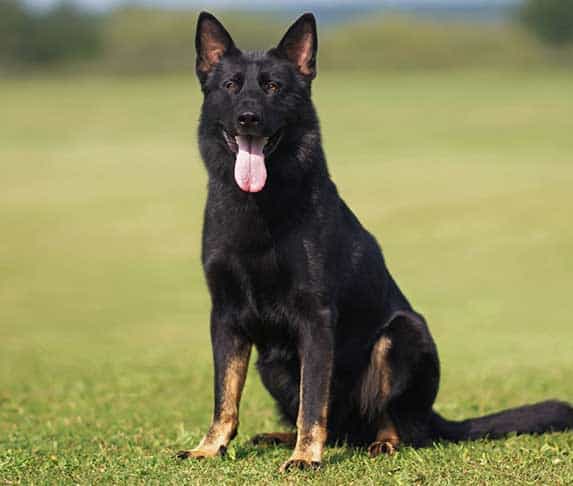 Aside from being obedient, loyal, hardworking, and protective, German shepherds are well known for their majestic appearance too.

The interesting thing is, these German shepherd coat types which vary from white, blue, tan, and even a black and red German shepherd, have nothing to do with their behavior, health conditions, and temperament at all.

Most common colors of German Shepherds

The most common colors of German shepherds include:

A black and tan bi-color German shepherd is the most common coat color, wherein the “black” usually appears on their back and looks like a saddle, while some appear on their face and look like a mask.

Of course, the reddish-brown pigment is definitely clearer (and bolder) than the one that is tan which appears “paler”.

There are also those which are considered faulty or unaccepted colors. Do take note that when we say “faulty”, this means that it does not match the breed standards for dog shows.

Here are the different colors of German Shepherds you should know of;

This is the most common German Shepherd color.

The Agouti and Extension loci are responsible for this coat color.

The black color appears on the face as a mask and a saddle-like patch on the back.

Black accents are maintained on the tail and neck too.

Tan colors are commonly on the underbelly, legs, chest, and neck. German Shepherd puppies can be born with light or dark tan tints on their coat. 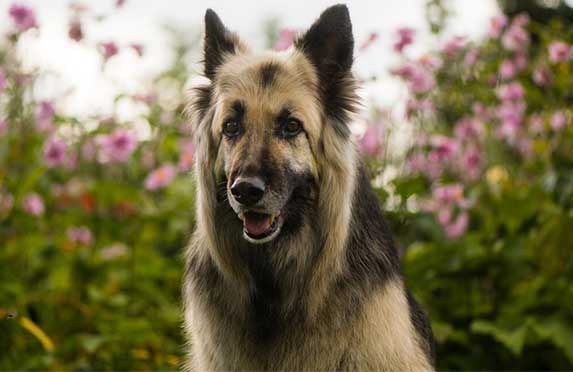 Here the coat is a pale brown, or cream, color with dark saddle accents.

The Dilute gene locus is responsible for this coat mutation.

Most German Shepherd breeders and enthusiasts consider this an odd color. 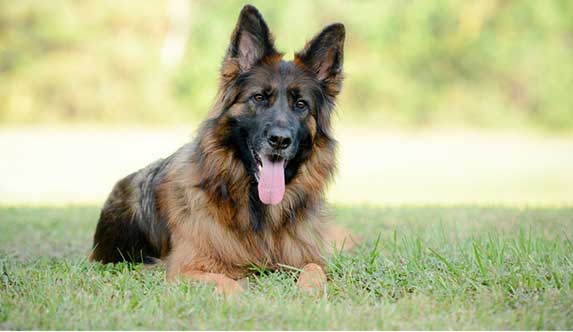 This coat resembles the Black and Tan coat but the tan is replaced with a mahogany-red hue.

There is more red melanin in the hair follicles creating the “deep red” accents.

It is the richest coat on a German Shepherd and the most revered by GSD enthusiasts.

Also, the red accents have a lighter shade that mimics strawberry blonde hair. 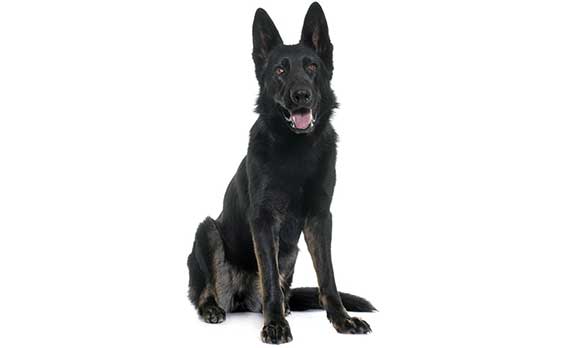 Like the red German Shepherd coat, the all-black coat is equally striking.

To achieve this coat, both parents should possess the recessive black gene.

It is extremely rare to come across a pure black German Shepherd dog.

Breeders or owners of pure black Shepherd dogs are usually proud of their achievement. 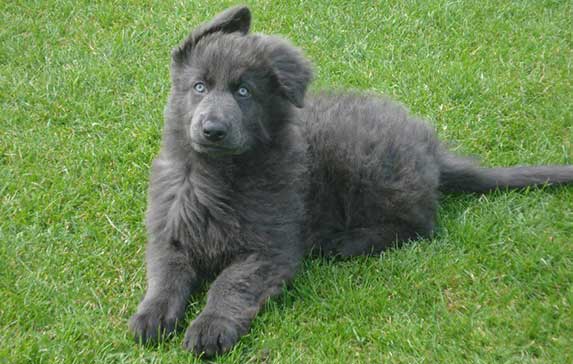 This is another rare Shepherd dog but not as popular as the black shepherd.

A Bluecoat on a shepherd is considered a genetic defect, therefore, not recognized by breeders or official Kennel clubs.

The Dilute locus pales the black Shepherd coat to a bluish or grayish color. 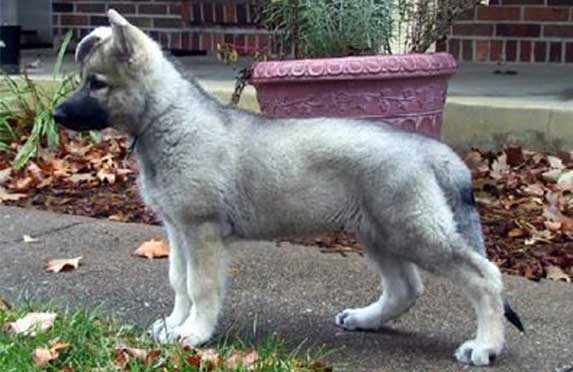 Gray Shepherd dogs are a washed-out version of the sable Shepherd.

But there is no distinctive version of the grey coat and sometimes, blue and silver shepherds are confused as grey.

Though grey is not common on a Shepherd, it is still recognized by the American Kennel Club.

A unique feature of grey shepherd puppies is their enchanting blue eyes.

Sadly, the gorgeous blue turns to light or golden brown as the puppy matures. 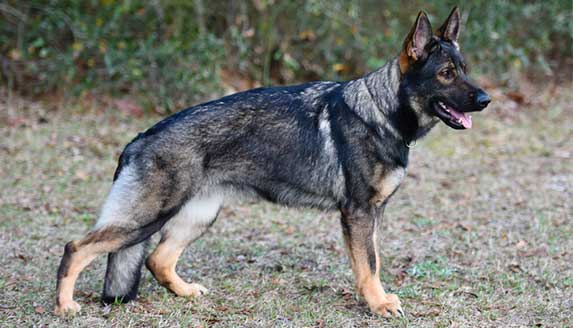 The Sable shepherd dog coat is considered a classic because it resembles that of a wolf.

At a glance, the coat looks greyish but on close inspection, you notice an array of banded colors.

The hair tips are pure black while the base is greyish or reddish.

There are many other variants of the Sable Shepherd dog;

And that’s the tip of the iceberg.

There is bound to be more Sable-variants of the Shepherd dogs out there. 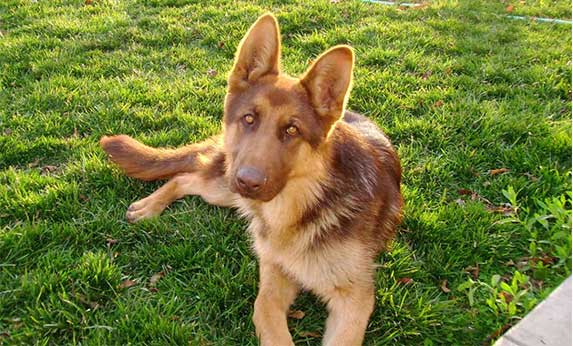 A liver-colored German Shepherd is another rare sighting.

What we describe as a liver-colored coat is more of a rich brown leather hue.

The nose and paws of a liver colored German Shepherd have a rich brown color as well.

This color is not recognized by the AKC either. 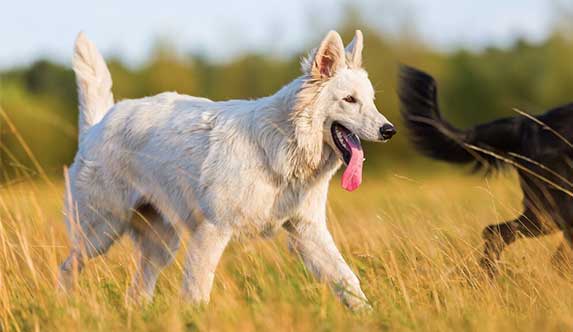 A White Shepherd is often confused as an albino.

But this is not the case because his coat does not lack melanin.

It only lacks enough melanin to influence coat color.

Scientists believe the white German Shepherd is birthed from a recessive gene from both parents.

The only way to achieve white shepherd puppies is to mate a white male and white female.

The white Shepherd dog is not yet recognized by the American Kennel Club as well. 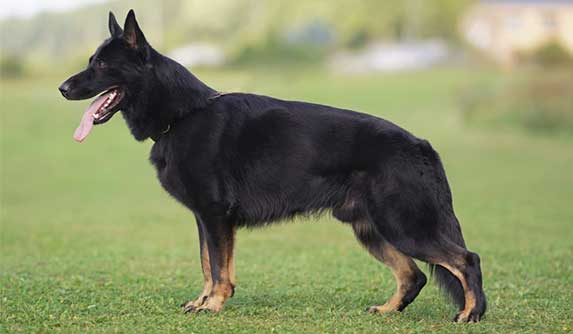 The dominant color is black with tan accents on the face, neck, and back.

In the dog’s genetic makeup, the ratio of black to tan color is 9:1.

But as the puppy grows, other colors begin to show on the coat albeit minimal.

A Bi-Color shepherd dog can inverse the 9:1 ratio rule.

For example, a German Shepherd Rough Collie mix has a bi-colored coat with more brown than black color.

His name says it all. He has a coat color that looks exactly like that of a Panda.

A Panda shepherd is achieved by breeding a pure black mother and a black & tan father.

This gene mutation is so rare that the Panda Shepherd is considered a bloodline.

Puppies are born with black and tan colors.

But if the puppy has a Merle or Harlequin gene, tiny spots of white start showing as the puppy ages.

What color would you love your German Shepherd dog to have?

Besides the usual Black and tan color, a German Shepherd has other color variants like Black-red, Black-cream, and Bi-Color.

Although they are used for police work, German Shepherd dogs are teddy bears at heart. They are affectionate and will snuggle up with you on the sofa. But if you have pet allergies, then cuddling with a Shepherd dog is not a good idea.

Will my German Shepherd protect me without training?

German Shepherds have a protective instinct to guard those they love. But not all Shepherd dogs will have this instinct as some would rather be friendly and playful. Training your shepherd dog is a good way for bringing out his guard dog abilities.

How do I know my German Shepherd is purebred?

Examine the dog’s coat. A purebred German Shepherd will have a coat with dense hairs that sit close to the body. Also, purebred Shepherd dogs have three coat types; plush, double-coat, and long-haired.

Are there other different colors of German Shepherds?