Have you ever wondered what would result if you could crossbreed a wild animal with a domesticated one?

Well, one combination that may not instantly come to mind would be a pair of cats.

Only the mixture would be a wild African cat known as the Serval. The domesticated cat would be say, your Siamese house cat.

Aside from the obvious difficulties in getting the pair to actually mate, what would their offspring look like? 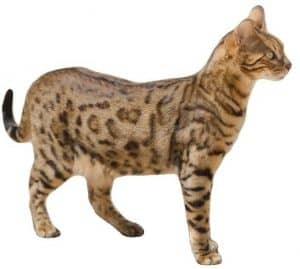 A Savannah cat is a cross between two very different kinds of felines. One half of the cross is the African Serval, which is an exotic cat.

The other half of the cross is from a domesticated house cat. What sets a Savannah apart visually is that they have a tall and slender body coupled with large ears.

This breed of cat is relatively new having originated in the late 1980’s. It has only been made possible thanks to the successful breeding of a Serval & domesticated cat. It is because of this unusual pairing, which produced such a stunning creature, that the Savannah is gaining in popularity around the globe.

The first Savannah cat was born on April 7, 1986. A male Serval, owned by Suzi Woods, was crossbred by Judee Frank with a domestic Siamese house cat.

That first Savannah was named Savannah and the name stuck.

It wasn’t until 1996 when the original version of the Savannah breed standard was written.

Patrick Kelley and Joyce Sroufe composed it and presented it to TICA (The International Cat Association). The breed was accepted for registration by TICA in 2001.

Although Savannah cats are truly a hybrid breed, they are classified by the amount of each breed they contain.

The letter ‘F’ is used to signify a Foundation Savannah, which is the first generation resulting from the Serval/domesticated cat breeding.

The percentage figures used with each subsequent generation are just estimates with the numbers actually being higher if Savannah x Savannah breeding occurs in the family tree.

There are actually several trait differences in Savannahs depending on the generation they happen to be from. Here is a general breakdown of what to expect from each Savannah cat generation.

F1 Savannah cat – This is the generation that is closest to the African Serval and as a result cats in this category will require more attention than following generations.

The F1 Savannah will be near you at all times as they will require constant love and attention in order to maintain their connection with you.

For families that travel a lot or if you are away from home for extended periods of time, an F1 Savannah is not the best choice for you.

The similarity between the generations comes from the constant need for attention.

The difference between the two generations is that if you are someone who spends some time away from home, an F2 Savannah can be a good fit for you as a house pet.

The social traits of the Serval are still present but an F3 Savannah is much more like a house cat in that it will play and still be actively involved in your life but will be a little more independent.

This means that he or she will want some more personal time to do whatever cats typically do when alone. You know, sunning, grooming. Cat stuff.

F4 Savannah cat – Temperament of the fourth generation is somewhat different to the F3 in that they can be easily occupied on their own or with a human companion.

F4 Savannah is still quite intelligent and playful as well. This is also the final stage before the lower generation Savannah cats.

However, this generation is a good fit with other pets and children which the F4 Savannah will view as another person to play with.

F5 Savannah cat – Commonly referred to as lower generation Savannahs, these are one of the best possible choices you can make for a house pet.

Savannah cat temperament this far down the family tree is still very playful to the point where cat toys are a good source of entertainment.

They will show loyalty to you and will enjoy the company of anyone who gives them even the slightest bit of attention.

Considered as highly adaptive, These generations of Savannahs are excellent for anyone regardless of lifestyle.

The designation of “SBT” stands for Stud Book Traditional. Essentially, a SBT Savannah is as close to a purebred Savannah as one can get.

This means that in order for a Savannah to have the SBT designation, it has to be guaranteed that the SBT cat has had just Savannahs as parents for no less that the three previous generations.

Another way to look at this is that the SBT Savannah would have to have had just Savannah parents, grandparents and great grandparents to receive the SBT designation.

As for the appearance of a SBT Savannah, they would closely resemble a F4 or F5 Savannah for size and visual look.

The International Cat Association (TICA) is the organization with which Savannah cats are registered and recognized as a breed of cat.

TICA has a letter designation system that is used to identify the many generations of Savannah mating that can be part of the genetics of a specific cat or kitten.

The TICA letters come from one of three different registries and each of these registries identifies the developmental stage of the breed.

This is the registry where the majority of Savannahs are listed.

Some Savannahs are registered here. These are the ones that are considered purebred.

These cats carry the designation ‘SBT’ with the letter ‘T’ referencing the cat as being ‘Stud Book Traditional.’

For Savannah cats, a SBT cat has purebred studs or queens in the pedigree for the last three generations.

The letter ‘A’ indicates that one parent is not a Savannah cat. This means one of several things since Savannahs are created by breeding a domestic cat to a Serval.

The kittens from this breeding pair are all registered as ‘A’ Savannahs simply because they are the product of two different breeds of cats.

In other words, the first generation kittens (F1) carry the ‘A’ designation.

Male Savannahs are not typically fertile until the fourth or fifth generation (F4, F5).

What this means is that all males bred to female Savannahs have to be non-Savannahs until an actual fertile Savannah male is born.

It doesn’t matter of the domestic cat is a purebred breed. When mated with a female Savannah, the kittens are all F1 A in the first generation.

Then There Are The ‘B’ and ‘C’ Savannahs

If two registered ‘A’ Savannahs mate, the kittens will carry the ‘B’ designation. It simply means that both parents are Savannahs and at least one grandparent is from a domestic cat breed.

When a pair of ‘B’ Savannahs mates the kittens are ‘C’ Savannahs. It essentially means that both parents and grandparents are Savannahs and at least one great-grandparent is a domestic cat breed.

Here’s where it gets really interesting. If two ‘C’ Savannahs mate, the kittens will have the ‘SBT’ designation. It means that parents, grandparents, and great-grandparents were all Savannahs.

If you do the math, you’ll understand why it is impossible to have a SBT kitten before the fourth generation. It is simply not going to happen.

Why Savannah Males Are Sterile?

There is a simple answer to this question. As Savannah males are serval until the fourth or fifth generation, they are sterile. But only to that point.

Roughly half of the F5 males are fertile and that is why F6 savannah males are typically used for breeding programs.

Remember, the further the generation moves away from the host Serval, the less and less traits continue to pass down. 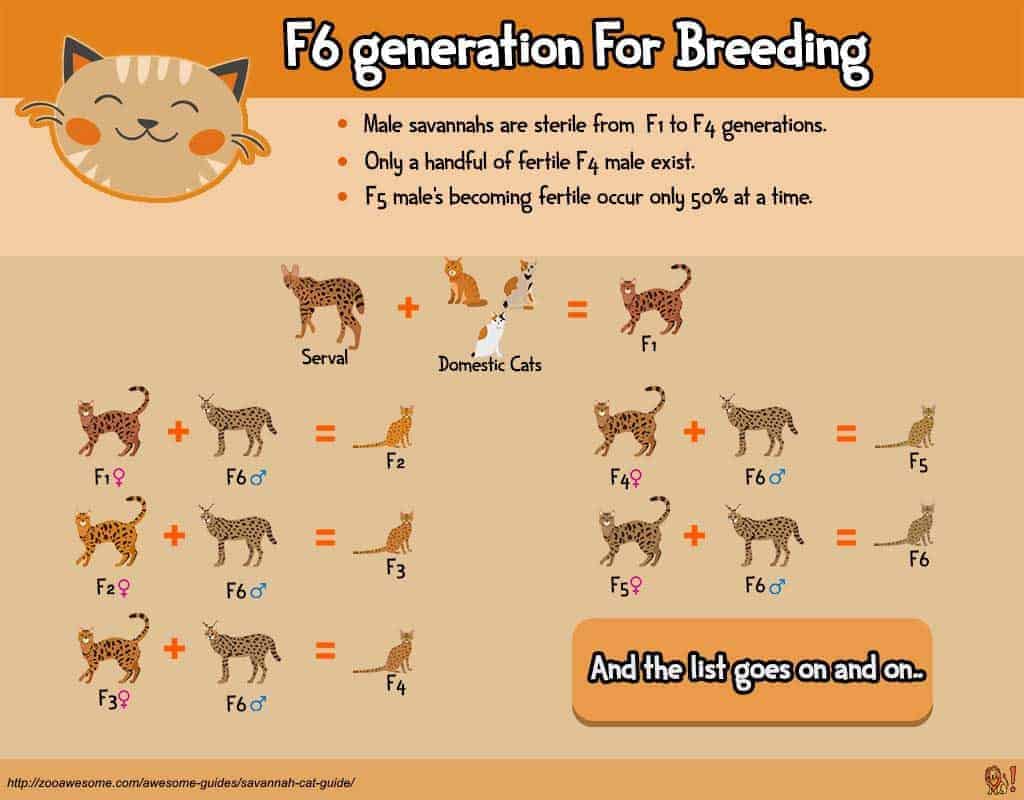 So, in conclusion, not all Savannah males are sterile. They are sterile in the first four generations (F1, F2, F3, F4) and about half of them in the fifth generation (F5) are sterile.

It is through the breeding of these Savannah males that kittens can be registered with the SBT designation.

Why Savannah Cats Are Expensive

The Serval is a wild cat. As a result, there are several difficulties related to the breeding of a wild cat to a domesticated cat.

The Serval has special dietary and health requirements that take a lot of work to achieve.

Caging requirements add to this. In fact, mating a Serval and domesticated cat is not easy at all. It may take several years in order for the breeding to be successful.

It is because of the difficulties mentioned that only a few breeders throughout the world have had any success.

The expense in purchasing a Savannah cat is directly related to the challenges in breeding and – so far – the low success rate. However, as the breed continues to grow, breeding should become somewhat easier.

• Savannah cat is the 2nd most expensive cat breed in the world.

• Savannah Islands Trouble or simply “Savannah’, Got the title in Guinness world of records for the tallest domestic cat in the world measuring 19” to the shoulder and weighing 25 lbs. unfortunately, He passed away at the age of 4 years old.

• They can make cute chirping noises similar to cheetah or serval

• Unlike any other cat breed, most savannahs actually love water and will go for a swim and play.

Pet lovers desire a four-legged companion that is loyal, curious, social, intelligent, outgoing, affectionate and adventurous. All of these words have been used to describe the Savannah cat.

If you are seeking a pet that is a bit on the unusual side, highly active and totally engaged in whatever you are doing, you don’t need a puppy.

You can do just as well with a Savannah cat. That’s because they are all of these things bundled up into a long, lean and amazing-looking package.

For a pet that is easily adaptable to its surroundings, is pet and kid-friendly, sheds moderately, and eats cat food like your tabby would, then you should seriously consider a Savannah cat.

The lower generation Savannahs makes the best pets as they are closer in traits to the domesticated parent part of their DNA.

The only major factor to keep in mind is the cost to get one. As Savannahs are still a relatively new breed that presents challenges in the breeding cycle, they are expensive to purchase.

Recognized by TICA as a registered breed, your Savannah cat will not starve for attention as it will attract more and more as long as your take your companion with you on a leash whenever you go away from home.

The intelligence of a Savannah cat will make it a welcome part of your life as it learns and responds to your daily activities – often pushing his or her way into the center of the action.

These are healthy cats that can live slightly longer than your average domesticated cat and give you years of love and friendship along the way.

For a unique family pet, that will give as much love as it gets, consider getting a Savannah cat.