If you are planning to buy a dog, you might be confused about Staffordshire Terrier Vs Pitbull.

You might be thinking of which breed will suit your family and lifestyle more. Both breeds have their own advantages and disadvantages.

In this article, I will try to highlight the differences between Staffordshire terrier and pit bull so you can get a clear idea of which breed will suit your needs best.

Is a Staffordshire Bull Terrier a Pitbull?

A Staffordshire Bull Terrier is part of the same family as the American Pit Bull Terrier, and it can be difficult to differentiate between these two breeds.

They both share similar characteristics, and some dogs may appear more aggressive than others. While they are both considered terriers, they do have differences that help set them apart from one another.

How to tell a staffy from a pitbull

The Staffordshire Terrier also known as Staffie is a medium-sized, sturdy, and muscular dog that has been bred for the past 200 years to protect people from other dogs.

It has a wide head, small eyes and ears, a space between its eyes, and a large powerful jaw.

The Pitbull also known as American Pit Bull Terrier or simply APBT is also a medium-sized breed of dog that can vary in size from 30 to 70 pounds for females and 50 to 80 pounds for males.

Dog Breeds That Get Along With Huskies

What are the 5 Key Differences Between Staffordshire Bull Terriers and Pitbulls? 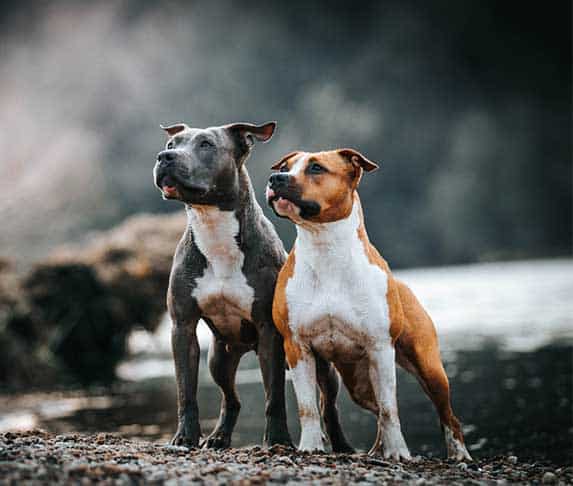 There are 5 key differences to differentiate Staffordshire Bull Terriers from Pitbulls. These are:

There’s no getting around this one. Staffordshire Bull Terriers are significantly smaller than Pitbulls.

The typical weight for a Staffy is 24 and 38 pounds depending on gender, while the average weight of a Pitbull can be 30 and 60.

The Staffordshire Bull Terrier is a muscular and stocky dog breed with a broad chest and short, powerful legs.

The Pitbull, on the other hand, is a medium to large-sized dog breed that is slightly longer than it is tall. It has a muscular build with a wide chest and strong, powerful legs.

The head of a pitbull is wide, short, and broad. Its face is muscular, with an underbite and flat nose.

Staffordshire Bull Terriers is completely different. They have narrow heads and they have an obvious stop that leaves their heads appearing longer than they actually are.

Staffies also have eyes that are slightly nearer together than a Pitbull, which gives them a kinder expression.

Staffordshire Bull Terriers have a short, smooth coat that is slightly coarse and may be blue, black colored, or brindle.

Pitbulls, on the other hand, tend to have a short, smooth coat that is fine and may be white, black, or brindle.

One of the most common misconceptions about these two breeds is that they are essentially different varieties of the same breed.

The confusion arises from the fact that Staffordshires and American Pitbulls share many similarities.

For example, they’ve been used for the same purposes, including as hunting dogs or guard dogs.

It’s also true that there is some genetic relation between them; however, the two breeds do exhibit some important differences.