What Is The Best Age To Neuter A Kitten?

A kitten in your family is going to eventually grown into an adult cat. That adult cat can produce a lot of their own kittens. Do you know the best age to neuter a kitten? […] 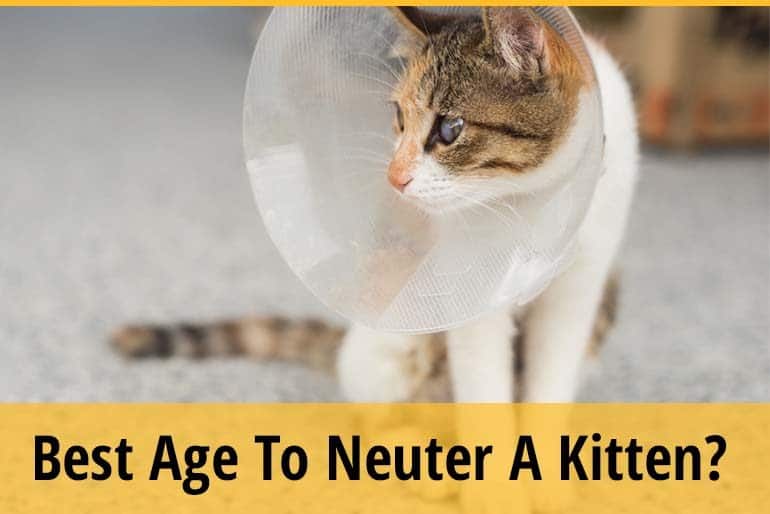 A kitten in your family is going to eventually grown into an adult cat. That adult cat can produce a lot of their own kittens. Do you know the best age to neuter a kitten? That depends on a number of factors but generally speaking once the kitten has reached eight weeks of age or weighs no less than two pounds, it should be neutered.

Waiting too long after that age could present a problem as the males produce more hormones between eight weeks and several months of age.

A Little More About How Kittens Grow

Kittens develop rather quickly and may even reach sexual maturity by the time they reach five months of age.

Typically a male cat can sire his first litter at that age. For female cats the situation is quite different. The onset of the first estrus cycle, weight gain, environment and temperature all play into the timing for female cats.

When Should You Get A Cat Neutered?

It is not as if there is a hidden ticking time bomb buried within your kitten that will go off if you don’t get him neutered at the precise time that is recommended.

Your vet will be able to provide some guidance but essentially, when he reaches eight weeks of age, he has developed enough to have the procedure and not end up with any complications.

What Is The Procedure?

The procedure is called orchidectomy. What it describes is when the male cat’s testicles are surgically removed from the scrotum.

Essentially what you are doing when you neuter your male cat is you are sterilizing him. He will not be able to sire a litter of little kittens. When a female is spayed, she is unable to get pregnant and have any litters.

The recovery time for a male kitten is not very long. The incision should heal completely within a couple of weeks.

He may have to wear a cone to prevent him from chewing or pulling at the stitches at the incision site. The procedure is routine and safe. Plus, when you spay or neuter your kittens, you are reducing the over population of unwanted cats.

Why Should You Neuter A Male Kitten?

Well, we’ve already touched on it briefly. An intact male cat can sire numerous kittens in his lifetime. There already is a cat overpopulation problem and but neutering your kitten when he reaches the appropriate age, you are doing your part to halt the additional numbers of kittens being born just from your cat.

One more thing about the overpopulation of cats. There are several communicable diseases that can be spread from untreated fighting wounds of feral cats protecting territory or whatever.

An intact male cat will contribute to the volume of strays that end up in shelters and often result in being put to sleep simply because there are too many of them around.

When you neuter or spay your kitten, you are doing a responsible thing as a cat owner .

Cat Pregnancy Stages You Should Know About

Best Reasons For Neutering Your Kitten

Once your male kitten has been ‘fixed’ there will be some better behavior traits present. Intact males are territorial and can end up in violent conflicts with other – sometimes diseased – cats. All it takes in a bite or a scratch from a sick cat to transmit disease to your kitten.

When a male kitten has been neutered, the speed in which he produces male hormones will slow down between the ages of eight weeks and five months. This also reduces his need to roam and engage in fights with other cats.

Intact male cats will spray a lot. It is a form of communication between cats and the chemicals found in the urine of intact male cats produces a foul odor that can soil anything it comes in contact with.

Neutered kittens may still spray but their desire to do so is greatly reduced as is the strength of the scent that accompanies it. They eventually find there is no need to leave their mark for other cats as they are not competing with intact cats.

Whether or not your male kitten is going to become obese following neutering involved several different factors. His activity level, his metabolism and his diet all have a direct impact on his weight.

To say that your cat is going to get fat if you neuter him is wrong. In fact, there is no connection between neutering and obesity. He may not be quite as active as once before, but you can remedy this with a change in diet and by introducing playtime that gets your kitten moving.

Not Sure If You Can Afford To Spay Or Neuter?

There are several agencies where you can access what is being called low-cost spay and neuter programs. We bring this up to point out that cost should not be the determining factor as to whether or not you will have your kitten spayed or neutered.

Check with your local veterinarian, too. Some will offer discounts or even a payment plan that can ease the pressure on you financially. You owe it to your kitten to give him a long and healthy life and one way to ensure that is to have him neutered.

Cat overpopulation is a huge problem. Because cats can reproduce so early in their lives and can reproduce often, an intact male or female can contribute a fair number of kittens. One way to prevent this from happening which is safe and a routine procedure is spaying or neutering .

A kitten that has reached either eight weeks of age or weighs no less than two pounds is at the right stage in their lives to have the procedure.

When you spay or neuter a kitten. You are sterilizing it to where the male cannot sire kittens or the female cannot get pregnant.

Even if your kitten grows to be a strictly indoor cat, neutering him is good for both of you. He won’t likely spray or get into territorial fights with other cats and he won’t feel the need to roam and get into other kinds of trouble. He may be a lot mellower as a result.

Plus, the cost of spaying or neutering should not be a reason to keep you kitten intact. By accessing a low-cost alternative program you are still doing something good for your kitten and yourself.

By stopping the possibility of unwanted, stray and feral cats being produced with your kitten once it sexually matures, you put a dent into the overpopulation of cats.