Cat Pregnancy Stages You Should Know About

You might not know much about cat pregnancy or how to make things easier for your expecting mom but it certainly helps when you know what to expect. For example, cats will most often navigate […] 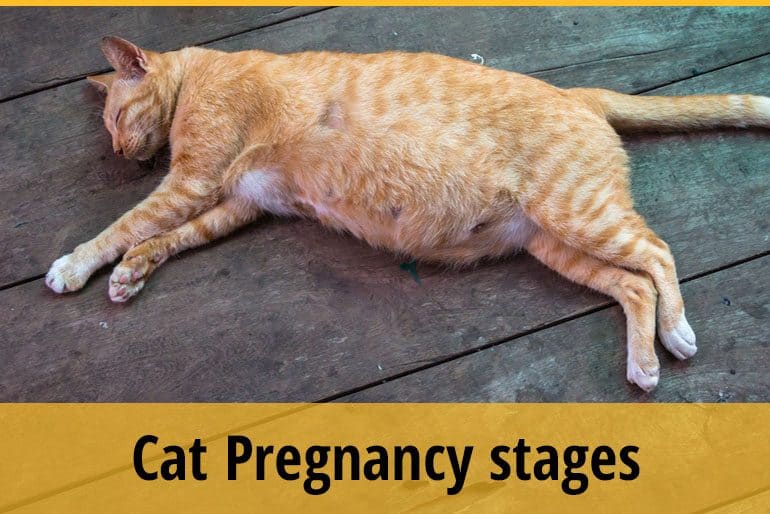 You might not know much about cat pregnancy or how to make things easier for your expecting mom but it certainly helps when you know what to expect. For example, cats will most often navigate pregnancy with little trouble but providing a healthy diet is one way in which you can have some positive input.

On the other hand, pregnant cats tend to look and act a lot differently during these stages which is often a cause of concern for owners. With this in mind, it’s within your interests to better understand this behaviour and have an idea whether your pregnant cat is behaving strangely or not.

Now, let’s look at what you should know about the five stages of cat pregnancy:

5 Stages of Cat Pregnancy that You Should Know About

Believe it or not, cats as young as five months old can breed their own little of kittens. What’s more, feline cats are highly fertile and depending on how many males are involved, they can breed a litter from more than one father at any one time. As for time-frame, the gestation period is approximately ten weeks which means that the fetal development moves incredibly quick for cats.

Either way, here are the five main stages of cat pregnancy:

It can take up to ten days from the time of mating for male sperm to locate and fertilize the eggs. After two more weeks, kittens will begin to develop in the mothers’ belly.

Visible signs of pregnancy appear such as weight gain and loss of appetite. Hormones and organs also begin to develop and the nipples of a pregnant mother will usually turn pink during this time. However, many owners fail to recognize these developments and assume other reasons for such changes.

3. Cat Pregnancy is in Full-Flow

When you enter the third of these cat pregnancy stages, your expectant mother will display an even more significant weight gain and a belly or bump in the exact spot where the kittens are developing. “Morning sickness” can occur in stage three and your expectant mother may start to vomit from time to time.

Just so you know, it’s important not to pick her up during this stage as any unexpected movement can potentially disrupt the pregnancy or even damage one of the kittens. You might also notice that she begins to eat a lot more and this extra food/nutrition will be vital for the development of the kittens.

Owners will sometimes take their expectant mother for an exam during this stage and it’s often possible for vets to detect the number of kittens.

What Is The Best Age To Neuter A Kitten?

Approximately one week before the expected birth date, the labor stage begins. During this short period, pregnant cats will look for soft and safe places to “nest” and potentially lose their appetite temporarily.

Pregnant cats can become anxious and nervous during the final stage of cat pregnancy. At this point, you should be able to see the kittens moving around beneath the surface and pregnant cats do a lot of grooming in this stage. Closer to the birth date, pregnant cats also start to seek out soft and quiet places in which to nest verkkosivu täällä. For this reason, you can make a nice bed with soft blankets but whether she wants to use this bed is another story.

As soon as delivery begins, pregnant cats will often purr loudly and you will even see the contractions as they happen. If you notice white discharge from the nipples, this also means that birth is imminent.

After one hour of labor, the first kitten will often arrive and then a new kitten every other 15/20 minutes. In case you might be wondering, your new mother will then clean the litter and also eat the placentas.

While most cats are somewhat reluctant to change diet, you should ensure your expectant mother is eating a high quality kitten food during pregnancy. Pregnant cats will usually eat smaller portions during this time, but they also tend to eat more often so try to remain patient with the process.

Aside from the above, you can rest assured that cats are able to deliver their litter without assistance.

That being said, it’s hard not to worry and you may feel apprehensive during this time. As if that’s not enough, your expectant mother might be following your around or meowing more than usual which does little more than cause concern for most owners.

However, keep in mind that this is normal for pregnant cats and if you really do believe this to be unusual behavior, it’s best to contact your local vet.