You may be wondering if your leopard geckos would benefit from having another one around.

Is it okay to keep them together?

Are there risks involved?

What factors should you consider before making this decision?

This article will help answer these questions so you know whether is it safe and healthy to keep multiple Leopard Geckos together in the same enclosure!

What is leopard gecko cohabitation?

Cohabitation is defined as the act of living together. Leopard geckos are solitary animals and therefore do not like to live with others of their own kind (but they may be housed with other reptiles).

They have been known to have a hierarchy where one leopard gecko is dominant over others, while the others submit to that dominance.

They can also be territorial, meaning they will defend a certain area from intruders such as other leopard geckos or even humans who get too close for comfort!

Some leopard geckos will fight each other for territory or food.

However, most are not territorial and do not need much space at all for themselves unless it’s a mating season when males will fight off anyone trying to mate with their “female friend.”

Can leopard geckos be housed together?

It’s not uncommon for leopard geckos to be housed together, but it’s important to take extra care when doing so.

They can cohabitate in groups of two or more if they are juveniles, but adults prefer living on their own.

The general rule of thumb is that you should only house one adult per enclosure as they tend to get territorial with each other as they age.

If you do decide to keep leopard geckos together, make sure that there is enough space within the enclosure so that they don’t feel overcrowded or stressed out by one another.

It may also help if your enclosures are on different levels – this allows them some chance at privacy and personal space within the same tank!

Yes, two female leopard geckos can be housed together in captivity.

However, you may need to intervene if there is any hint of aggression between them. 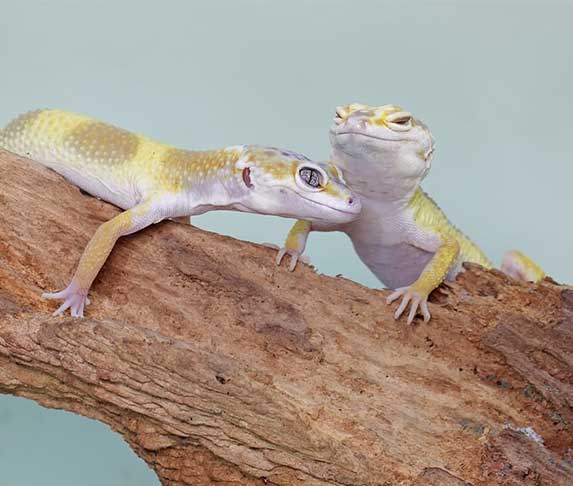 Yes, two male leopard geckos can live together. However, they are constantly fighting.

They will continue to fight even if they are not in the same enclosure.

It is best to keep them separated at all times because it is too stressful for them to be around each other if they don’t want to be.

The only exception is if you want a breeding pair of geckos and then it would be okay for them to share a tank together as long as there is plenty of space for both lizards so that there aren’t any territorial problems between them when they get older or larger than their tank size allows now!

Can a male and female leopard geckos live together?

It is possible to house male and female Leopard Geckos together, but there are some important considerations to be made.

The first thing you should know is that male and female Leopard Geckos are not compatible.

This means that they cannot live together in the same tank or enclosure.

They will fight until one of them dies or is removed from the enclosure.

If you want to keep a male and female Leopard Gecko together, then you will need to separate them into different enclosures.

Female Leopard Geckos tend to be more aggressive than males, so it may be easier for males to live together than females.

However, this isn’t always the case as some male Leopard Geckos can become very aggressive as well.