The eyes of crocodiles are very similar to those of humans and other mammals.

They have a lens, cornea, iris, and retina. Crocodiles have binocular vision, meaning they can see in two directions at once. But how good are they?

Do crocodiles have good eyesight?

Crocodiles can see just fine. They may not have the best eyesight in the animal kingdom, but they do have a few tricks up their sleeves to help them navigate their environment and find food.

Crocodiles’ eyes are set on the sides of their heads, giving them a nearly full panoramic view of their surroundings.

But this type of vision comes with a trade-off: It means that crocs can’t focus on objects directly in front of them — or even directly behind them — without turning their entire bodies first.

This means that crocodiles are unable to see what’s going on around them while they’re cruising through the water with only one eye open at a time.

So instead, they rely on smell and hearing as well as touch to find prey and avoid predators.

Crocodiles also have an excellent sense of smell that helps them track down prey from a distance, including when it’s buried under sand or mud.

Their nostrils are located at the tip of their snout, so they can breathe “underwater” for short periods of time by keeping one nostril closed off while hunting for food; this way, they don’t need to surface every time they want to breathe like other marines animals.

Crocodiles have no eyelids, so they can’t blink.

The transparent film membrane allows a crocodile to keep its eyes open underwater, without getting any dirt into its actual eye.

This means that they can see underwater perfectly well.

How can crocodiles see underwater? 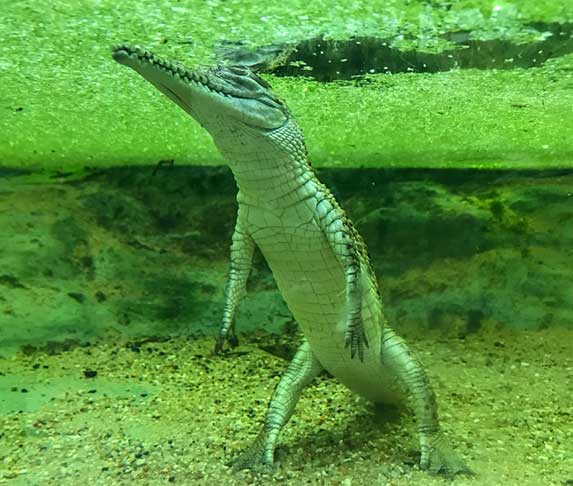 Crocodiles are able to see well even in murky water because they have an extra eyelid called a nictitating membrane.

This membrane covers the eyeball when they submerge underwater and then blinks back up when they surface again.

Can crocodiles see in the dark?

They can see at night because of tiny mirrored receptors in the back of their eyes called “tapetum lucidum”.

This gives them the ability to detect light from very small distances, which allows them to hunt at night.

The tapetum lucidum works like a mirror; it reflects incoming light, rather than absorbing it as our retinas do.

When light hits the retina, it bounces back out through another part of the eye (the pupil) so we don’t get blinded by our own reflection in bright lights or water.

This ability is helpful for crocodiles because they spend most of their time underwater where it’s dark anyway!

What is special about crocodile eyes? (incredible facts) 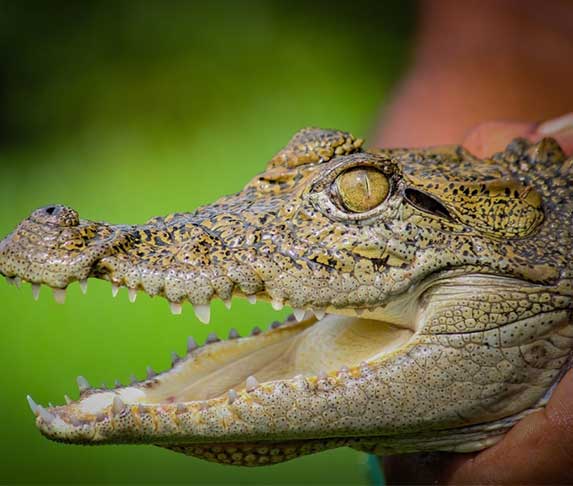 1. They can see underwater which is why they are called “alligators” as well as “crocodiles”.

Crocodiles are more likely to be seen on land than alligators because they prefer warmer climates with more water bodies like lakes, rivers, and ponds.

On land, their eyes remain half-open due to their lack of eyelids which enables them to keep an eye on any possible predators lurking around them.

2. Crocodiles have horizontal slit-shaped pupils, which gives them a wide range of vision.

3. Crocodiles have nictitating membranes (third eyelids) that cover their eyes when they attack prey or when they dive underwater, protecting them from dirt and debris.

4. Crocodiles can see color, but they have poor color discrimination and cannot see reds, oranges, or yellows very well.

They also have difficulty seeing objects in bright light as well as distinguishing detail at a distance.

5. Crocodiles have the most powerful bite on earth.

6. They can hold their breath for up to an hour underwater without any trouble.

7. They can stay submerged for up to two weeks without having to come up for air!

8. Crocodiles have excellent night vision and can see up to 50 feet away in low light conditions.

Crocodiles are born to be wild and not just normal. You cannot enjoy any creature of the earth better than you will enjoy the crocodiles.

The crocodile’s eyes are amazing and looking at the creature gives you a chill.

These facts about crocodile eyes we have here can make you think again about how fascinating they are.