If you are a Malamute owner, then you might be wondering if it is normal for your dog to howl or not.

The answer is yes and no; while dogs will naturally howl at the moon or at other dogs, others will not do so without proper training and encouragement from their owners.

Let’s explore why some Malamutes are prone to howl, and what makes them do so in the first place!

There are many reasons why malamutes howl.

You may think that it’s because they want to be heard, or because they’re hungry, but the real reason is much more complicated than that.

Malamutes have a strong pack mentality and are extremely territorial.

They also have a voice of their own—and are quite vocal!

So what causes this behavior? We’ll go over several common reasons below:

Malamutes are pack animals. When they feel threatened or anxious, it’s natural for them to want to seek comfort from other members of their breed who can provide support and reassurance through howling.

A howl is one way a dog lets other dogs know that they are in the area and that they should stay away.

They will do this when they are on walks and see another dog nearby.

When you take your malamute outside, listen closely for any howling.

If you hear your neighbor’s dog howling back at yours, chances are it is trying to tell him or her not to come into their territory!

To seek your attention

A howl is a cry for attention. They may be saying they need to go outside, or they want to play with you.

If your dog is howling in the middle of the night and won’t stop, it could be because he’s bored and needs something to do!

Sometimes you may notice your Malamute howling when they’re anxious.

It’s not just a form of communication, but a way for them to express themselves and let their feelings out.

If your dog is howling more than usual, then it’s likely that they are experiencing some kind of anxiety or stress in its life.

When triggered by sound

Malamutes are vocal dogs, and they’re known for their howling.

When you hear a Malamute howling it is usually because they are happy and content, or using it to communicate with other dogs.

It’s important to know that not all dog breeds howl, but if your dog does have this trait then it can be very comforting to you as their owner.

Do Malamutes Howl When Happy? 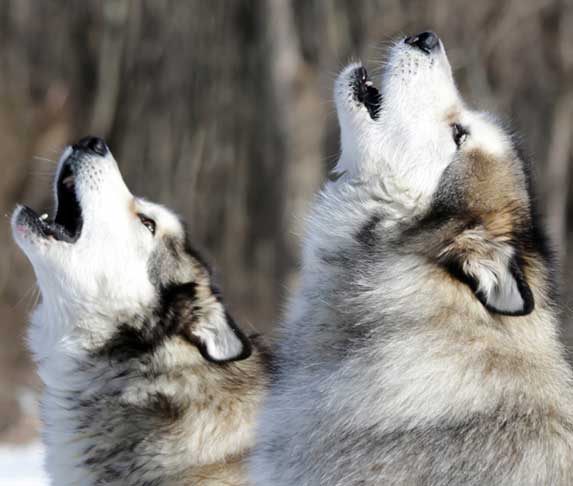 Yes! And they do it when they’re happy.

When your malamute sees you, hears your voice, or feels the warmth of your touch, he is likely to howl in happiness.

Now that you know why Malamutes howl, it’s time to start training your pet.

It is important that your dog knows when and where to howl, as well as when not to do so.

If you don’t want them to do something they are doing anyway, then use positive reinforcement techniques such as a reward or praise when they have obeyed orders!