A Saint Bernard is an admirable dog breed along with the club of sturdy, affectionate, and loyal hounds of which pet lovers cannot get enough.

But Saint Bernards are not the only breeds exuding intelligence and strength.

In the next second, we will dwell on their characteristics and adorable aspects that are less known to most people.

We will also examine why we claim they are spitting images of a Saint Bernard and why you should admire them, too, like other dog lovers out there.

What It is Like to Be a Saint Bernard

Dog lovers tag them as gentle giants because they are affectionate though they weigh 120 to 280 pounds, towering at about 30 inches tall.

Also, they are known for rescuing and saving injured travelers in the Swiss Alps.

They are likely to survive the cold due to their furry coats that tolerate low temperatures.

Despite their high cold tolerance, they get exhausted fast after too much sun exposure or vigorous exercise.

It explains why their energy levels are commonly low.

They mature at a slow pace, which may be why they have a high potential for playfulness.

However, they drool a lot, and their breeds are short-lived, with a lifespan of only 8 to 10 years.

When pets are too adorable but are also limited in number, it gets impossible to have one sometimes.

But we should not fret because we can investigate their lookalikes.

In this list, we consider other dog breeds and their similarities with Saint Bernards.

Be ready to marvel at their Saint Bernard-big and remarkable personalities. 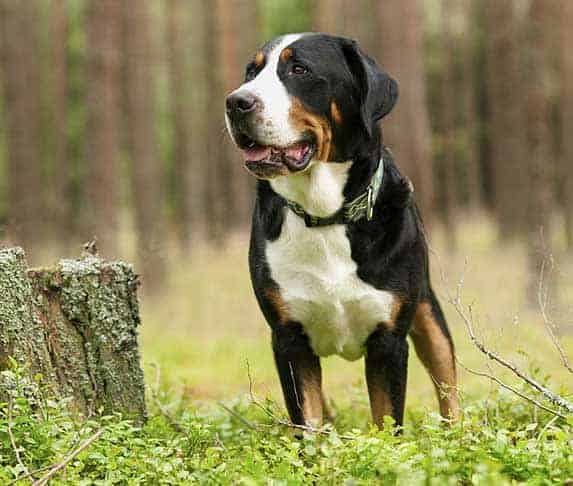 Greater Swiss mountain dogs are some of the draft and drover breeds belonging to the working group.

Like Saint Bernards, they are sturdy and robust, and they have tri-colored body features.

Their silky black coat with brown and white markings makes their features look bold and intimidating, while their dark brown almond eyes exude a warm expression.

As they are born as draft dogs or sled-pulling dogs, Greater swiss mountain dogs are fast, alert, and reliable hounds.

Their average life expectancy is eight up to 11 years. 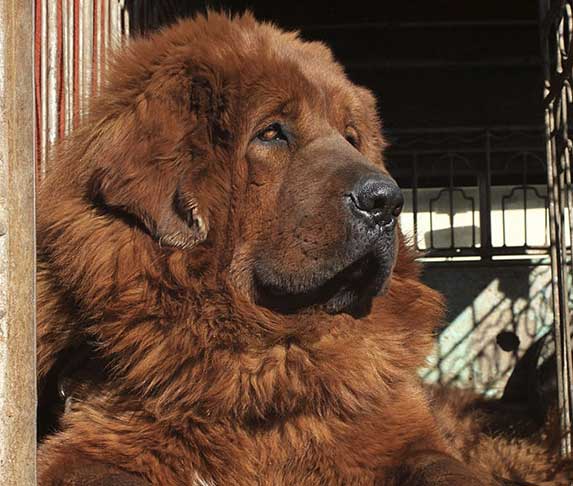 Unlike Saint Bernards, Tibetan Mastiff’s wooly coats do not shed.

Tibetan Mastiffs fare and live a little longer than Saint Bernards, with a lifespan of 10 to 12 years.

They have a large build weighing approximately 70 to 150 lbs.

Their slightly slanted almond eyes are sweet and adorable.

Its broad head and curled tail are its distinguishing features. 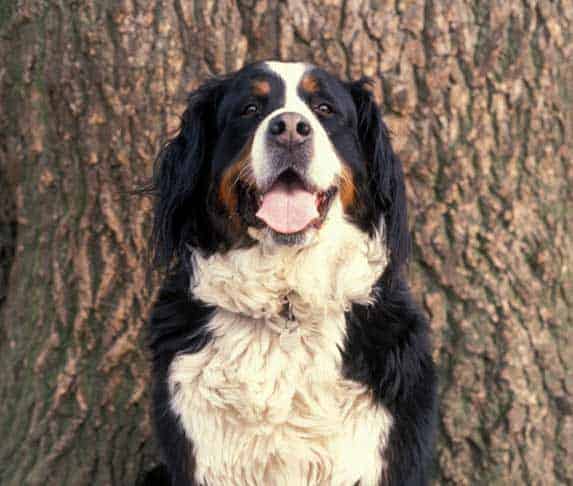 Although they are enormous, young children can be safe around Bernese Mountain Dogs.

You can often find Bernese Mountain Dogs in the pastures of Switzerland, flaunting their inherent strength.

Weighing 70 to 115 pounds and measuring up to 28 inches tall, they have a multi-colored, long, and silky coat.

They can form attachments with humans for up to 10 years and are good-natured hound breeds.

6 Dog Breeds That Can Live Outside 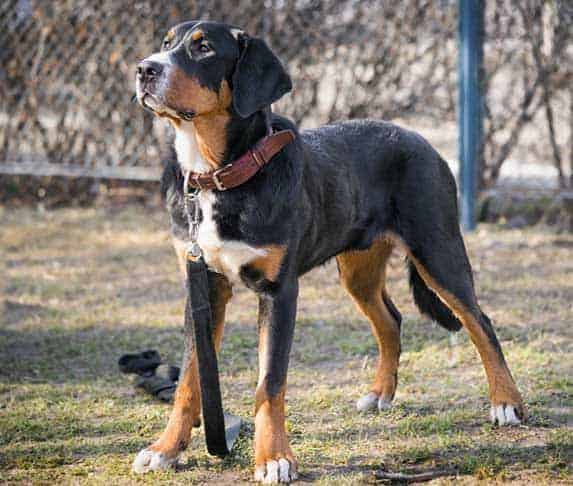 Appenzeller Sennenhunds are among the top breed choices for search and rescue operations, despite weighing only about 70 pounds.

It is what makes them a mirror image of Saint Bernards besides their wooly coat and colorful markings.

Its typical body markings are black, brown, and white.

It makes them relatively more minor than Saint Bernards.

Their height ranges only from 19 to 22 inches.

But, thanks to their agility, powerful sense of smell, and loyalty, they make saving lives more convenient.

They can serve as watchdogs or farm dogs or accompany their pet owners for 12 to 15 years. 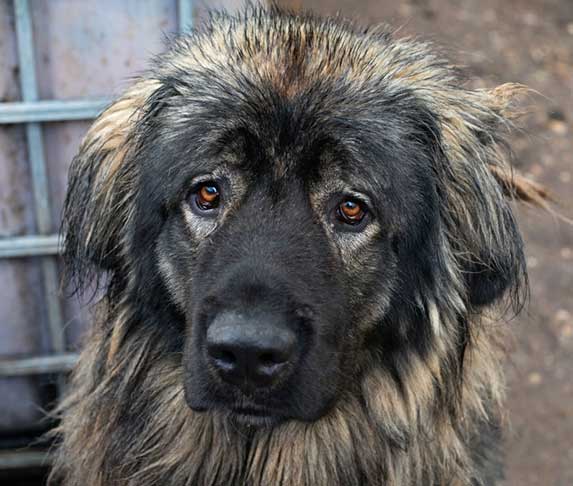 Most Caucasian Shepherds have fearless temperaments as they weigh 99 to 170 pounds.

Their distinguishing characteristics are their body markings.

They come in different colors. There is black, brown, grey, rust, and more.

Also known as the Caucasian Ovcharkas, they are almost the same height as Saint Bernards, at 23 to 30 inches tall.

Commonly, dogs get prone to illness.

However, the majority of Caucasian Shepherds tend to be free from health complications. 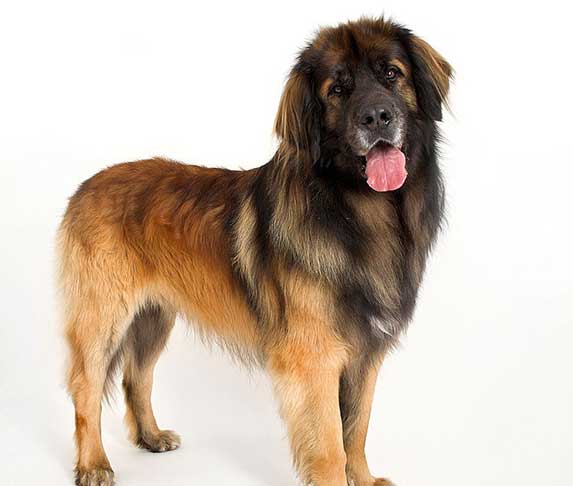 Leonbergers are slightly Saint Bernards, in a way.

They are a Saint Bernard, Newfoundland, Pyrenean mountain dog mix with distinct and notable features.

They can grow to as high as 30 inches tall and 170 pounds heavy.

They accompany rescue guards in operations, tracking, and herding due to their reliable, sensitive sense of smell.

However, most Leonbergers could only live up to 9 years. 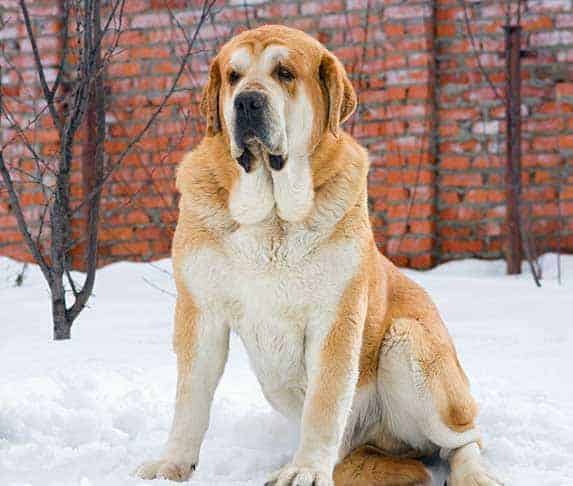 At first glance, we can mistake a Spanish mastiff for a Saint Bernard.

They have an elegant stance that looks as though they are ready to conquer any adversary.

Spanish mastiffs are so tall at 35 inches and sturdy at approximately 200 pounds.

Its rust, white, and black markings are common in the majority of the working dog breeds.

We can expect the life expectancy of Spanish mastiffs to be at 10 to 12 years.

Saint Bernards are one of the most well-loved dog breeds by pet champions in the world.

Despite their big builds, they are gentle and sweet.

Hence, we love to see more of it in the community of hounds.

Luckily, we have a handful of them that are equally graceful, gentle, and reliable.

Saint Bernards are fantastic, but they are not the only ones.