The big question here is, “Are Huskies close to wolves?” In this article, we’ll see just how their ancestors make up the different breeds of huskies that exist today.

It’s important to remember that there are probably many different families of dogs around the world.

However, it’s really interesting that if you look at a wolf and a husky, you can tell they’re related but you can’t really pinpoint the differences.

Are huskies related to wolves?

Huskies are not wolves, but they do share a common ancestor.

They are part of the dog family, Canidae, which includes wolves and other canines like foxes and coyotes.

Huskies are closely related to wolves and have similar features as well as behaviors.

Huskies have thick coats that come in a variety of colors depending on their breed and can be long or short in length.

Huskies also have bushy tails that they use to keep themselves warm when it’s cold outside. Huskies have pointed ears, almond-shaped eyes, and strong jaws with teeth that meet in a scissor-like bite.

Like wolves, huskies are pack animals who live in groups called “packs” or “kits.” Huskies are known for having a friendly temperament and make great companions for people who live alone or want an active pet.

5 Reasons Why Belgian Malinois Bite So Much

What are the differences between a wolf and a Siberian husky? 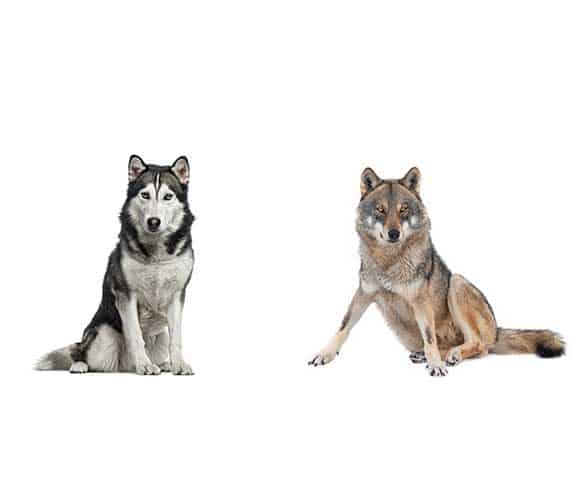 Wolves and Siberian huskies have some similarities, but there are also many differences.

The two animals have similar fur, eyes, and size.

Both have a lifespan of about 12 years if they are healthy.

wolves are much more aggressive than Siberian huskies and they can’t be domesticated as easily as huskies.

Wolves and huskies both have long, thick coats that protect them from the elements.

Wolves have gray fur with black markings while Siberian huskies’ fur color comes in a lot of varieties.

Both animals shed their coats twice a year but only a small amount of hair comes out each time.

Both wolves and Siberian huskies have amber-colored eyes that help them see in low light conditions so they can hunt at night or dawn/dusk when their prey is most active.

Huskies typically have one blue eye and one brown eye while wolves only have yellow eyes.

What Are The Similarities Between Huskies And Wolves?

Huskies and wolves are both members of the Canidae family, which is a large group of carnivores that includes dogs, foxes, and jackals.

They also belong to the subfamily Caninae, which is a branch within the Canidae family.

Both huskies and wolves are part of the same family tree. They’re all members of the Canidae family and share common ancestors.

Both huskies and wolves are meat-eaters who hunt small mammals such as rabbits, squirrels, or rodents — except when they’re domesticated pets!

Undercoat that insulates them

Both huskies and wolves have an undercoat that insulates their bodies against extreme temperatures by trapping air between layers of fur.

We hope we’ve answered your question, “Are Huskies closely related to wolves?” in more ways than one.

What was once a myth is now a fact that’s being touted across the Internet.

However you want to look at it, Huskies and wolves are closely related, but they’re not the same.

Dog lovers can rest easy knowing that their Siberian Huskie will still be considered a dog after this revelation.