Dogs chase small creatures in parks and back gardens. It is what they do.

But you have to be mindful of how they interact with small critters especially iguanas, dead or alive.

Why would dogs come close to iguanas and are they poisonous?

There is the common reason being that dogs are predatory animals and will chase small creatures that run away from them; Iguanas included.

Descended from wolves they have that hunting instinct to sink their teeth into something small and squishy. But it is not easy catching a live iguana.

Dead iguanas are a problem and that is why this article is necessary.

In 2010, there was a clear problem of dogs ingesting dead iguanas and getting paralyzed.

Veterinarians who treated them then had to sound the warning to pet owners.

There was a cold snap and iguanas were frozen dead in trees and fell to the ground.

Dogs being curious get close, inspect and ingest thinking it is a chew toy.

And that was where the problem started.

What Happens When Dogs Ingest Iguanas? 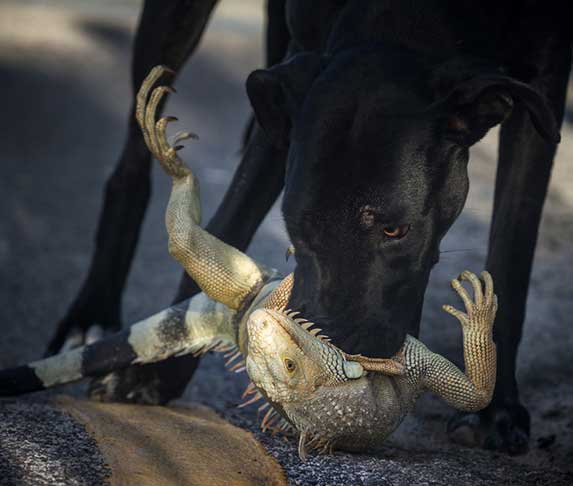 1. Dead Iguanas are carriers of the bacteria for Botulism, once ingested dogs can suffer from the symptoms that can manifest within a day.

The symptoms are few, but it is mainly paralysis that starts from the tail and back legs then moves to the front legs.

This can disable the diaphragm and esophagus.

2. Once it affects these areas it can stop breathing and cause pneumonia.

What botulism does is cut off communication between the nerves and muscles, which is painless but dogs will not be able to walk or stand.

3. Treatment can be expensive; if the paralysis does make the dogs incapable of breathing on their own, they would have to be intubated to be kept alive.

And when owners cannot afford that treatment, they have had to euthanize their pets rather than see them suffer.

The worst of the symptoms can be treated by veterinarians and improvements can be seen within a week.

But left untreated without the intervention of veterinarians dogs have died.

4. Apart from botulism most lizards and reptiles are carriers of other bacteria and can emit poisons that can affect your pet in various ways.

Iguanas while not emitting any poisons or venoms can have worms or flukes in their internal organs that can be transmitted to your pet once ingested.

So ingestion of iguanas is poisonous to dogs.

Why It Is A Problem?

This problem was not widespread enough to catch anyone’s attention till a flood of cases in Florida in 2010.

It was not on any veterinarians’ radar till they investigated the common denominators of iguana carcass ingestion and the environmental causes.

The symptoms of the paralysis were too similar to other causes like stroke.

Some veterinarians were clueless as they had not come across any cases of botulism in dogs.

It is a rare occurrence but it can happen.

Can You Insure Your Dog Against Theft? (Pets Insurance Facts)

Signs To Look Out For:

What To Do If Your Pet Eats An Iguana? 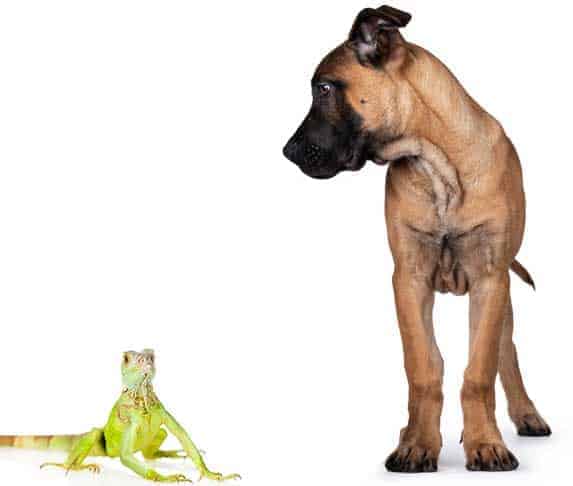 Because of the variety of toxins and how severe symptoms can get you should contact a veterinarian practice once the first symptom manifests.

They can talk you through what could happen and if you need to bring your pet in.

How To Prevent This From Happening?

1. If you have your pooch outdoors, be careful of what they do and what they chase after.

Live iguanas can be bad for your dogs too as they can scratch up your dog with their claws and their tails in their defense.

Keep your dog on a leash to control them; if not on a leash make sure you can call and distract your dog with commands and treats if necessary.

2. You can control your own backyard to make sure it is safe for your dog.

Check for any dead creatures, reptiles, and iguanas that would be around; dispose of them properly to ensure your dog cannot get to them.

If the creature was in a water body you know your dog might use, it would be best to drain it.

3. Research the common lizards in your area and if they are poisonous or not.

Find out if there are iguanas local to your neighborhood so you know how vigilant you have to be outdoors for your pet.

4. Teach your pets to not hunt lizards or small critters as they could graduate from some non-toxic ones to iguanas and other reptiles and frogs that can get them very sick.

With this information, you should be able to protect your dog from bad interactions with reptiles. Stay vigilant for your dog.