Most people fear snakes, with good reason, but with representation in media and literature snakes are painted to all be poisonous and dangerous.

But this is not true.

There is a species of snakes called King snakes that are nonvenomous and sometimes kept as pets by humans.

They can be domesticated enough to be petted but are King Snakes safe with your dogs; as pets or in the wild?

1. Why we are bothered about King Snakes is they are the most common snakes in North America but can be found all over the world.

They are a unique set of snakes because they are one of the few snakes that eat other snakes, a trait shared by King Cobra.

2. They are nonvenomous and kill by constriction.

They are Colubrid snakes which are the scientific family of nonvenomous snakes and of the genus Lampropeltis which in English translates to “shiny shield” depicting the glossy scales they all have.

3. Most King Snakes have vibrant patterns of bands and speckles and vividly contrasting colors which is a defense mechanism to be less visible to predators like foxes, birds of prey, coyotes, and other snakes.

4. They vary in length from two feet to six feet depending on the species.

They are mostly docile when domesticated and feed only a few times a month and that may be one of the reasons why they are good as pets.

5. Their habitat varies from grasslands, forests, suburbia to rocky areas and deserts.

They are also present in swamps but are terrestrial still.

They are mostly nocturnal but in hot summer months they may make an appearance in the day but mostly stay hidden under rocks or under brushes.

6. The most important attribute of King Snakes is their ability to eat other snakes.

They are immune to pit viper venom so their diet of other venomous snakes is a service to our environment, like pest control.

Their presence in the wild can restrict the population of venomous snakes like rattlesnakes, copperheads, and cottonmouths. 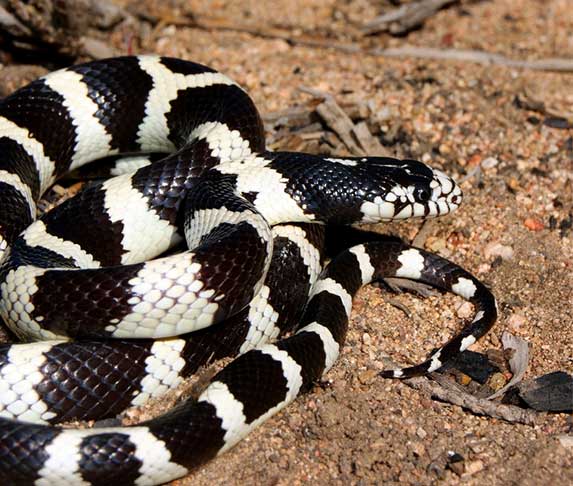 they are black with white or yellow chain-like bands that look like chains but can sometimes appear to be jet black.

they are black or brown in color with specks of yellow or white.

They have black scales with white bands or white stripes.

They are red with yellow and black bands that encircle the body.

They are frequently confused with Coral Snakes but they differ in the band arrangement.

These are just a few of the popular ones but shades and colors may vary from olive to orange with spots, speckles, and patches.

How To Discipline A Great Dane Puppy? (4 Alternative Punishments)

1. These snakes are not poisonous, some species have small teeth but no fangs and no venom.

They are constrictors that hunt their prey via scent, squeeze their captured prey till they lose consciousness then swallow them whole.

2. Like most snakes they would only respond if they feel threatened, they emit a nauseating musk and shake their tails mimicking a rattlesnake to chase away predators.

There is a King Snake that has a similar color pattern to a Coral Snake which is venomous and once it flashes its colors it can chase predators away.

The King Snake can also play dead and spray its feces on a predator to drive it away.

Puppies and dogs may get bitten if they aggravate a King Snake and they would be susceptible to getting sick even though there is no venom.

The bitten area can get an infection.

How To Avoid Your Dog Getting Bitten? 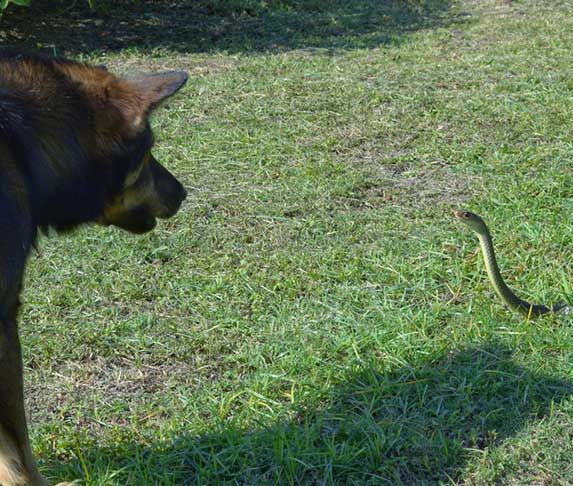 1. Take your dog to Snake avoidance training classes. If these are not available near you then you can talk to your trainer on if they can arrange for this to be done for you and your dog.

They are trained to recognize the sight and smell of snakes and how to avoid them.

2. If the outdoor area you are going to has reports of snake activity, like a hiking trail, it would be best to stay in a safe area like the trail.

3. Keep your dog on a leash and you can control where he goes and he can avoid getting bitten by a snake.

4. Clear any overgrown brush in your backyard to reduce hiding places for snakes and your dog can have free range to play without you worrying so much.

How To Treat A Snakebite From A King Snake?

The first thing is to identify the snake that bit your dog is actually a King Snake.

Despite not having any venom the snake bites are still quite painful.

Dogs would usually be bitten on the face or neck since they sniff things when they are curious.

A snake bite would leave deep horseshoe-shaped teeth marks that would become open wounds that can get infections if left untreated.

Since there is no venom from a King Snake you would only need to treat the snake bite region as you would an open wound but if you notice any changes in your dog’s condition you can call your veterinarian.

If you are not sure if the snake is one of the King Snakes you can memorize the color of the snake and take your dog to the veterinarian immediately for treatment.

They can help you identify the snake, even if it is a venomous snake treatment for the different venoms that differ.

It is important to keep your dog safe but King Snakes are also facing a decrease in population due to attacks from carnivorous ants.

They may be facing endangerment if the decline continues.

So if you do see and King Snake and identify it, let it be or call animal control to take it safely away.

It helps control the number of other venomous snakes.