Cats and dogs are the absolute fan favorites when it comes to pets.

Although the bubbly personality of dogs is the exact opposite of the grumpy cats, it still is a great curiosity to know what their offspring would look like.

As far as science goes, cats and dogs cannot mate with each other. It is simply not a matter of animal preferences, but there is more to it than what meets the eye.

And we will cover some of the reasons behind the inability of cats and dogs to mate and reproduce.

What Are the Factors Governing Mating? 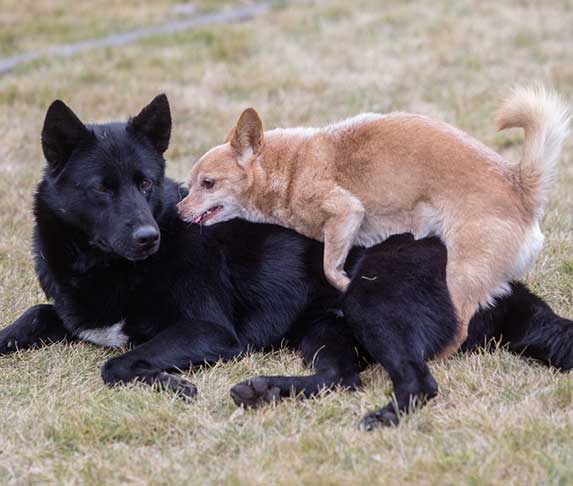 Mating, simply put, is the act of transferring genetic material from opposite sexes through copulation.

It is the principal driver of life.

The reason why the world remains populated is because of mating.

However, there are specific barriers that govern mating, which influence the preferences of a particular species for a partner.

Cats and dogs have their partner preferences as well, and the following factors influence this:

We will discuss the abovementioned in detail in the following narratives:

It is no longer a new concept to know that its genetics governs every living species on earth.

Humans have genes, so do animals, including our beloved cats and dogs.

Every animal’s behavior, physical characteristics, mating patterns are all influenced by the genes of that species.

To be more specific, why dogs bark, wag their tail, breathe with their tongue out, or why cats hiss, meow, and look like small fluff balls are due to their genetic make-up.

That being said, one reason why cats and dogs could not mate is that there is too much variation in their gene codes that they are simply incompatible.

The difference is similar as to why humans do not find crocodiles attractive and suitable for mating.

Genetics is the factor that plays the most significant role in mating preferences among all species.

To put it simply, mating genetically distinct species is impossible.

Although genetics plays the principal role, estrous synchronization is also a factor that affects mating in animals.

The estrous cycle is the period of fertilization among animals, more commonly referred to as the “in heat” period.

The difference in estrous cycles of animals also influences the mating potential.

If we presume that cats and dogs share the same gene code but have different estrous processes, reproduction is impossible.

Dogs are generally diestrus or experience fertilization twice a year (every six months), while cats are polyestrous, being in heat for 2-4 times every year.

The incompatibility of their heating season also makes mating between these two species as a moot point.

Do Dogs Get Along With Ferrets? + How to Introduce a Ferret to a Dog

Pop culture has featured cats and dogs as mortal enemies.

Tom and Spike are number one enemy; cat persons are constantly in battle against dog persons, always compared, etc.

The differences highly influence their behavior.

Dogs’ enthusiasm is the opposite of cats’ laid back and mind-your-own-business attitude.

These differences in behavior between the two animals influence their mating and preference.

To put it simply, they may find each other’s temperaments and disposition annoying.

And if there are cases where both animals get along, it is simply more of a friendship than a mating.

While in some other species in the animal kingdom, mating behavior and courtship play a significant role. Like which animal has the most beautiful feather arrangement in peacocks.

The difference in the reproductive system is the most palpable factor that limits interspecies mating.

Although cats and dogs are generally similar in physicality, they are both quadrupeds.

There is not much reproductive system variation, but the first three mentioned factors pose a limitation in their mating potential.

But since they hail from different species, imagine snails and grizzly bears.

These two certainly are different in terms of reproductive built, which poses mating impossibility between the two species.

Were There Isolated Cases of Cat-Dog Mating Evidence?

Yes. There have been claims from the 20th century that cats and dogs were miraculously able to produce offspring.

In 1970, a pet shop owner named Roy Tutt claimed that his pet cat and dog could give birth to an interspecies hybrid.

During the time, scientists and the media were appalled at such discovery when Tutt’s black cat named Patch allegedly bore his Scottish terrier pet, Bones’ offspring.

He was featured in news articles and invited for TV appearances to tell the story.

The puppies had black fluffy bodies, triangular ears, and round eyes.

They were dogs, and the incident was dismissed as a hoax.

In 1937, Laura Bedform, a barbecue stand owner, claims that a cat gave birth to three cats and two dogs in Miami.

A day later, when news services arrived, three witnesses discredited the big news, and it was declared a hoax.

Is There A Possibility for A Cat-Dog Hybrid in The Future with Tech?

With the currently available research on such matters, it is still impossible even with the latest technology.

And it would not change according to human preferences, even with tech, unless nature wills it so.

Besides, even if cats and dogs are to mate with each other, there is no guarantee that fertilization will occur afterward because of the many differences governing the species.

Cats and dogs are beautiful as they are. They each have their strong points and fun quirks, and this is what makes them independently unique.

There is no need to create an interspecies hybrid of the two just because humans demand such. Instead of helping, forcing these two different species to mate may affect their evolution and nature’s balance.

We have lived for countless millennia and have domesticated cats and dogs separately.

If evolution decided it fitted for the interbreeding of these animals, then it would have happened ages ago.

Cats and dogs are made differently, so we should not attempt to force things.

They should be loved just the way they are, no matter the quirks.