This is usually information that breeders who keep male dogs tend to find useful.

It is also very useful information for someone who wants to breed a female dog.

This information however is not limited to breeders only.

It can help you get whether there is the chance of getting many unexpected puppies running around your compound.

This saves the dog owner from the stress and pressure that comes about when one is not prepared for such happenings.

The answer is not as simple as you would expect to hear but let us break this topic down a bit.

How many times in a day can a male dog mate?

They can easily mate more than once a day without fatigue.

This, however, allows the sperm to degrade the more times the male dog mates with another female in a day.

Even though the male sperm tends to deplete, it is very possible for females to get pregnant regardless of the number of females the dog has mated with before.

how many times can a male dog mate with a female dog in a day “successfully”?

There are a number of factors to be considered when it comes to the successful mating between a male dog and a female dog.

On average, a male dog can have approximately two successful mating sessions in a day with other female dogs.

This does not mean that if a dog is given the opportunity to mate with other female dogs, he will not.

What is being discussed is the number of successful mating that averagely happen in a day.

When it comes to mating, there are no conditions set.

When a dog wants to mate, and the female agrees to the mating process, they will mate whatever a number of times as possible.

Will a male dog lose interest in the mating process after mating? 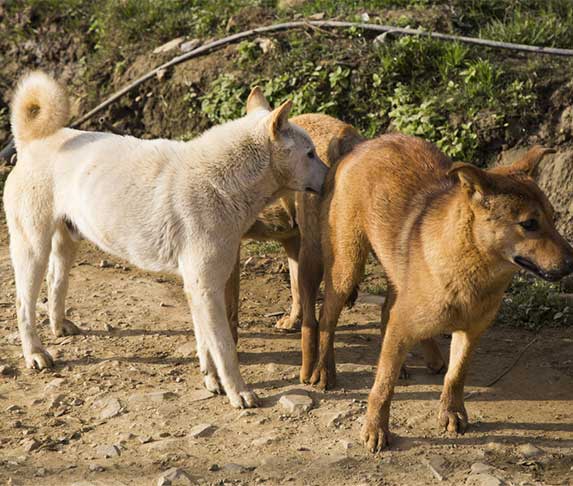 When it comes to this topic, it is important to consider age as a significant topic of discussion.

It is possible for the male dog to lose interest mainly because of a decrease in libido which happens as the male dogs’ age.

They tend to then lose interest in females during this period.

Apart from age, it is important to note that your dog may be experiencing a health problem that leads to loss of interest in mating.

You could go to the vet to confirm that everything is okay, or not.

Personality and temperament is also a minor factor but should be considered as well.

Maybe your dog is just a bit shy with the female dogs and will probably get over it eventually but it is important to give your dog time.

Do not pressure them as they may retreat back into their shells.

What happens when a male dog decides to mate more than two times a day?

Studs have that one main job and that alone.

This means their genes have to be perfect.

This makes them get taken care of as carefully as possible.

They are usually put on special diets and have health checkups regularly to ascertain they are healthy.

Dog breeders with studs usually can mate them once a week.

Some prefer to do it a couple of times a year.

With all the different information relayed from dog breeders, it is evident that all of them agree on the fact that studs should not be mated more than once a day.

Most breeders actually prefer to mate them weekly as opposed to daily.

This is because they have reason to believe the quality of the sperms lowers once they begin to frequently mate often.

A dog with low-quality sperms will affect how successful impregnating other females can be.

As written above the more times a male dog mates, the lower the chance of impregnating a female dog.

This is because of the low sperm count and sperm concentration.

Note: Studs are male dogs whose main purpose is to breed with female dogs to get puppies.

For breeders, how many times a month and year can a male dog mate successfully? 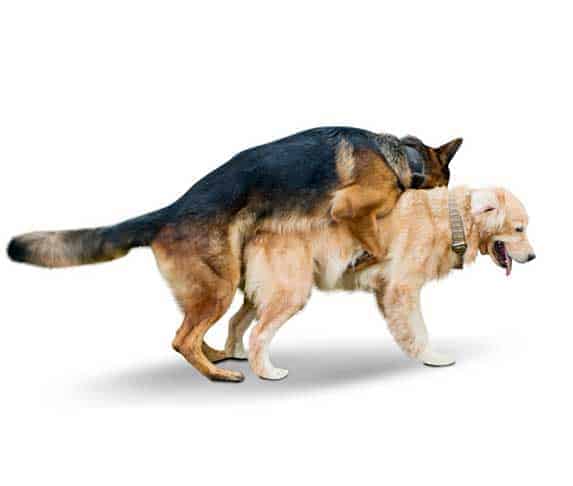 As written above, a male dog is capable of mating every day but with the risk that their sperm concentration may reduce gradually reducing their chances of impregnating a female dog.

Unlike females who undergo heat, male dogs can mate however much they would like.

A successful mating that happens is dependent on whether the female was on heat.

If a male dog ends up mounting a female dog when she is not experiencing heat, there is little to no chance of impregnation being successful.

What does heat mean?

Heat is a period which a female dog undergoes that is its fertile window stage.

It goes through heat twice a year with approximately six months between their cycles.

This makes it seem like the number of female dogs available to mate with reduces.

However, that is not correct.

The period in which a female dog undergoes heat depends on the time of birth.

Why is that important to understand?

It is because it helps explain that unless the female dogs were birthed at around the same time, they do not undergo the process of heat at the same time.

This means that if you have a male dog that you do not put on a leash, things may become a bit difficult for you.

Especially because we have established that there is always a female dog on heat at any time of the year.

This can end up surprising the owner with puppies they did not expect.

It is therefore important that if you have male dogs; put them on a leash and do the same thing for female dogs as well.

What age is appropriate for your dog to start mating?

On average, the male dog begins to breed at around 6 months to 12 months.

Each dog reaches their own sexual maturity at its own time so it is not something common to all puppies.

When they reach sexual maturity, they start to act strangely.

This may be actions such as humping furniture surfaces and leaving urine on some things in a way of scenting them they eventually will outgrow it so there is no need to worry.