Dogs bark every time, when playing, when they are scared, before attacking.

They bark when they hear other dogs barking or when frustrated and lonely.

Dogs can learn to bark at specific times or in a different context.

This makes it easier for their owners to differentiate the barks based on the context.

When they are hungry or annoyed they will be able to know.

Yes, dogs understand each other through barking. They communicate through barks to both people and other dogs. It does not necessarily have meaning like the communication between people but their barks represent some type of communication that expresses their current emotional state.

Excessive barking may be annoying and it could be a behavioral problem. Wolves, their ancestors, do not bark as much as they do. It is probably due to the domestication of dogs that made barking a tendency for them.

Besides the use of body language and scent, barking is one of the effective and natural ways in which dogs communicate.

It can be emotional, to show when frightened, excited, lonely, and can also be situational to show protection or alert their owners of danger.

Different dog breeds bark better than others, these are dogs that are good at hunting and protecting homes.

Terriers, Beagles, Yorkshire, and Chihuahuas are examples of dogs that are the most vocal.

If you are used to rewarding your dog with different treats when they bark with things like food, walks, or treats, they sure will use barking to benefit themselves.

10 Instances When Dogs Bark At Other Canines

As a responsible dog owner, you have to decipher the barks and assign them to different contexts and emotions to be able to understand your boyfriend better.

Dogs bark at different occasions and things. They bark when: 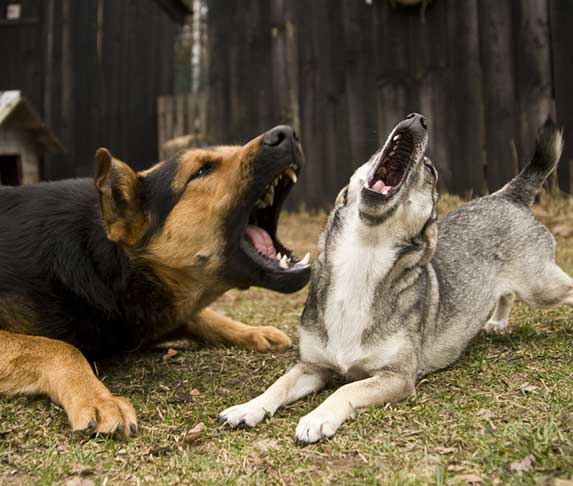 Most canines will bark when playing with other dogs or people.

They just love being friends with everyone.

The growls they make are signs that they are happy and most of the time the playful growls are followed by the dog bowing their front legs and wagging their tails.

When dogs notice new people or animals passing by near their homes they will bark at them.

Dogs consider any place they associate themselves with ad their territory.

Their puppies, you as their owner, their yard, or even your car, and they are set out to protect it.

They will bark at other dogs that are near their home as a way of telling them that that is their territory.

Dogs bark at other dogs or people to get attention or treats such as food, toys, or cuddles.

Dogs with fears, phobias, or separation anxiety normally bark to soothe themselves.

Some dogs will bark when other dogs or their human friends leave them.

Their barks will be high-pitched.

If their reason for barking is separation anxiety, it is important to get them a specialist or a trainer.

Why Do Dogs Blep? (8 Possible Reasons)

Irrespective of their size, both small dogs and big dogs emit very big barks which are their weapons against predators.

The barks are low pitched and longer compared to normal barks.

This kind of bark or growl can be a reaction of a dog to another that was playing too rough or was too close to their food.

When you decide to do things your canine loves, they will bark but it will be soft and playful because they are happy. 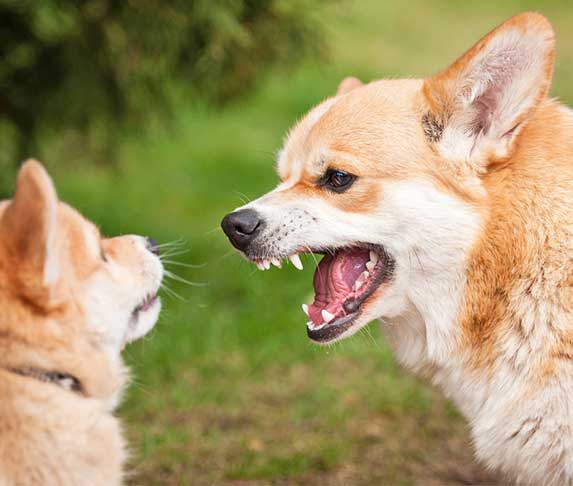 When dogs haven’t had many chances to socialize and play with other dogs, they become nervous and scared because they do not know how to interact with fellow dogs.

Their reaction is mostly lunging or pulling their leash to run away from the other dog or barking at them to make them stay away from them.

Unlike the other dogs who will want to run away, some dogs that haven’t socialized a lot will bark at the sound of other dogs in the neighborhood.

it is not even a must for them to see the dogs.

Along with wagging their tails or whining, dogs will bark at other dogs or people as they try to greet them.

Dogs are always restrained by a leash, a gate, a fence, in a crate.

The moment they see another dog or smell them at a distance they will start barking either with:

The frustration of always being restrained will make your dog react by barking at any dogs they see.

All these instances are based on different contexts.

In the past, people brushed off dog barks as seeking attention.

However, with advancements in studies of dog behavior, researchers have discovered that the acoustic bark characteristics are consistently based on the context or situation that the dog is in.

When playing or when in isolation or loneliness, dog barks are acute whereas, when a stranger walks in the barks are severe, longer but with smaller intervals in between the barks.

A study that was conducted, showed that dogs and people from a young age as 5 can be able to tell the difference in context.

People were tasked with listening to a recording of a dog barking and they were able to identify the context in which the dog was barking.

According to the results of the study, there is more success with barks emitted during, stranger approach, during defense training, and when a dog is alone contexts.

In contexts such as when a dog barks when watching football or before it goes for a walk or when playing is less recognizable.

When interpreting the context in which the dog is barking, it is crucial to consider the size of the dog.

Since, the relationship between the length of the vocal system, the dog size, and features of the dog is close and could make the barks of different dogs in the same context vary.

A small-sized dog barks are more acute compared to a big dog, irrespective of their emission context.

Dogs intentionally modify how they bark as they communicate with other dogs or people.

It is clear to conclude that analyzing barks of different dogs of different contexts, can be used to evaluate and obtain the emotional state of the dogs.

This information can be used in the identification of problems of too much vocalization.