Every month there seems to be a new fad diet that is supposed to be the “end-all” lifestyle.

Claiming the best way to lose weight and improve your health.

In most situations, they will burn hot for a few months but fizzle away just as quickly into obscurity.

The keto diet, on the other hand, has stayed fairly relevant for quite some time now.

No doubt due to its large claim in its ability to prevent or even reverse cancer in some situations.

This has gotten some dog owners to wonder if putting their pet on a keto diet could be just as beneficial to them as it supposedly is to people.

In short, a dog on a keto diet is not harmful or dangerous in the long term, but it may not be the ultimate cure as some preach it to be. Not many people might not even know how it compares to what people regularly feed their pets.

Understanding the difference, what a keto diet actually is, and it is less than substantial results could help a dog owner make a better-informed decision on how to best protect their pet’s health.

What Is The Keto Diet? 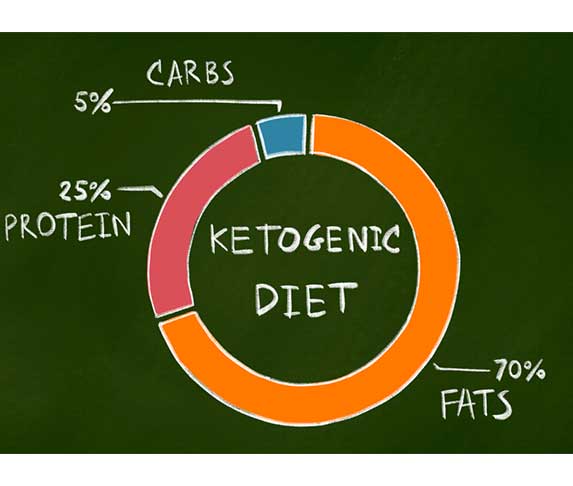 Most pet owners don’t think twice about what’s actually inside the kibble they consistently feed their dogs.

So when putting them on a specialized diet such as this, it’s of the utmost importance to understand it.

Aimed at having the body use the healthy fat for fuel as a means of weight loss.

The actual effects of keto have proven to be considerable enough for further review.

But some claim its abilities extend far beyond shedding pounds.

Due to the diet’s ability to help you lose fat, there are those who claim keto is effective when it comes to battling diabetes, health disease, cancer, and even epilepsy.

The latter two, however, have yet to actually be proven to be diseases that can be treated by keto.

Either way, while there are undeniable health benefits of keto short-term, many still question whether it can actually sustain someone for long periods of time, and if it can, should it?

Not enough research has been conducted to conclude this for humans, much less for dogs.

When Can You Feel Puppies Move In Pregnant Yorkie?

Your Dog on Keto

When choosing whether or not to start your dog on keto, it is best to stop and ask yourself why you are really doing it.

If it is to put your dog on a cure-all diet so it never gets cancer and it never has to go to the vet again, then it is best to look elsewhere.

If it is to help your dog lose fat and gain an overall healthier lifestyle, keto might be right for you.

Keep in mind that just because you have good interests, that doesn’t excuse you force-feeding your dog anything it doesn’t want to.

Some dogs may simply reject the food, and you can’t starve them until they do.

Before fully committing to anything, one also has to consider the fact that keto isn’t a “one size fits all” meal plan.

the individual is highly important.

First, one should make sure their dog doesn’t have any allergies that need to be accounted for.

As well as considering their dog’s weight and if it correlates with their breed and age their dog’s health, to begin with.

If your dog is already healthy with no signs of later issues, then you should also consider if your dog truly needs to be on an alternative diet.

Once all of that is taken into account, then it is time to start planning out meals.

What to Feed Your Dog on Keto? 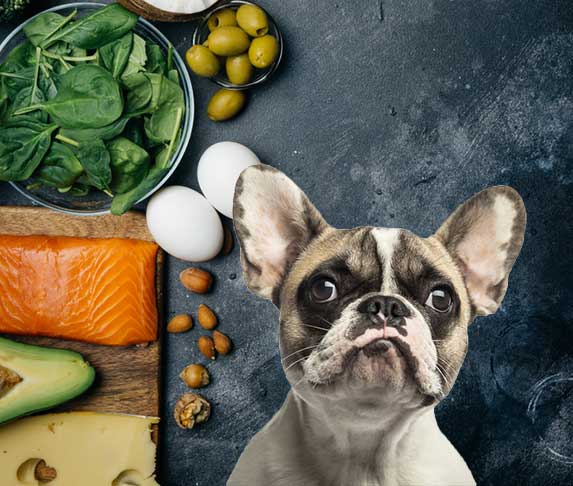 Part of the rationalization to put your dog on keto is that it will give their diet more resemblance to what their ancestors naturally ate.

Which for the most part is true.

That means that while healthy fats are going to be a large component in their diet, so will protein.

White meat is generally the go-to for this, as well as fish, and leafy greens.

Offals, otherwise known as organ meats, can make dishes more flavorful for your dog, as well as provide several nutrients beneficial to their health.

Cheese is a prime source of healthy fat in the diet as well.

While you should fully take your dog’s personal needs into account, the generally accepted rule of thumb is that a keto diet should be made up of 70% fat, 25% proteins, and 5% carbs.

For those looking for something more sustainable and less work, there are keto dog foods on the market.

Their quality, however, can be questionable in some cases.

It is best to look at reviews and the ingredients to make sure that your pet’s meals are actually as healthy as they can be.

Either way, there will be some trial and error involved in finding what your dog likes, and what they will eat.

What Else to Consider?

As stated before, some dogs just won’t accept the food, and while testing to see if it can be adjusted to their liking.

One has to prepare for the fact that the keto diet just may not be for their pet.

What is not always thought about as well as the amount of work that goes into creating each and every meal their dog will eat.

If one chooses to take this diet seriously, they have to be prepared for the amount of work involved.

This lifestyle will also come at a higher price as well, which isn’t something everyone can afford.

We all want to ensure that our dog is as healthy as they can be.

The regular kibble we feed them may not be giving them the best chances at that.

There is healthier dog food on the market, but those who like to take it a step further may find interest in keto.

While it may improve a dog’s health who already deals with a disease such as cancer.

One shouldn’t expect it to be the cure.

Keto can be an excellent diet that helps regulate body weight and promotes a better-functioning body.

But only when it is used in an effective and healthy way.