Remember Droopy from the Metro-Goldwyn-Mayer cartoons?

The one with distinctive and cute drooping ears and a sad-looking face?

Despite its blatant anthropomorphism, it has always been one of the cutest cartoons to exist.

It is a prime example of what a Basset hound is.

This time around, we will be dwelling into a more specific kind of Basset hounds, known as Basset bleu de Gascogne or Blue Gascony Basset. We will explore the heritage, special characteristics and other general information that makes these dogs delightful pets.

We will try to illuminate some key points people need to be aware of about this breed of dogs in the following narratives.

Stick until the end to know more about these Blue Gascony Bassets. 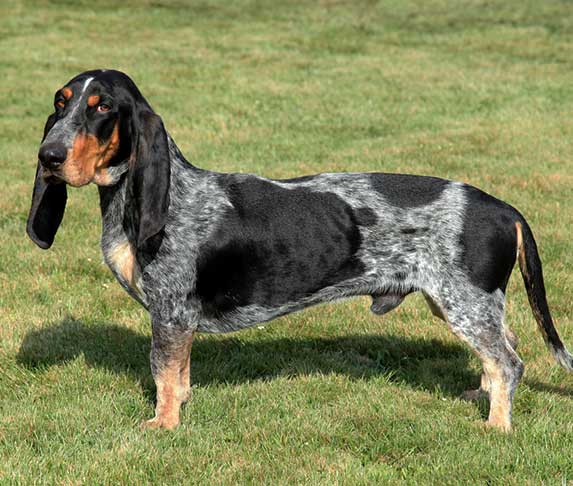 The Blue Gascony Bassets are said to have originated in the middle ages, descended from the now-extinct Grand Bleu de Gascogne or Great Gascony Blue.

These animals have a distinctive blue coat and are not your average home pets, standing at around 70cm in height and 77 pounds in weight.

They were initially bred from the St. Hubert Hound in medieval times to hunt game, wolves, and bears.

Their vocally loud barks will be bothersome if you live in a quiet neighborhood.

Their descendants, the Blue Gascony Basset, are smaller than their ancestors, averaging only 35 cm in height and weighing 38 pounds.

Despite this, however, people still used them for hunting as their short feet were more subtle and can keep up with hunters on foot.

Blue Gascony Bassets almost faced extinction nearing the 20th century, but one breeder in the name of Alain Bourbon ensured the survival of the breed.

To date, people can enjoy the company of Blue Basset Hounds thanks to the initiatives of breeders at the time.

As of writing, the Blue Gascony Bassets are not recognized by the American Kennel Club yet, but they have been given several recognitions from other existing dog enthusiast groups.

The height and weight, which have been mentioned previously, indicate that this breed is on the smaller end of the spectrum.

This breed has a smooth coat that is generally tricolor: white, black, and the distinctive blue.

Their physical morphology resembles those of the Grand Gascony Blue except for their significantly shorter legs.

Nevertheless, the breed’s majestic look is highly maintained and observed in their Blue Gascony Basset descendants.

Here are some of the notable things one should be aware of before they buy a Blue Gascony Basset:

Nothing too difficult to handle for seasoned dog owners.

They are generally low maintenance, so shedding can be reduced by brushing their skin.

On the other hand, grooming will not be much of a hassle as their hair does not grow as thick.

Although providing them with seasonal flea treatment is a must to keep them safe from pestering ticks on top of regular cleaning of the eyes and ears to avoid potential infections.

Overall, their level of non-hypoallergenic is manageable for busy bodies that do not have many resources for grooming.

Given their history of being hunting partners of man, being agile and active are natural characteristics of Blue Gascony Bassets.

It means that they have ample energy in their body for daily outdoor exercises and running.

They are full of vigor and stamina, which demands expanding throughout the day.

Morning walks before work or afternoon hanging in the park would be the best options for these kinds of dogs if they have an avenue to release their pent-up energy and have fun.

Dogs are happy when they have their noses on the ground, sniffing the trail of some interesting smell they picked up.

How To Lower Creatinine Levels In Dogs?

3. They are pack dogs

If you plan on taking these dogs as pets, make sure that they always have a company with them as they are more used to living in packs like the older days.

If you happen to work from home, then that is good enough for the Blue Basset Hounds, if they are not in solitude.

Since they are pack dogs, living alone is not ideal, and their tolerance is relatively low.

They will show signs of irritability when such happens, often through whimpering and howling.

4. They are a vocal and chatty breed

One thing to note about Blue Gascony Bassets is their chatty nature.

They are very fond of barking and howling, even though they are pretty laid back at home.

It will need quite a bit of training to teach them to be silent on command.

Living in a quiet neighborhood with an untrained Blue Gascony Basset is not ideal as others may raise their concerns about the animal’s nose.

Either you live somewhere relatively far from the crowd or train your dog to be silent on command would be advisable in such scenarios.

5. They are generally healthy

There are no known kinds of sicknesses that are observed among all Blue Gascony Bassets.

Since they hunt dogs, which were bred for more dynamic physical activities than usual, health is on their side.

The only concern is back problems when this breed ages.

Since they have an arching back, it might pose difficulty in the future.

6. They are very loving and people friendly

Perhaps their most important characteristic is being a great all-around family dog that loves its pack.

Blue Gascony Bassets love being a part of family affairs and spending time with them.

Although the friendliness may sometimes extend even to strangers, which renders them ineffective guard dogs.

Nevertheless, what matters is that the family, especially children, are safe in the presence of this breed.

If you plan to get a Blue Gascony Basset as a pet, then it is good to know things about it first.

This dog breed is typically friendly and relatively easy to raise.

However, you still need to consider more things.

You can start by brushing up on the information we listed in this article.