So we all know that Mcdonald’s isn’t always the healthiest option for us to eat at the end of the day.

But it’s quick, easy, and makes for a nice reward after hard work.

Sure, you’d feed it to your family, but what about your dog?

Say it got into your bag while you weren’t looking or you just need a quick meal for your pet, is it OK for your dog to eat McDonald’s?

The short answer is: yes, while it isn’t exactly healthy for your dog to eat, a hamburger or a few fries won’t put it in danger, as long as certain precautions are taken care of first. It’s important to know what those precautions are so you can best watch out for the health of your pet.

People generally know there are a few major foods that are fine for people to eat, but that should never be fed to a dog.

Watching out for those is easy enough, but when it comes to fast food meat like this, it’s hard to tell what is and isn’t ok, and just why that is.

The answer can be found in the biology of our stomachs.

Partially due to size difference and the way a dog’s digestion works, they’re not able to consistently eat the overly fatty foods that are generally safe for people to consume.

The chemical compositions of some foods factor into this as well.

There are several components of foods we may eat on a daily basis that we don’t know about, but can be extremely deadly to dogs.

It’s especially hard to tell at times because like humans, they may have to eat a large amount of whatever it is to know it’s dangerous.

By then, it could be too late.

Most of the time, however, a little bit of these dangerous substances won’t be enough to kill or seriously harm your pets.

Although it does depend on the size of one’s dog as well.

Most likely, the side effects one will see are vomiting or diarrhea, but an abundance of either of these should warrant a trip to the vet.

What to Avoid at McDonald’s 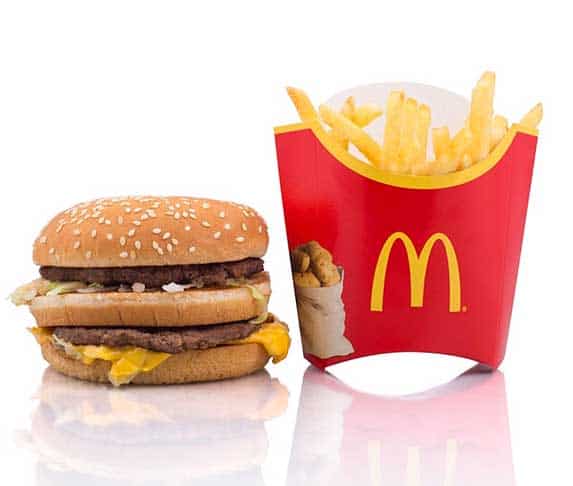 Now, when thinking of what to feed your dog at McDonald’s, the first thing that may come to your mind is a hamburger, which if prepared right, can be one of the healthier options on there.

There is a fair amount that goes into this, though, such as figuring out what parts of the hamburger are ok for the dog, and what parts should best be left off.

Doing so could greatly affect the health of your pet.

A McDonalds’ hamburger is fairly standard with everything you’d expect to be on it.

When analyzed through this scenario, you’ll see that just may be the problem.

These items should definitely be avoided when ordering for your dog:

What Can Dogs Eat at Taco Bell? + List of toxic Taco Ingredient for Dogs

What Else to Consider

Something that isn’t always considered, with ourselves or our pets, is the number of calories they should be consuming every day.

For dogs, the general rule of thumb is 25 calories per pound every day, and most items on the menu range from 500 calories to over a thousand.

If you know the weight of your dog, you should keep that in mind when ordering from the menu.

Luckily, Mcdonald’s makes it easy to pick what it is you want and off your hamburger, whether you order in-store or online.

Some restaurants even give you the option to take the salt off the patty, which is especially useful.

Knowing any dietary restrictions, like if your dog is lactose intolerant, is another important factor to keep in mind.

What is OK For my Dog to Eat? 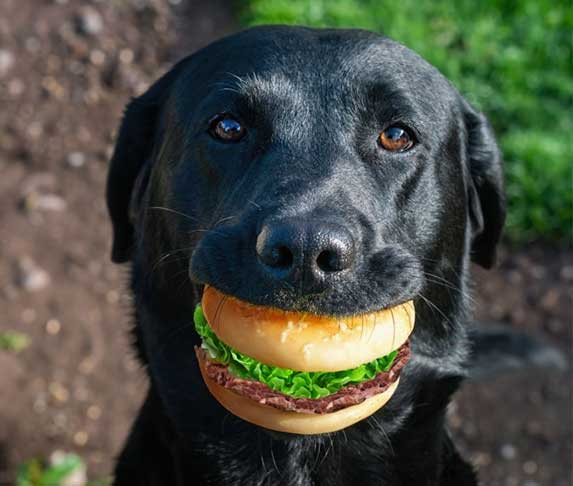 Generally speaking, a majority of the foods at Mcdonald’s are safe for your dog to eat, as long as they are kept as plain as possible and given in small amounts.

A hamburger patty or a couple of chicken nuggets won’t kill your dog, it’s all about moderation and looking for signs of discomfort in then.

A McChicken patty should also be safe to eat if it’s served alone without any of the mentioned toppings or condiments.

Another thing to keep in mind is, even if the meals are given in small amounts, they shouldn’t be frequently given in quick succession.

Eventually, the dog may get a taste for the food and take it upon itself to scour the house for other food to try and that could lead to them getting sick or even worse.

Vomiting or diarrhea is also a clear sign to take away whatever you’re feeding the dog.

We all like to binge on McDonald’s every now and then and sometimes it’s just the most convenient meal that we have available to us.

Sometimes, we also need a quick meal alternative for our dog rather than let it go hungry

As long as it’s kept a rare thing and given very carefully, McDonald’s should be safe for pets.