Playing catch with your dog is one of the best past times you can have with your beloved pet.

It gets both of you outdoors, a good bit of exercise for both, and you get to see your dog happy.

When it comes to choosing what to play with, most people might just find a random stick on the ground and start using it without really thinking.

However, it might be more important to consider what you are letting your dog play with than one might think.

Letting your dog chew on sticks or wood will not be immediately deadly, but it is a dangerous habit that should be discouraged if ever noticed.

Understanding why wood is dangerous for dogs to chew on will help you stop a problem before it gets out of hand.

Why Do Dogs Chew on Things? 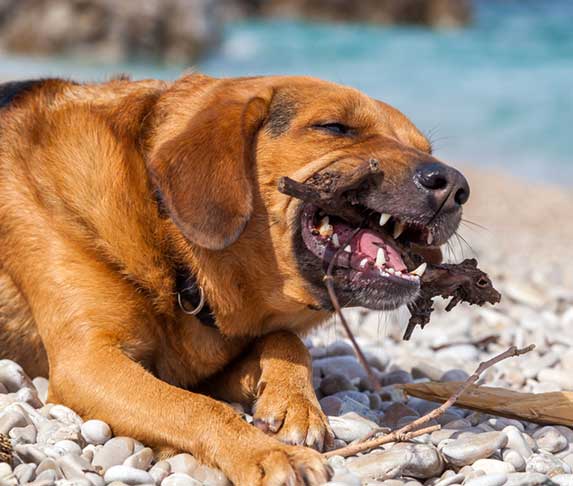 It is best to first understand why your dog is finding something to chew on in the first place.

Dogs trace their ancestry back to an ancient breed of wolves, Canis Lupis, who transported their prey with their mouths.

With food not being in as high of supply as a modern dog’s, these animals most likely took every bit of meat they could off of the bones, constantly chewing and sucking on them until they were clean.

This tendency, like other memories, is able to be passed down through genetics.

Dogs who are particularly anxious might pick up the habit of chewing on things, especially those who have separation anxiety.

The act of chewing on something gives the dog a way to distract themselves if they are feeling tense or scared.

And it may even be a way for them to focus on something other than pain.

Either way, it is in dog’s nature to want to chew on objects, whether it be from genetics or a habit they pick up on their own.

While there is no inherent need to discourage this, responsible owners should regulate what they allow their dogs to chew on.

Why Chewing Wood is Dangerous For Dogs?

As stated before, letting your dog chew on wood won’t kill them right away.

It is not terribly harmful to pets in small amounts, but it is a habit that should be trained out of the dog as soon as possible.

There are a plethora of reasons why real wood should be avoided as a dog’s chew toy:

With enough chewing, the wood can fracture, leaving sharp splinters in a dog’s mouth that could cut it up and cause infection.

If a dog were to then swallow the splinters, this could lead to choking if the fragments are big enough or even tearing the esophagus.

If they don’t get caught in the esophagus, then the splinters may travel all the way to the stomach.

Where they can end up seriously harming the lining of the dog’s stomach.

If the splinters that are swallowed are large enough, they can end up lodging themselves in the dog’s intestinal tract.

Which may require surgery to remove.

Many types of wood can be quite toxic to dogs.

And while they may not have much of an effect in small amounts, continued exposure can have deadly consequences.

Some trees or outside furniture may be sprayed with chemicals to preserve them or keep animals away.

So when ingested by dogs, this could lead to them getting terribly sick.

Anxious dogs may need something to chew on to distract themselves in difficult situations.

But if a habit of chewing wood is formed, any of these problems can become a reality.

If a dog has learned they can chew wood and get away with it, they might find wood with traces of ash.

Which if ingested in large amounts, can cause them to get sick.

Again, if a dog learns they can chew on any wood they find, this might encourage them to chew on furniture and ruin it, as well as their teeth.

What if I Find my Dog Chewing on Wood?

If you find your dog chewing on wood, there is no need to rush them to the vet or to take any drastic action.

At most, an owner should calmly remove the wood from the dog’s mouth and replace it with an approved toy.

This encourages the dog to play with things other than sticks and wood and shows that they won’t get rewarded if they continue to chew on wood.

If anything, an owner should do their best to avoid this habit from becoming a consistent behavior in their pet.

If an owner is looking for non-toxic wood for a dog to chew, the following are a list of some of the non-harmful wood types:

What Can my Dog Chew on? 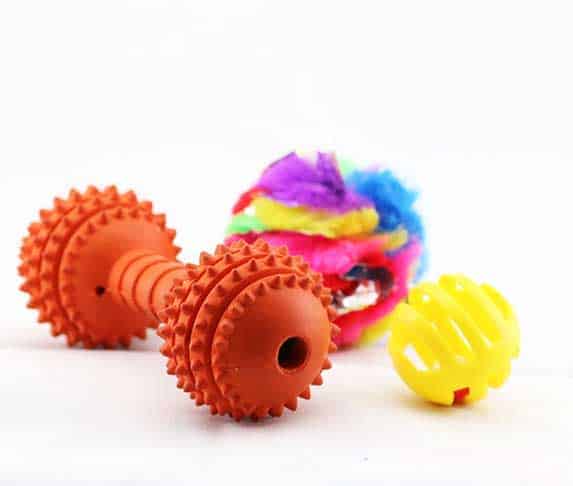 When looking at toys for your dogs to chew on, it is best to take their size and habits into account, and test which products your pet likes best.

Generally, real animal bones are a good place to start as they are fairly durable, plastic or nylon bones, rubber toys, and dental chews.

Any product designed for chewing should also be looked out for, but it is great to experiment and see which your dog prefers.

Playing fetch or catch with your dog is some of the greatest fun the two of you can have.

And we all want to make sure our dogs have toys to play with when we are too occupied.

The safety and health of our pets, however, should always come first.

In this case, it is making sure to not let our dogs chew on wood.