Dogs, just as any other creature, can be a pain in the back at times.

And might make a mess of both our homes and our lives.

But the language barrier may at times prove harder to overcome than not.

This is especially true when a dog’s nature comes through, causing them to take actions that we as humans have trouble interpreting.

Laying on their back even while being scolded, for example, might seem strange to us.

And cause us to wonder why they might be doing so.

There are multiple reasons why dogs lay on their backs out of nowhere, even if they’re being scolded, chief among those being a sign of submission.

This is not always the case, however, meaning that it’s up to the owner to understand why a dog might be acting the way they are so that they can initiate more effective communication, especially when there is a problem needing to be solved. 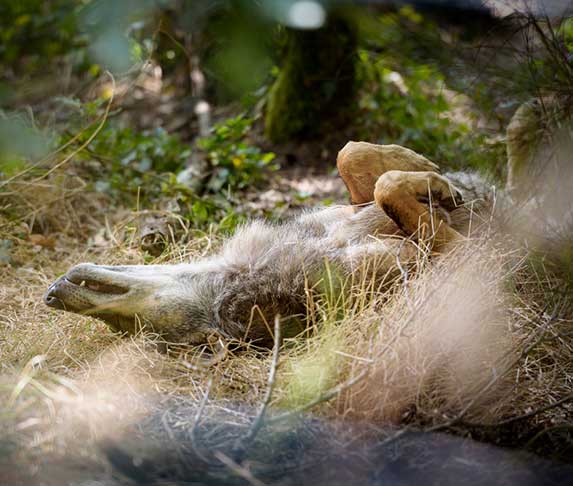 Many of modern dog’s weird traits or practices can be found by combing through their ancestry.

Or even just by looking at the behavior of wolves.

In wolf packs, each member has a role to fill to benefit the group as a whole.

Although not all are that glamorous.

The highest two wolves are the breeding pair, the only wolves that are allowed to mate.

And usually, the first to feed anytime the pack makes a kill.

The next rank is the standard pack-member, the younger wolves who are waiting to grow up and make their own pack.

Also, the second to feed on kills.

The lowest member of the pack is the omega.

In a human sense, they can be compared to the “court jester” of the group.

They mostly act as a stress relief for the other wolves.

Playing a submissive role and letting their other wolves beat up on them to release anger.

To show submission, a wolf will roll onto its back, exposing a belly (a sign of weakness in the animal world), a trait that can be similarly spotted in dogs.

While dogs haven’t picked up the role of the omega exactly, they have learned from them to show submission to their owners.

Can Dogs Tell When They Are In Trouble?

“Guilt” is a complicated emotion that is actually a mix of several other feelings.

Meaning that there is a certain level of intelligence needed to truly comprehend it.

Due to this, they’re much more likely to just feel sad or bad that they’re being yelled at by their owner.

This means that they are indeed able to read their owner’s emotions and decipher limited meaning about them.

Dogs can make a link between an action they did resulting in a negative response.

Dogs still have innate nature within them.

Actions that they take that might not have been anything they learned, but still know all the same.

Due to the fact that they’re able to make that link between an action and a negative response, dogs can at least tell when they’re “in trouble”.

This will then kick in their innate responses, much like how a dog or even a wolf would react to the same situation in the wild.

One of these responses to being in trouble could be lying on their back, but there are plenty of other reasons for doing so.

Why Do Dogs Lay On Their Back? 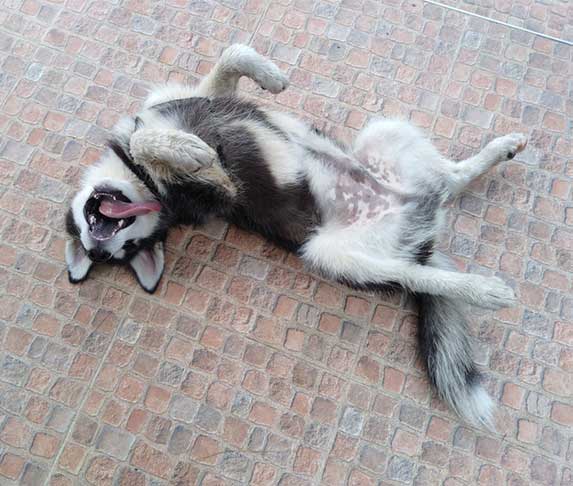 Some of the reasons a dog might lay on its back are:

Just like in the wild, a dog will try to defuse a heated situation by showing submission and exposing its belly

The act of exposing itself is one not usually done in the wild, so when your dog does it for you, it’s showing how safe it feels

Dogs can sometimes take advantage of their cuteness, using it to calm down an angry owner

Most dogs enjoy a good scratch, and a belly in the air is an easy way to ask for one

In the reverse scenario, dogs can find it comfortable to expose their body to the sun, allowing themselves to warm up

Many dogs enjoy sleeping on their backs for any number of reasons, meaning it’s best not to wake them up if they are

Since lying on their backs can be associated with scary situations, some dogs may do it to make the source of the fear leave, even if it’s just a sound

Just as much as some dogs show their bellies to invite touches, others do it to ward attackers away

How To React To This?

Dogs can be unpredictable and we may not always know the best way to respond to them.

After knowing one’s dog for a while, one should be able to synthesize the proper meaning from their actions and be able to tell if they’re comfortable or not.

If a dog is inviting touch, there’s no harm in giving them a quick belly rub.

If they’re doing it to appease you or show submission, they are showing that they understand they did something bad.

Anymore yelling isn’t going to do much to change the situation.

From a human’s perspective, dogs can have plenty of strange habits that are actually carried over from their distant ancestors and living cousins.

A responsible owner should do their best to understand these habits and what they mean for their pet, and respond accordingly.

Dogs can make mistakes and be frustrating, but punishment will only go so far in teaching them what to do.

The best way to avoid trouble with your pet is to reward them for good actions and an encouragement method.