Does your dog get excited about long walks in the streets only to sniff, take rounds, and pee on vertical objects like fire hydrants?

Ask many dog owners, and they will confirm that a similar thing happens when they go for walks.

It’s a bit embarrassing to have to stop at almost every fire hydrant in town to give him time to pee on it.

In this article, we’re going to handle the reasons for this queer behavior today.

Why are dogs fond of going round and peeing on almost every fire hydrant in the streets? Is it the painting of fire hydrants that’s so attractive?

It’s quite a normal behavior for any dog to do this. From ancient days, Dogs have been using urine to mark their territories.

Dogs instinctively like to mark their territory communicating to other dogs what is theirs.

When they pee on tall objects such as fire hydrants, these objects will maintain the smell of that dog.

This will therefore communicate to other dogs that that object belongs to that dog.

This is a very strong form of communication by dogs.

Wondering what else could be a reason? Let’s take a closer look, shall we? 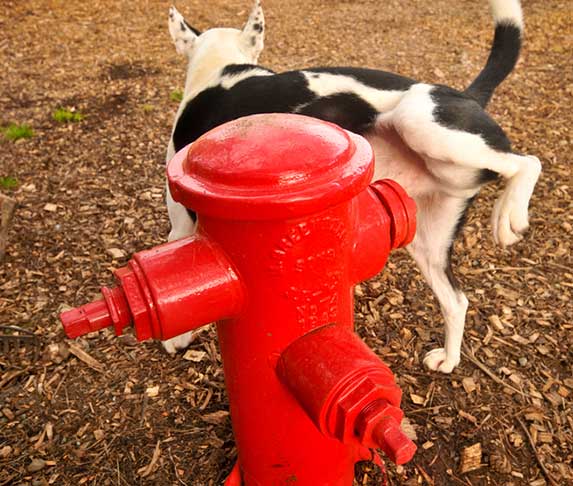 Fire hydrants are normally placed on every street corner in the suburbs.

Your dog, therefore, uses the fire hydrants as borders to mark its territory.

By urinating on the fire hydrants, your dog sends out a message to other dogs that it is also part of their territory.

Since dogs are territorial animals, this habit is not expected to stop.

In the modern setup of suburbs, dogs have to find ways to mark their boundaries.

Fire hydrants are a very good convenient option for them.

Unlike trees, fire hydrants do not have branches that can prevent the urine from spreading higher.

Dogs find hydrants as good surfaces on which to pee and stream the urine as high as possible.

This becomes a message of superiority sent to other dogs.

The height communicates the size of the dog to other dogs.

Larger dogs can stream the pee higher compared to dogs of smaller sizes.

The further the urine spreads, the larger the dogs.

3. The Scent Linger on Fire Hydrants

The smell of a dog’s urine stays longer on fire hydrants than on the ground and tree trunks.

When a dog finds the scent of another dog’s urine on a hydrant, it spreads its urine further to claim the territory as though saying, “do not interfere.”

Why Do Dogs Freak Out When You Sneeze? (9 Reasons)

4. The Paint On Hydrants Smells Nice

Dogs have a very powerful sense of smell and sniffing things naturally.

They find the smell of the paint used on fire hydrants to be like that of a dog’s pee.

When they come across a fire hydrant, they feel the need to mark it by peeing on it.

Experts have a theory that the paint on fire hydrants is attractive to dogs though there’s no scientific evidence to prove it yet.

5. To Send A Message About Other Dogs In The Surrounding

Urine is not a very pleasant smell to humans.

However, for the strong sense of smell by dogs, it’s a golden communication tool.

Dogs can tell a lot about the other dogs that have peed on a fire hydrant, just by smelling it.

Dogs can obtain information about the age, gender, fertility, and health status of other dogs by sniffing their urine.

Peeing on fire hydrants is dogs’ way of communicating about which other dogs are in the community.

6. Scent Spreads Over A Large Area From Hydrants

Dogs prefer to pee on fire hydrants because the smell spreads over a wide area from vertical objects.

From the hydrants, the scent of a dog’s urine spreads to a wide area.

The larger the area the urine spreads, the stronger the message passed to other dogs.

When a dog is anxious and stressed, it tends to overmark itself.

Anxiety occurs when there’s an abrupt change in a dog’s environment.

This change may make the dog feel insecure about his territory.

The dog therefore over marks its borders to secure its territory.

If you’re keen enough, you’ll observe that when your dog sees a new pet in the area, he will be distressed about sharing his territory and would end up peeing on all fire hydrants to claim his kingdom.

8. To Sound A Warning To Strangers

Since dogs are territorial animals, their homes and the streets they frequent are also considered their territory.

When a dog sees a stranger in their territory, he will send a warning message to the intruder/newcomer.

The warning sign is given in dog language which is by marking its territory by peeing on the fire hydrants.

This is a strong warning to the stranger that he shouldn’t interfere.

It’s a way of establishing their supremacy over the area they have identified as theirs.

9. Nature Made Them That Way

Naturally, dogs love to pee on vertical objects such as fire hydrants and telephone poles that they feel other dogs have urinated on just to mark them with their own scent.

There’s no scientific evidence that proves the reasons behind this crazy behavior.

Dogs find fire hydrants as an upright item that seems natural to pee on.

Veterinarians attribute a dogs’ love for fire hydrants to nature.

When you see your dog stopping to pee at almost every fire hydrant in town, you shouldn’t be upset —  it’s normal.

Even though humans take care of dogs today, they’ll still mark their boundaries since it’s something that’s in their genetic makeup.

Dogs are territorial animals who survive by claiming a territory to hunt and live in.

Other factors that account for the behavior are anxiety and distress, the attractive smell of paint on hydrants, and the ideal configuration of fire hydrants to nature.

The next time this happens, be patient with your dog and know that it is inherently in its nature and not bad manners.