Playing with your dog is very good exercise for you and him.

Fetch is one good game and form of exercise for your four-legged best friend.

But for some dogs, the ball is more than just a game.

If you have a Labrador dog who gets very excited when he sees or runs into a ball, you might be wondering why your dog is so obsessed.

These dogs become overly enthusiastic and develop an obsession with the ball.

They are so focused on the ball that nothing else matters.

They stare at the ball constantly, tease you for throwing it, or even sleep with a ball in their mouth.

Is this normal behavior?

And what can you do with your ball-obsessed dog?

If your Labrador has a ball in his mouth at all times, stares at the shelf when you put his favorite toy away, or he can’t be distracted from fetch even with a reward, it means he is very obsessed with balls.

Many pet owners find this incredibly frustrating because their dog does not do anything else but stay with the ball.

Read along to find out how to spot an obsessed dog and how to manage the strong love for the ball.

Signs of a Ball Obsessed Labrador 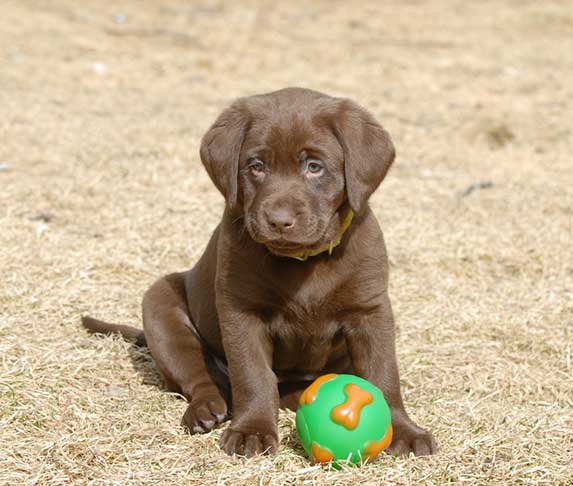 Your dog may be possessive with the ball if he holds on to the ball for too long and runs away from you if he thinks you will take the ball.

Also, if he growls as you when approaching, the dog may consider the ball to be very valuable, and this is obsessive behavior.

2. There Is a Fixation When You Bring Out A Ball

Another sign that your dog might be ball obsessed is if your dog becomes fixated and you can’t get their attention away from staring at the ball.

3. If There is Anxiety

If your dog begins to show signs of anxiety, such as vocalizing and whining, he may become excessively obsessed with the ball.

Why Do Dogs Get Attracted to Me? (9 Reasons)

Tips For Breaking the Obsession with The Ball

Your pet loves restrictions and rules.

When playing fetch, it’s your responsibility to set limits on acceptable behavior.

1. Build Your Dogs Inclination Around Balls

If your dog is obsessed with balls, you will have to develop better tendencies around balls.

The way you can begin to reduce your dog’s drive around balls is simply to ask your dog to lie down and not touch the balls.

Whenever he does it right, give him what he wants, which are the balls, and play with him. Always reward his efforts.

2. Learn To Know When Your Dog Is Becoming Obsessive

Look for the physical signs of dog obsession in your Labrador and correct it in the initial stage before the obsession takes hold.

Take your dog for a walk before playing ball — this will help dissipate any pent-up energy and let him play in a less excited state.

3. Teach Your Dog to Know When the Game Is Over

When you understand that your dog ​​is obsessed with balls, an easy way to deal with the problem is to teach your dog when the game is over.

To prevent your dog from assuming that you will take the ball, when every time you call him, teach him a command that means “this activity is over.”

You can teach him this simply by saying, “all done.”

When you want to leave, show him a treat or gift and give it when he gives you the ball.

Do this consistently over a long period and your dog will soon understand that when you say “all done” — it means the activity is over.

4. Calm The Dog Before Throwing the Ball 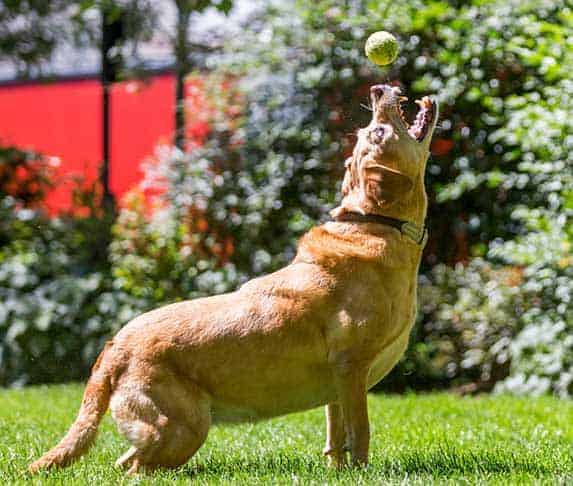 Get him to sit and make eye contact with you.

Reward him by throwing the ball.

5. Use the Ball As an Outlet of Energy

Once your dog clearly understands the rules of the game, a good way to use the balls your dog likes is as an outlet for your dog to dissipate energy.

With a ball chucker, you could throw the ball three times as much as you would with your hand and give your dog more activity in less time.

Another cool benefit is that you do not have to bend over to pick up the ball.

If your dog is obsessed with a particular ball, mix it up. In between toss, try a different type of ball.

This will help prevent the ball obsession of your dog.

8. Make the Ball a Reward

If your dog loves balls, it means you can use the balls as a reward for behaving well, such as sitting politely.

The idea here is to use what your dog likes as a reward for the right behavior and not bad.

For example, let your dog jumps on you, then release the ball to him.

Your dog will soon learn to jump on you each time he wants to play.

Ball obsessive behavior among Labradors is more common than you think.

The problem is that most owners are not aware of spotting these signs and giving their dogs the help they need.

If you realize your dog ​​is obsessed with balls, don’t worry.

It just lets you know that you have to work on their tendencies and obedience around the ball.

Arousal to the ball is a relatively minor problem when viewed on the obsessive-compulsive spectrum.

However, you still have to put an end to it.

Teaching your dog to look beyond the ball and focus on the world around him ensures that he can stay safe while having fun.