You might have heard the term “small dogs barking at big dogs”.

But what does it mean?

Well, in this article, we’ll take a look into the meaning behind it and the reason behind small dogs’ behavior towards bigger dogs.

Here are some reasons why small dog bark on seeing big dogs.

Small dogs can be nervous around big dogs, especially if they have never been exposed to them.

A small dog may bark at a stranger, but it may also bark when it sees a large dog.

This is because he has never seen a large dog before and does not know how to react to it.

He does not know whether the large dog will attack him or not.

When you have a small dog that barks at a big dog, it is because he feels threatened by the bigger one.

He may feel that the big dog might want to hurt him or eat him up.

This is why he starts barking at the bigger animal in an attempt to scare him off so that he would leave him alone.

They want to protect their owner

If your small dog barks whenever he sees another dog nearby, then he’s probably barking out of concern for his owner’s safety.

He may think that if he barks enough times then you’ll realize how threatened you are by the other dog and take action by moving away or running away.

When your small dog barks at another animal, it could be because he is curious about it and wants to see what type of creature it is and how it looks up close and personal instead of just seeing them from afar like most animals do when they come across each other while roaming in their natural habitats such as forests or grasslands with no fences separating them.

They just want to play

The most common reason why small dogs bark at big dogs is because they want to play.

Smaller dogs see larger dogs as playmates and are excited when they see them.

This can lead to barking, which is how the two animals communicate with one another.

Can a Puppy Swim In a Pool? 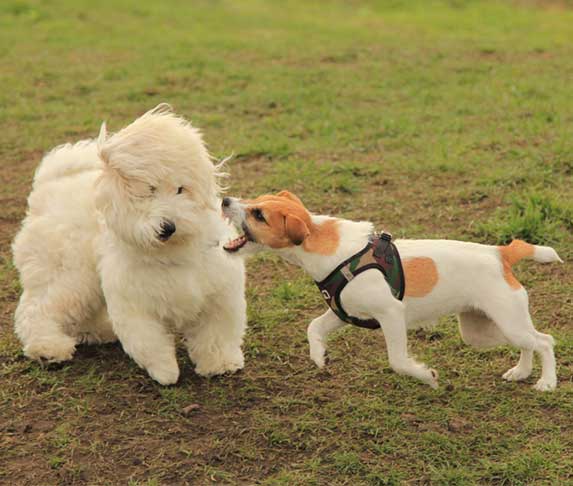 Smaller dogs tend to be more active than bigger dogs, which might explain why small dogs seem like they’re always barking.

They need a lot of exercises, which can get your attention — and make you want to give them a treat or pet them — so they’ll be quiet again.

How to Use Socialization to Minimize Barking?

If your dog barks too much, socialization is one of the best ways to minimize barking.

Socialization is the process of introducing your dog to people and other animals in a positive atmosphere.

This allows them to learn how to interact with others in safe situations, reducing their stress level and helping them be more comfortable around new people and pets.

Socialization can be done by enrolling your dog in classes or taking them out on walks around the neighborhood.

You can also practice socializing at home by having visitors over and introducing your dog to them slowly so they become familiar with each person’s scent.

If you have a puppy, it’s important that you get started right away with socialization training so they become comfortable around people and other animals while they are young.

In the end, small dogs don’t bark at big dogs because they’re trying to warn you of their impending doom.

Hopefully, we’ve dispelled the mystery behind barking little dogs, so you can all better understand your pup’s behavior!