Dog howls have been cemented from ages past as one of their communication methods with owners like you.

The reason or message they try to convey from howls may not be pinpointed, but the body language associated with it gives you a clear and proper context.

However, howling is one thing, but dogs howling in the chorus is another. It can be because of many reasons such as conferencing with other dogs, territorial calls, and more.

This article will illuminate why your dog joins in howling with other dogs in the neighborhood or why others join your dog when it begins the howling extravaganza. 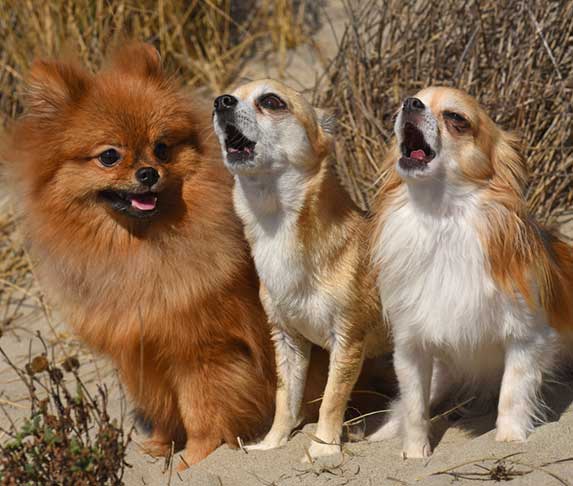 Like humans going on conference calls with their office mates or having an online get-together with friends, dogs have their unique way of doing this as well.

They do it by howling.

It is perhaps the most known reason behind howling; it is their communication method with other dogs.

The words behind their howls may not be apparent to humans, but they understand among themselves what it means, and others howl express their replies.

Another reason behind this is that dogs have a hardwired instinct inherited from their wolf ancestors.

Wolves use their howls to signal pack members so they can find their way home.

Although domesticated dogs are not in an actual pack, they view their family as the pack.

So, their howling may indicate their displeasure from not being isolated from the family.

Other dogs might join in instinctively, being naturally part-wolves in their bloodline.

Dogs are territorial beings, and they are very particular when it comes to boundaries.

Therefore, to alert other dogs to what is rightfully their area of rulership and autonomy.

One of the methods they assert is through howling.

Howling helps them publicly declare “this is my spot” to the dogs within the vicinity.

Others may join in the howling spree to equally claim their ownership of their respective turfs.

Why Do Dogs Curl Their Tails? (Tails Up & Under)

4. The natural response to external stimuli

Although there can be inferences to what dogs mean every time they howl in chorus, one of the lesser-known but apparent reasons is their natural response to external stimuli.

Notice how dogs howl every time that fire truck goes by?

Or when an ambulance comes speeding through the highway?

How about when you play your favorite song from Spotify?

Or every morning when your alarm blares..?

Howling may be their natural response to specific sound ranges.

And howling with other dogs fits this description. 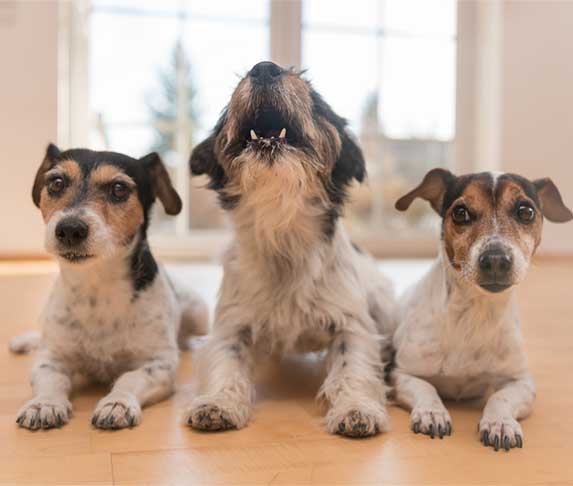 Dogs are pack animals, just like their wolf ancestors, aside from the howl serving as a beacon to indicate their location.

It can also be an avenue to express their desire for the companionship of other potential pack members.

Their howls in chorus might be a public sentiment shared by the dogs within the vicinity.

In addition to this, howling can be a way of saying, “I am here, where are you?” every time they get separated from their pack.

It is primarily observed from stray dogs banded with a pack of other strays.

6. To indicate their alertness

One way howling is used by dogs is to let other dogs know that they are alive, awake, kicking, and ready to defend their owners’ house.

Dogs are known for their impeccable alertness and house-guarding skills.

Howling is mainly heard in the nighttime and seldom during the day.

It is because dogs are less active when the sun is still perched up high.

However, their nature allows them to be alert and keep watch at night.

When dogs howl, it can be to inform other dogs that they are alert, much like the saying “present” when the teacher calls for attendance.

In conjunction with number 6, howling is also a distress signal to keep potential intruders away.

Dogs howl in chorus to inform intruders that they are in for a long night of biting if they ever step foot in one of the houses guarded with dogs.

8. Protestation of their current state

A howl is also used to express their protest of the state they are currently in.

Most of the time observed among dogs that are left outside or left alone during the night.

It is only natural for them to go on a howling protest because who wants to be left in isolation?

Other dogs might join in expressing their displeasure or in conveying their sympathy towards their struggling brother or be there for each other.

Howling may be a way to communicate with their owners or other dogs if they discover something notable.

Dogs were initially used in hunting games alongside their owners before their domestication as house pets.

The same instinct might still be carried over today, and they can exhibit their excitement by howling in hopes of appreciation from their owners or even other dogs.

What Breeds Are Most Likely to Howl?

Although howling is a standard communicative tool used by dogs, some breeds are more inclined to practice, while others might be reluctant.

The list below features the breeds that are more inclined to howl:

Age will also come into play to the frequency of their howling.

With age comes the impairment of the hearing, vision, and altered consciousness among dogs which may trigger more howls than usual.

More often, howling is in response to external stimuli like noises and other dogs.

In this case, training is not necessary.

However, there are instances when your dog is the culprit that incites the community’s dogs to have a howling chorus at night.

It is when you should step in. Try to reinforce the behavior positively only.

For example, giving treats and attention each time, they refrain from howling.

The reason behind the howling chorale cannot be pinpointed explicitly as the behavior depends on the social context now.

But one can infer that it is a coping mechanism by dogs to communicate and express their sentiments.

And others joining them is a form of inherent unity among dogs.