The playful side of your dog may not always be on the pleasant side of things.

How many times have you heard people yelling at their dogs to not do something potentially harmful?

Lunging at passing cars is one of those dangerous things that dogs do.

But what makes dogs lunge at passing cars and risk their lives in the process?

One primary reason that they do this is just that it’s their nature. They just love chasing things. It’s just part of their playful nature. Any moving object is a potential target to be lunged at!

This also presents one of the tactics that they use to mark their territory. They perceive moving objects such as cars to have the intention of invading their space.

Lunging at cars is a pretty dangerous thing to do — Your dog may get hit or get “flattened” into obscurity!

It is a tricky situation actually because chasing after them will also make the situation more dangerous.

This article shall highlight some of the factors that may motivate your dog to lunge at and chase cars.

We shall also touch on some things you ought to do should you find yourself in such a situation.

Below are the reasons why dogs lunge at passing cars.

1. Their Predatory Instincts May Be at Play 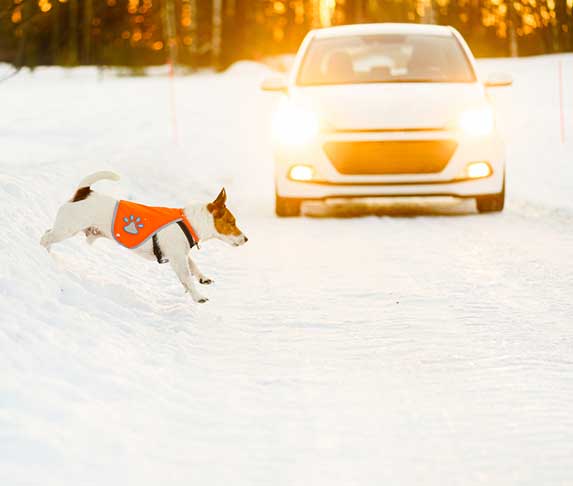 Dogs have predatory solid instincts — This is one of the most common features of canines.

This is usually seen when they chase cats or mice.

It is the same way they perceive a car — They view it as a target.

They are so used to chasing down their prey that they consider moving cars to be prey as well.

Though they don’t know the risks, they may be hit or run over and get killed.

2. They Are Trying to Mark Their Territory

By lunging at cars, they are aiming to mark their territory.

Dogs somehow see cars just like some of the rest of the things that surround them, potential intruders!

Usually, it will do this with cats or other people they perceive as strangers to their eyes.

When they see a car moving near them, their minds instantly see an intruder.

This will make them lunge at a vehicle and also chase it down.

3. It Is Just Them Being Their Playful Selves

Sometimes, you ought not to read too much into your dog lunging at a passing car.

This may just be a simple case of them being too playful.

To them, the moving car is another object to chase.

They see it as any other toy that they come across in the house.

The same way you would play “fetch” with them is the same way they wish to play with the passing car.

Why Does My Dog Muzzle Punch Me? (6 Possible Reasons)

4. They Find It Exciting

Do you know how we humans get when we are excited?

Our reactions vary, but we tend to be lively.

Our dogs tend to get all crazy as well.

Lunging at cars and chasing after them is one of the reactions you should expect when super excited.

5. They May Just Be Bored

If your dog gets bored, it may also tend to get a little bit naughty.

This is one of the mischievous activities that they can engage in.

They can scare you a lot when they engage in this kind of dangerous activity.

What they consider as a way of killing boredom may be a very hair-raising experience for you.

This is because lunging at a car may result in a tragedy-either a severe injury or the death of your dog!

6. It Is a Result of Reinforced Behavior 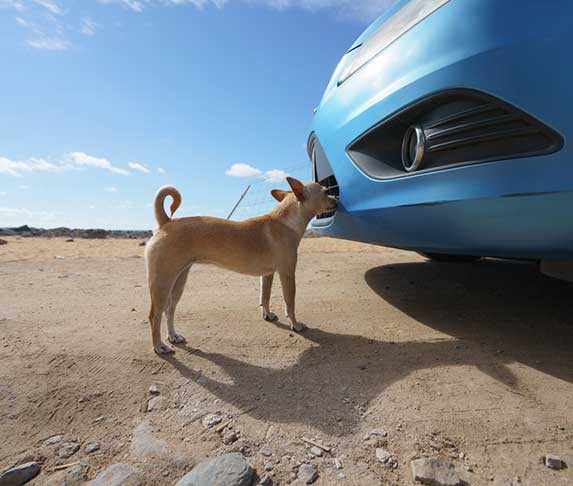 Lunging at cars and chasing them down is also attributed to the concept of reinforcement.

What does this mean?

This just means that the behavior of lunging at a car seems a natural thing for them to do because they have done it over and over again over time.

Therefore, if they have done it before, they will repeatedly do it whenever they get the chance to do it.

7. It Is a Way of Displaying Their Aggressiveness

Your dog may also lunge at a car just to show you and those around that he or she can be a “macho”.

They may use this opportunity to show that they do not get scared quickly.

This situation can be used by your pup can try to chest thump a little bit.

8. You May Be Too Lenient with Your Dog

Oftentimes, the naughty behavior of your dog goes to show that you enable this behavior.

At times, the case of a “lunging dog” should be blamed squarely on you.

If they picked and developed this behavior, it is because you have let them.

If you show them that you do not want this behavior to continue, they would have stopped.

You should try to be strict with your dog. This will help you to stamp your authority.

In addition, the dog will be more likely to follow your orders to stop lunging at a car if you show that you are serious about wanting them to stop.

9. Your Dog May Be Becoming a “Hard Head”

A little opposition from your dog may show that he or she may possess attributes of an alpha creature.

However, too much of it should worry you.

This is because this indicates that you have a dog that is running out of control.

Lunging at cars, barking at them, and chasing them after them even after you order them to stop should worry you.

This may show that your adorable pet may slowly be transforming into a hard-headed creature.

Lunging at cars and chasing after them is a common reaction in dogs.

This behavior can be attributed to many things.

However, no matter what causes it, it is a dangerous habit that should be discouraged by all means.