Have you ever wondered why after a long walk together in the park, your dog decides to roll on dead insects?

More importantly, how can you prevent behavior?

Almost every pet owner is familiar with this behavior.

Is it a behavior used by their predecessors when hunting for prey?

Or do they love the smell?

Scientists do not know with certainty why dogs behave this way, but there are theories of it being an instinct.

The most popular theory is that they inherited this trait from the wolf — their ancestor.

The wolf rolls on dead insects to camouflage their natural smell.

This act of hiding their odor helped wolves get closer to their prey without being noticed, making them better hunters.

The most acceptable reason for dogs rolling on dead insects is that they are hiding their smell. Some experts also confirm that dogs roll in dead insects to collect odor to return to the other dogs, and it communicates that there is potential food in the area.

To fully answer this question, we shall explore additional reasons why dogs roll on dead insects in this article. Let’s dig in.

Here are the reasons why some dogs roll on dead insects: 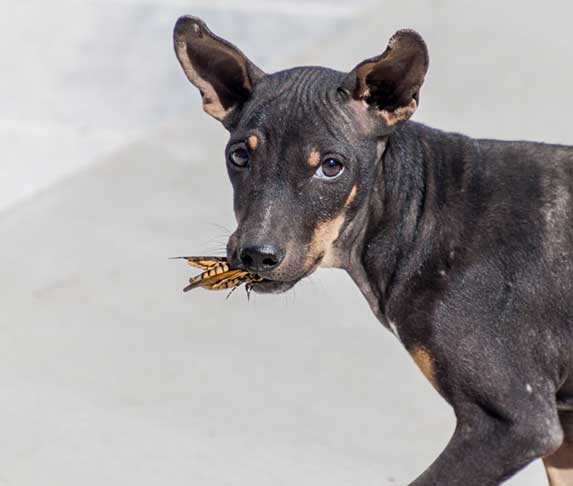 The theory is that your dog is boasting to other dogs that he has found something good nearby.

This is expressed by rolling on the insects and carrying the smell to let other dogs know about it.

2. A Sense of Community

Wolves and dogs have been observed to roll on dead insects which is believed to be a behavior linked with unity or group cohesion.

Just the same way teams put on uniforms, this is the same idea — but at the level of canines.

3. They Enjoy the Smell

The least important reason for dogs rolling on dead insects and other gross things is simply because they enjoy it.

Our likes, senses, and dislikes are quite different from dogs, and sometimes we just have to accept that they might really enjoy the smell that we consider foul.

The differences of things we enjoy can be likened to human beings spraying on perfume whose scent your dog does not like.

Why Does My Dog Open Doors? + How to Calm Them

Another theory believes that dogs roll on dead insects to claim that they killed them.

It is also a sign for other dogs to stay away from his prize or respect him for the act.

Therefore, the dog may think he needs this smell to boost his reputation in the neighborhood and impress the biggest and most powerful dogs he may find.

5. To Hide Their Smell

To a large extent, the most common reason for dogs rolling in dead insects, even in more awful things such as animal carcasses and feces, is because they are hiding their smell.

In theory, they do so to prevent predators from finding them, an instinct that was transferred directly from their wolf ancestors.

However, some doubt this theory because the wolves are predators and are at the top of the food chain.

Usually, they do not worry about other predators unless they are sick or abandoned by the pack.

That is when they would also roll on dead insects to protect themselves. 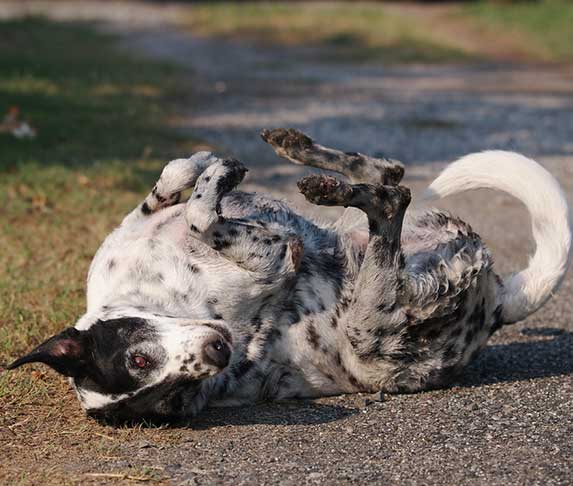 Sometimes, dogs will roll on dead insects to eliminate another strong smell.

These will often be cosmetic products, especially those that have a strong odor.

These are likely to scent from his grooming session.

Also, if the skin of your dog is red or he keeps scratching, he may have burns or sensitivity to grooming products.

He will therefore roll after a grooming session due to skin irritation.

7. A form of Data Collection

Some experts believe that dogs roll in things like dead insects or rotting carcasses to collect odor to take to the pack.

It is the equivalent of people who take field observations to return to base for analysis.

Since wolves and wild dogs live in groups, they share their resources among themselves.

If a dog finds something interesting and wants to alert the others, an easy way to achieve this is to cover itself with it.

8. As a Means of Communication

As you may know, dogs sniff each other, not only for greeting only but also to learn information about others.

Thus, your dog is saying, “I have news to share! There is something dead close by.”

Finally, rolling on dead insects could mean, “Look at me, don’t I smell great?

Remember that to a dog, the smell could be the best.

It will therefore want to show its pack how nice it smells, unlike them.

What To Do When Your Dog Rolls on Dead Insects?

1. Firstly, remember that rolling on dead insects is normal and natural behavior of dogs, regardless of how the outcome may affect you.

If your dog’s behavior gives you concern, it is often helpful to understand the reason that led to the behavior.

Understanding the genesis of the behavior is a good starting point to determine its best modification.

Remember, he does not do it to make you feel bad, it’s part of his instincts.

2. Secondly, despite the instinctual behavior, this does not mean that you have to live with a smelly dog.

Although you should not punish your dog with this behavior, you can take steps to discourage it.

You can also try to disrupt the pattern with an annoying action to your dog, such as a sudden and loud noise.

The key here is to be consistent and start the “discomfort” once the rolling begins.

Once he starts to associate rolling around in smelly things with the unpleasant experience, this behavior is likely to stop quickly.

Dogs are a daily part of our lives. It’s easy to forget they evolved from wild wolves.

They are often led by instincts that once served an important purpose in the wild.

Keep this in mind the next time your dog does something less than ideal.

It will help you understand his motives and may give you more patience with your puppy.