We know that dogs have an unrivaled sense of smell.

As much as we consider them as adorable pets, they are amazing!

Scientists are claiming that their scent is more than a hundred times more sensitive than humans.

According to Nova, dogs possess 300 million smell receivers in their noses, which is comparatively higher than the meager 3 million humans have.

Because of this vast difference in the sense of smell, sometimes we wonder why our pet dogs roll on smelly things like a puddle of piss?

If we cannot tolerate even touching our urine, how can they if their smell is more sensitive than ours?

Well, read on to find out.

Why Does My Dog Roll on Its Urine? 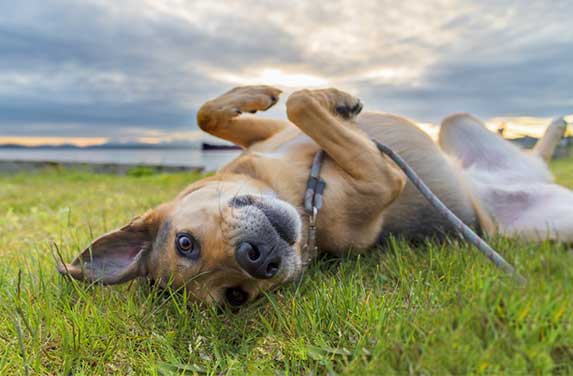 You may sometimes notice your canine friend turn over a puddle of urine, a trash can, or roadkill on the sidewalk.

And it makes you wonder if they just feel like doing it.

Does your dog prefer the foul scent, or are other reasons exist why this habit occurs?

Well, one thing we can assure is that this is not mindless behavior.

It is just like how cats love hard surfaces — There are reasons for this bizarre behavior.

Some of them are:

1. They are attempting to mask their owner’s smell

Stanley Coren, a seasoned psychologist, and dog expert and author of several books about the way dogs behave claims that they roll around smelly stuff like piss to cover up their scents and repel the smell of their owners.

Dogs prefer the natural bodily smell that they innately have.

Much like cat rubbing, some behavioralists suggest that your dog rolls onto disgusting things to mask the smell they received from the owner’s contact.

Additionally, when dogs roll about on a puddle of piss, they indicate that they want to leave their scent.

2. It is an instrument of communication

Rolling onto smelly stuff is another way to express what your dog wants to convey to other dogs.

Dogs like to roll up on the unlikeliest of surfaces, such as a smelly puddle of piss, and that is one method to carry a message about what they find to others.

However, these rolling behaviors are not just about smells of piss.

Many studies show that dogs would roll on a surface with smells that interest them, like the scent of fish as much as they want, just like with their pee.

Are Wax Melts Safe to Use Around Dogs?

3. It is an indication of active brain activity

The dog’s brain and nose have a strong A stinky smell activates a dog’s olfactory lobe, and it also acts on the motor segment of the brain.

It sends a message that advises your dog to perform motor activities and act upon stimuli.

4. It is the norm for all dogs

Alternatively, maybe the only reason dogs roll on pee is that it is the norm in most of their canine pals.

Most people can wear flashy clothing or unpleasant perfume for the same purpose.

Rolling on pee, to dogs, is typical and not a weird thing.

Knowing that there are actual reasons behind this bizarre rolling-in-pee phenomenon that most dogs love to do, do not blow your gasket on it.

Just be a good owner and give your dog a fabulous bath after. And maybe yourself as well!