Dogs throw up for various reasons but for the breed Great Danes, it can be for one or more of many reasons from normal to an emergency.

To figure out which it could be, here are nine reasons your Great Dane could be throwing up.

1. It Could Be Regurgitation

It is important to know the difference between regurgitation and vomiting as they are two different things.

An irritation, blockage, or any negative interaction can cause the abdominal muscles to force the food back up the digestive tract and out the mouth.

What comes out should be partially digested or have stomach fluids.

Regurgitation is just from the esophagus as the food has not made its way to the stomach yet.

2. They Are Eating Too Fast 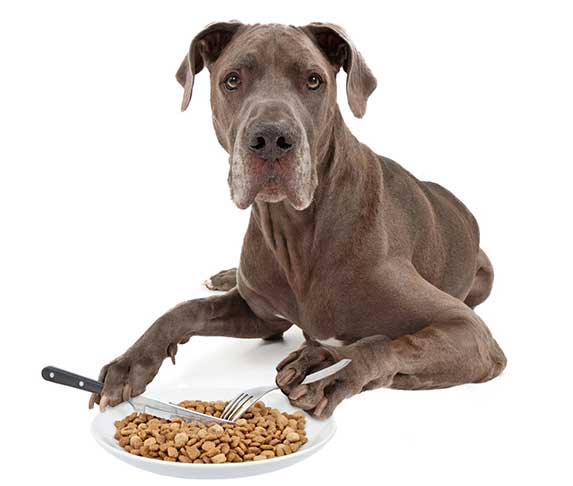 It seems to be a problem most dog owners have seen, especially owners with dogs who eat too fast.

Some minutes after eating, the dog throws up most of its food and goes about its business as nothing happened.

This can be caused by insufficient chewing of the food or just stomach sensitivity to hard food bits.

For this, you would need to get your dog to slow down their eating with special bowls that make them work for the food, eat in smaller portions or force them to chew.

These can go hand in hand with giving your dog softer food or switching to home-cooked meals.

3. They Get Active After Meals

This is one reported cause of vomiting. The movement disrupts the flow of food in the digestive tract and can upset the stomach.

Your dog getting hyper after a meal can stop, vomit, then keep on going about its activity.

Restricting activity before or after meals is one piece of advice that other dog owners, and specifically Great Dane Owners, say helps a lot.

Just about thirty minutes of sitting still after mealtimes make all the difference.

4. They Ate Something They Are Not Supposed To Eat

Great Danes are big dogs with big appetites, as much as it is important to give them enough food, they tend to dig through trash and eat anything they can.

It is important to keep them away from the trash in case they ingest something dangerous like an undigestible object or a protruding object.

Your Great Dane can throw up what they eat and feel better once it is out of their system.

5. They Ate From Your Plate

If your dog is not trained or is extremely playful, they could sneak a bite or two from any human food left lying around unattended.

Not all human food can be consumed by dogs, and it is because of their restricted diet vomiting could be prompted.

If they eat foods, like chocolate or raisins, they are allergic to, they can vomit as a symptom of poisoning.

If you suspect this is the case, you would need advice from a veterinarian.

In this case, it pays to not leave any food unattended when your dog is in the same room with you.

Vomiting is induced to remove foreign bodies but if the foreign body is not dislodged, vomiting may be continuous.

If this is the case, a veterinarian is needed because it could be an obstruction.

And if it is not taken care of as soon as possible Great Danes and other deep-chested dogs are susceptible to inverting their stomachs due to violent vomiting; a condition known as gastric dilation volvulus GDV or Bloat.

Surgery will be needed if this is the case.

The dangers of indiscriminate eating might include obstruction, but they also include overeating.

Bloating in dogs due to overeating is life-threatening.

As food is digested in the stomach, gas is produced and the stomach extends causing bloating.

This can happen very fast and within hours, it can be fatal.

So, it is important to catch it in time with the symptom of vomiting white foam, a distended and hard stomach, and other symptoms to look out for.

But with these two you should call your veterinarian for emergent care.

A Great Dane not used to being in a car or even on sea or any sudden motion can trigger vomiting, even if your dog is in good health.

Motion sickness can also be brought on by your dog feeling queasy beforehand.

Motion sickness should be temporary and the dog should get rest, water, and food when the vomiting stops.

If the vomiting does not cease, you should watch your dog and see if any other symptoms are manifesting. 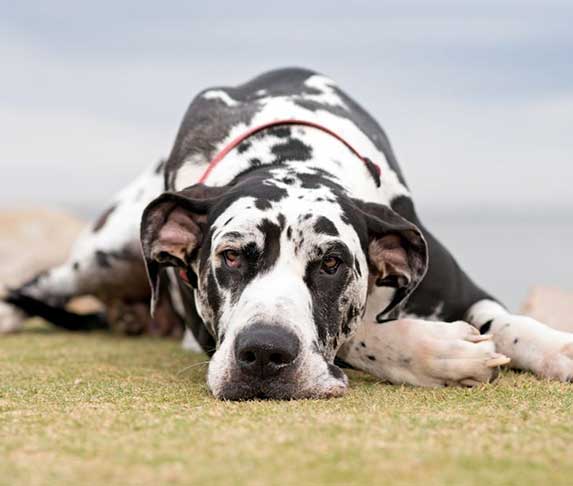 Dogs can feel anxiety too.

When stressed their stomach muscles can contract and force their food up.

This is especially noticeable in rescue dogs who are in a new environment, which can make them feel stressed.

This can go on its own as the dog becomes more familiar with you and its environment.

But all the same, it is best to keep your veterinarian updated on any progress so you do not miss anything.

It would also help to figure out if a physical thing or action is causing the stress so you can stop the trigger.

It could be any of these nine points or it could be that your dog is sick from infection from:

This will depend on what kind of vomit it is, how frequently it happens, and what other symptom(s) accompanies the vomiting.

You know your doggo, so you can notice any changes or any anomalies with their vomit and let your Veterinarian know.

For Great Danes, vets should be on a speed dial as they and other broad-chested dogs are susceptible to Gastric Torsions.