Sugar gliders are such cute creatures because of their tiny bodies but fluffy furs!

But another thing that makes these critters adorable is the sounds they make.

Have you heard a sugar glider make certain sounds? Have you wondered what they mean?

Sugar Gliders can make many noises, ranging from soft chirps and hisses to loud grunts and barks.

What Does Sugar Glider Sounds Mean?

Here are some interpretations of their unique language!

It is the noise that sugar gliders make when they are not feeling well or have eaten something wrong.

Different from coughing, it sounds more like a seal making noises underwater because of how wet it is! It can mean diarrhea, parasites, etc.

But no need to worry if one of your pets barfs. Just take care of them by cleaning up their mess and keeping them hydrated with Pedialyte until they feel better.

You might want to consider taking them to the vet afterward, though, for a check-up in case they ingested anything serious. 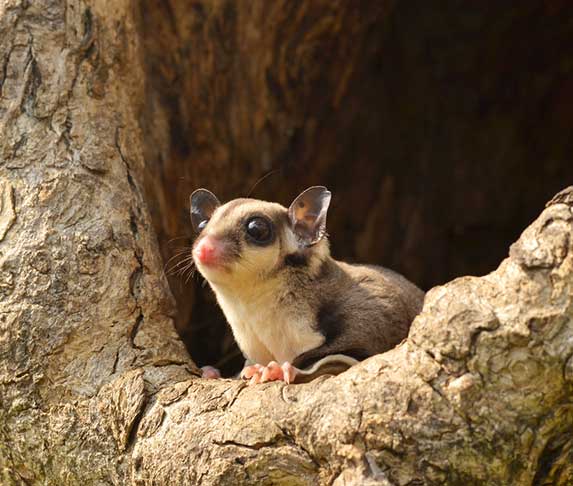 They usually happen when they are sleeping or lying contentedly on your shoulder.

Some have been known to chirp when being fed or when cuddling.

Chirping can sometimes be a precursor to bark if the noise is loud and lasts for a couple of seconds in length.

Another type of chirping noise that sugar gliders may make is high-pitched, usually just before falling asleep.

This noise sounds almost bird-like! I have noticed that it happens right when the sugar glider’s head hits the pouch floor while he sleeps. It sounds like two different pitches, kind of like one goes “dee” while the other goes “doo.”

One last type of chirping noise is made by male sugar gliders who are courting females.

These chirping noises usually sound like “tseep tseep tseep” and are very quiet. This type of chirping is also one of the few times males can be heard calling unless they attract female attention outside their cage.

Barking sounds indicate that your glider is stressed or threatened in some way.

They often happen when you handle them too much or unexpectedly change their environment in some way.

You may hear them barking when you first open their cage door in the morning, for example, if they were not expecting it.

Sugar Gliders bark to warn other sugar gliders about danger in the wild too! There tend to be more barks during breeding season as well.

Sugar Gliders usually only bark when threatened or defending themselves.

However, it can be noisy and intimidating. It sounds similar to a small dog barking and can scare you if you’ve never heard it in person before.

It is the most defensive noise that a sugar glider can make — It means ” BACK OFF!” or “DANGER! DON’T COME NEAR ME!”.

The hiss with air comes from the nostrils and can be very scary to hear if you are not expecting it.

This hissing noise must be taken seriously, as another aggressive body language can also accompany it.

When you pet your sugar glider, and they start chitter-chattering, it means they are excited, probably about something good like dinner or playtime.

It can also be a form of affection, so if your sugar glider does it to you while he’s nestled in your shirt, give him a gentle pat, and enjoy it!

Chitter-chattering is often confused with the purring noise that some sugar gliders make.

However, chirping is much softer than purring, which tends to sound like an excited ca-chaw!

If your sugar glider is making this noise when they are not playing or getting attention from you, then maybe something else happened that upset them.

Chattering is never an aggressive noise, but purring can mean that they are feeling defensive.

So make sure there isn’t something behind you! 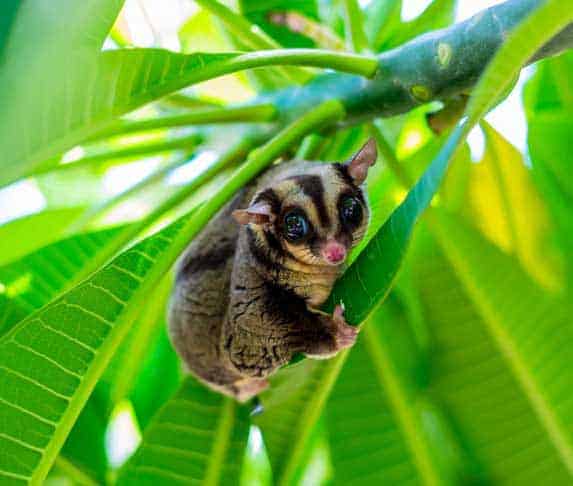 It is the sound of a male sugar glider looking for a mate or an excited male shouting out to another glider.

It’s one of the few times that sugar gliders are loud outside their nesting area.

It usually sounds like a weird grunt, but sometimes it can be more high-pitched and sound almost bird-like.

Hissing is probably the most misunderstood noise, at least by me!

When you first read about this noise, you may want to skip over it because it just sounds so scary.

But I assure you that hissing means something very different than what people expect!

Sugar gliders don’t have any natural way to defend themselves against other animals in the wild, so they developed the ability to release a strong scent from glands on their hips when threatened or agitated.

Wheeking is described as sounding like a squeaky toy.

These noises are made by females in estrus (in heat) and can be heard over great distances.

Other times, it results from a successful courtship between a couple or when they want their owner to come to look at something.

They sound very high-pitched and make a long, drawn-out noise that lasts about two seconds.

It is the sound they make when they are nursing comfortably on their mother’s nipple, it sounds like tiny chirping birds!

Sugar gliders have made this noise while cuddling with their owners too.

It is very soothing to hear, and it almost makes you want to start lactating just so your pets can enjoy these cute noises!

It’s sort of funny because some sugar gliders will often vocalize his satisfaction at being fed after each suckle by making this pretty chirping sound.

We hope this article helped explain some things about what your pet sugar glider might be trying to tell you.

If your pet glider is sick or injured, take them to the vet immediately!

You can also send suggestions for other topics that would benefit from an article like this one.