Some dogs can be just as quiet as some people.

Silently enjoying life with not much need to verbally communicate, while others can be very loud chatterboxes.

Barking in dogs can be cute for some time.

Especially when one understands it’s perhaps one of their best ways to communicate with us, as people put so much emphasis on speaking verbally.

After a certain amount of time though, one can wonder (especially in the dogs who seem to can’t stop), does all of that barking hurt a dog’s throat?

In short, yes, too much barking can be dangerous for a dog’s throat, but only after an extended amount of time. What’s more important to know, however, is figuring out why your dog barks, the potential reasons for such, and how to make it stop when it’s clear that it’s become an issue.

Being equipped with that knowledge puts you in a stronger position to take care of your pet.

Why Do Dogs Bark? 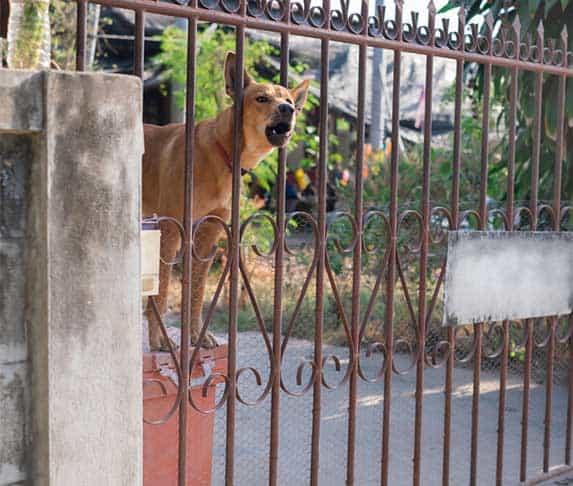 Dogs are so often compared to their close cousin, the wolf.

But it’s not all that often when one looks at their more obvious differences, that being barking.

It may be a strange realization, but it’s a rare occurrence to see a wolf bark.

And while they’re certainly not silent, it’s clear they don’t put as much weight on the form of communication as dogs do.

It all has to do with the way that either species has evolved.

Wolves are hunters, meaning that stealth is their greatest strength.

And due to barking’s volume, it just wouldn’t be viable for their species to fully adopt.

Dogs, on the other hand, don’t have much need to be stealthy and quiet oppositely need ways to communicate.

Barking is not only a way for our pets to communicate with us, but it’s also been proven to be a way for them to talk with other dogs.

While some may dismiss it as nonsense, there is actually a level of complexity that goes into it.

Dogs can adjust the tone, pitch, and frequency of their barks to relay certain kinds of messages.

Even owners who’ve heard their dogs bark quite frequently should be able to tell which barks are happy or bad.

Will A Dog Tie If Not In Heat? (What Dog Owners Says)

Why Is My Dog Barking?

As stated before, dogs bark as a means of communication, so there can be any number of reasons your pet may be trying to get your attention.

The best case for this happening is simply because your dog is happy and wants to express it, or it may be trying to initiate playtime with you.

This can be cute or adorable for some time but letting this go on for too long may develop some bad behavior in your dog.

Similar to how a child might learn they can get anything they want just by crying very loud.

In harder situations, your dog could be barking because of fear or due to the fact that they’re in pain somewhere.

Dogs with anxiety could simply be barking as an uncontrollable reaction or as a way to distract themselves from their fear.

Our pets aren’t able to fully tell us when they’re in pain, or even where they’re hurting.

Some may reach out with barks, just as a way to alert their owner that something is wrong.

Other dogs just have it in their genes to bark, it’s a natural action for them that they’re most likely not even aware or conscious of.

Does Barking Hurt A Dog’s Throat? 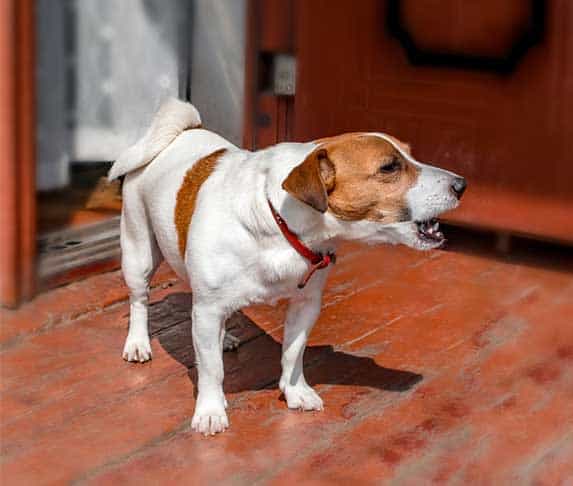 Barking is not inherently wrong for a dog to do.

But an owner should be able to tell the difference between an innocent, attention-seeking bark, or a dangerous one.

If your pet continues barking with no end in sight, then it’s safe to assume that there is a problem afflicting your dog that should be addressed.

Either that or if your dog has picked up a bad habit around barking, it might continuously do so hoping to get whatever it wants.

Both situations should not be allowed to continue, if they do, there is the possibility that it might end up hurting your pet.

Barking for an extended amount of time could lead to your dog developing laryngitis, a harmful condition affecting the throat.

This condition leads to an inflammation of the larynx, which can be quite painful for your pet, just as much as it is for people.

It could take up to a week for this to fully heal, which might take longer if the actual barking problem is not addressed.

Barking could be therapeutic for some dogs, so they may continue to do so despite the pain.

The best way to avoid this situation is to find out why your pet is barking in the first place.

How To Stop Your Dog From Barking Too Much?

The key phrase here is: too much.

No one should expect a completely silent dog unless their pet has already proven otherwise.

The first response an owner should have upon hearing their dog bark is to determine what kind it is.

If it’s a happy bark of a dog just wanting some attention, then it’s not an immediate cause of concern.

If the bark is a fearful one, then it’s best to put aside what you’re doing to help your pet.

Either way, the next response should be to implement training or find the cause of concern.

To train your dog, it’s best to choose a word (quiet) for example to associate with when they’re barking.

When your dog hears the word, and it’s not a fearful bark, perhaps wait until they’re quiet to give them attention.

After repeating this, your dog should hopefully learn that being noisy will not get them the love they’re looking for and that the word is an indication that they are being noticed, but won’t receive what they want until they behave.

At times, seeing a trainer or a vet could be useful (or necessary) as well.

A noisy dog could be an endearing trait for some pets, as it’s one of the best ways for our dogs to truly communicate with us.

Just as anything else, however, too much of something could eventually turn bad.

No owner wants to see their dog in pain, but barking to an excessive degree can lead to just that.

Understanding your dog and its triggers is an excellent way to help keep your pet even just a little safer.