He is a Napoleonic cat who speaks fluent Persian.

The Napoleon munchkin cat is not only adorable, but he is very rare too.

Here is everything you need to know about the Minuet cat and whether he is a good fit for you.

The Napoleon cat is a mix between the Persian and Munchkin cat. This cat is loved for his friendly, gentle, and affectionate nature. Also called a Minuet cat, the Napoleon Munchkin gets his name after the 19th-century Wizard of Oz storybook.

While other cats are products of cat breeders, he is a product of a dog breeder named Joseph Smith.

Around 1995, Smith was looking for a beautiful cat with the bone structure of a Persian cat and the physical appearance of a munchkin cat.

The result was a longhaired cute feline with quite short legs.

Every cat lover who saw him almost thought he was a Dachshund.

That is how the Minuet cat earned the nickname “the Sausage Cat”.

The Munchkin short-legged cat mixed with the Persian Longhaired birthed the Persian Minuet cat that we see and adore today.

And if you are wondering why the Napoleon name, he gets it from the famous Napoleon Bonaparte who was equally short like him. 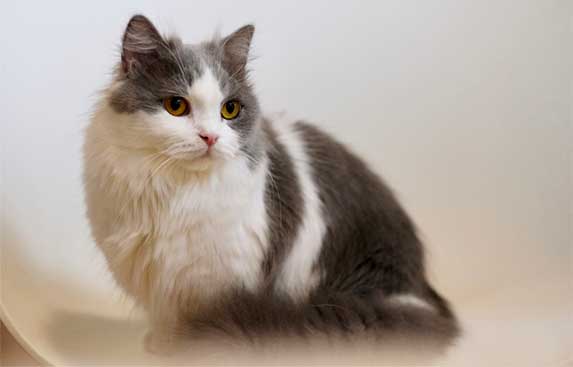 Born of two exotic breeds, there are numerous variations of how the Napoleon cat litter will look like.

Minuet kittens may have the short thick legs of a munchkin (bull’s eye!) or the long hairy legs of the Persian cat (still adorable).

Most Napoleon munchkin kittens adopt the round face of the Persian cat.

The face, cheeks, muzzle, and ears will all have a circular profile.

Height-wise, a Minuet cat grows no more than 20cm and weighs between 2kg and 4kg.

You will love the big adorable eyes set on a round fluffy face.

For coat color, a Napoleon cat adorns himself with rich chocolate, sepia, or mink hues.

One other interesting thing to note is that Napoleon’s munchkin cats are seldom purebred.

Instead, cat breeders love to cross the Munchkin cat with other breeds like the Bengal cat, Sphynx, LaPerm, or the Himalayan cat.

The idea is to maintain the short-legged Dachshund profile the Minuet cat is famous for.

A Minuet cat is nothing short of amazing.

He is gentle, friendly, affectionate, and forms strong bonds with his owners.

What greater gift than the love of a cat

If you have always wanted a perfect lap cat that is very playful, we have a winner in the Napoleon munchkin.

He is very friendly to his owner and everyone in general.

Minuet cats also get along with other pets- cats, dogs, birds, and all.

A Napoleon cat is very laid back yet playful.

Show him a ball of yarn and he will go crazy chasing after it.

But if you are busy, he does not mind spending the day on his rug or your lap.

Though the Minuet cat is very playful, he is still a moderate-energy cat.

He will not cause a fuss if he misses a day of exercise or play.

An hour or two of playing with him is enough to release pent-up energy.

Afterward, leave him with lots of toys, and his favorite cat bed, and he will be good.

A Minuet cat that grows up in a loving and caring home will live for 12 to 15 years.

As long as you keep his diet healthy and exercise him regularly, you should not worry about him getting sick often.

But as a pet parent, you should also be aware of the genetic diseases that are likely to befall a Napoleon munchkin cat.

A Minuet cat that leans strongly towards his Munchkin parent is vulnerable to Pectus excavatum and lordosis.

Lordosis is a rare spinal condition in which the spine does not fully form.

A Minuet cat with a poorly formed spine will have a back that curves inwards.

All About Flame Point Ragdoll Cats

Pectus excavatum, on the other hand, is a deformity of the chest bone.

If poorly formed, the Minuet cat will have a chest that curves inwards.

This condition may be noticeable in kittens or may develop later in an adult Minuet cat.

If a Napoleon cat takes after his Persian parent, he is more prone to Polycystic kidney disease.

This is a condition where fluid-filled cysts form around the kidney.

So, it is important to take your Minuet cat for regular checkups.

A Minuet cat will thrive in a city apartment or a country family home.

He is compact and does not take up much space.

Being docile, he will fit perfectly into your busy lifestyle.

But always make time to bond with him because he loves that.

A Napoleon munchkin is one feline every cat lover would love to own.

He has a rare physique and a big heart for both people and pets.

Care for him well and a Minuet cat will give you 15 years of poor fun and fond memories.

Why is a Minuet cat nicknamed a Teacup cat?

A Napoleon Munchkin cat is nicknamed ‘Teacup’ if he adopts the short stature of a munchkin. In the canine world, the teacup puppy is famous for his ability to fit in your palm.

How much is a Persian Munchkin Cat mix?

A Napoleon Munchkin cat can be expensive when bought from a reputable breeder. Expect to pay as much as $2300 on a Minuet cat. Adopting from shelters is cheaper and you are likely to pay as low as $75.

Can I allow my Minuet cat to go outside?

A Persian Munchkin mix thrives better as an indoor cat. His tiny legs make him slow which is not good if a predator is lurking. He may also find it hard reaching high grounds because of his short stature. If a Minuet cat wants to go out, it should be in a supervised environment.

He may not jump as high as a cat with long legs, but a Minuet cat’s playfulness also makes him jumpy. But a Napoleon munchkin cat with the long legs of a Persian cat will jump high enough. Contrary to popular belief, the short legs on a Minuet do not necessarily mean he will develop a bad spine in the future.