The Siamese Cat is a very intelligent and playful cat. They are also one of the most popular breeds in the world. There is a lot to know about these beautiful animals, but what you may not have known was that there are different colors for them.

One of the most common colors for Siamese Cats is Seal Point. They have a dark brown body with light brown points. Another popular color is Blue Point Siamese which has a light blue body with darker blue points.

Chocolate Point Siamese are also very popular and they have a light brown body while the Lilac Point Siamese is a beautiful light purple color with darker points and they are also becoming more and more popular.

In this article, we shall reveal the amazing and different colors of the beautiful Siamese cat in detail. Some will surprise you but most of all we hope they will create an admiration for these Siamese cats. Keep reading to learn all the siamese cat colors!

The Origin of Siamese Cat Colors

The Siamese cat is among the oldest cats to be ever domesticated and it was originally from Thailand. The name Siam was a former name for Thailand. This cat was very famous among the royal families.

They are a natural breed with crystal eyes that are blue, their ears are pointed, and they are slick, beautiful, and tall. The fur on these beautiful felines is short and fine.

These felines love attention and can be quite vocal by making meow noises that sound as if they are talking to you. They are also the most intelligent cats you will ever come across.

Yes! The Siamese cats would be your best choice for the family because they are social and affectionate with children like savannah cat. They are also not aggressive with other cats or pets in the home.

Some of the breeds that are derived from the Siamese cats include:

How to Know the Type of Siamese Cat?

The dark facial features on the Siamese cats are on their faces, noses, tails, ears, paw pads, and paws. They also have a coat with a cream color. The dark parts are what is referred to as their points. The color points are used to know the name of the Siamese cat in question.

It is important to note that the coat color of your Siamese cat will depend on whether you live in a place with a high temperature or a place of low temperatures. These cats have an enzyme called tyrosine which is very sensitive to temperature.

For example, in locations with high temperatures, the enzyme activities are decreased, and at room temperature, your Siamese cat will have fur that is white or almost cream. In areas with low temperatures, melanin is produced, and the resulting Siamese will have a dark coat.

The Siamese cats are born with white color because of the uniformity of temperature in the parent’s womb. The points start showing up a few weeks as they start growing, due to the temperature change.

How Many Siamese Cat Colors Are There?

Keep reading to find out the up-to-date siamese cat colors as of 2022. 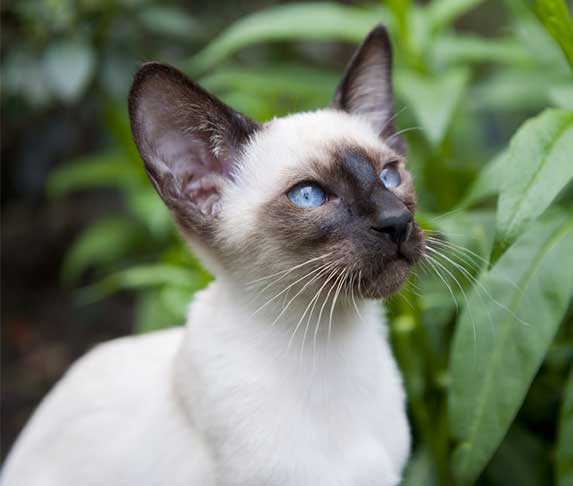 Seal point siamese is considered the first cat to be exported from Siam (Thailand). These are very common and familiar colors of the Siamese point, and they are known worldwide for their richness in color.

They are known for the dark siamese colors with a finish of chocolate points on their ears, noses, tails, paw pads, and paws.

Their body color looks creamy. These are one of a kind because they are the only Siamese cat species with the darkest fur color of the Siamese color points. 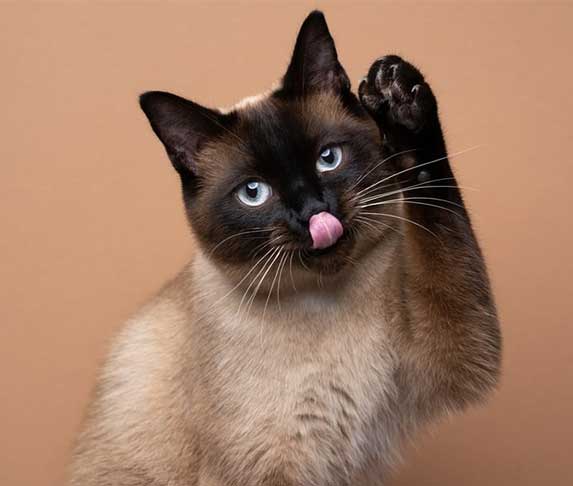 These cats with chocolate points tend to have ivory, cream-colored bodies along with markings that are chocolate in color. They are famously known as Choccie points because of the chocolate color.

The fact that they do not have shading on their bodies, creates a beautiful contrast that exists with these cats. It makes them look very different from other cats. You will also know them for their sharp eyes with a piercing look.

The coat colors of these cats are a lighter, dilution of the darker seal point. They have paw pads that have a beautiful pink and cinnamon color. You will also find this color on their noses.

These cats are rare and beautiful. You will easily know the difference between the seal points and the chocolate points because, during the adult age, their chocolate color points are always slow in development when you compare them with other colorizations. 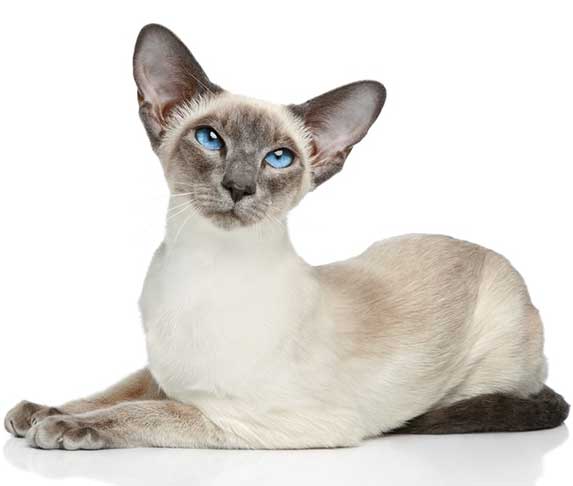 Bluepoint Siamese stands out because of their one-of-a-kind silver color. They have a color composition that is silver, slate, gray, and blue color shade that is prominent on their faces, ears, tail, and all extremities.

Sometimes you will find a shade of blue on the back of these beautiful cats and under their bellies.
This kind of Siamese has fur that is white but dotted with a bluish finish to enhance the beauty on their bodies.

Their noses have a lovely contrast to their dark grey color. The same applies to their paw pads and color points. 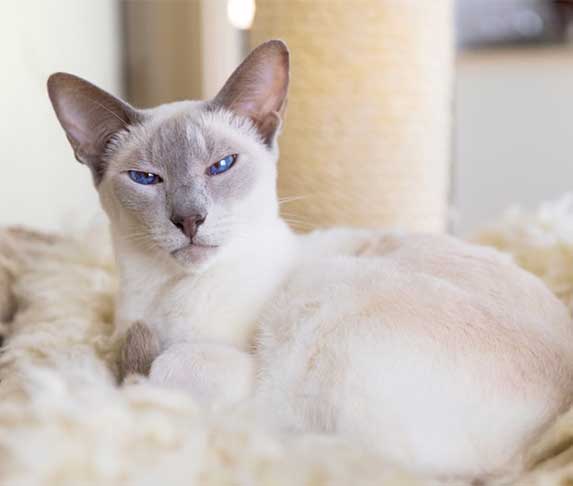 It became known in the early 1960’s and is among the most famous of the Siamese cat breeds. It can be said that the lilac frost is like a diluted version of the chocolate points. Experts call it a delicate color point. The color is a composition of a pink hint with a warm grey pigment on the fur.

The fact that they have a frosty pinkish-gray tone, makes this color get the name, “frost point.” They are the lightest points of the Siamese colors because of the touch of a glacial pink and white undertone.

They happen to have paw pads and noses that are soft with a pinkish pigment, giving them extra good looks. They are very attractive. The lilac point is always referred to as a watered-down version of the chocolate or blue points. 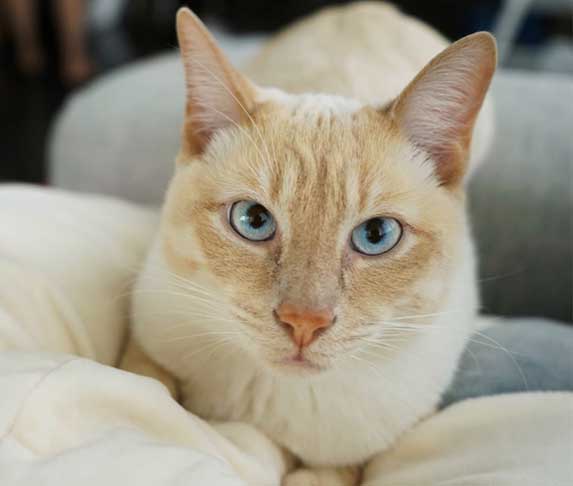 These color points Siamese come as a result of crossbreeding Tortoiseshell with a red tabby. Their bodies are warm white in appearance, while their faces, legs, paws, tail, and ears have a mixture of a beautiful reddish-gold color that is bright.

These cats will also have nose and paw pads that are red-pink, though this is not very common. 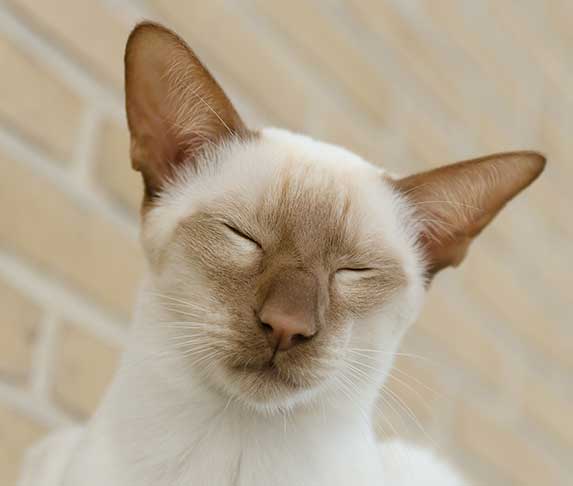 These felines’ fur is a dilute of the chocolate point Siamese. They have an ivory body with a beautiful coloring of cinnamon in all their cinnamon point species. Their noses and paw pads are pink with a touch of a brown color.

When you look at the feet of these felines, it looks pale than the rest of the body. The area around their eyes is a light brown, and their paw pads and nose leather have a pinkish-brown color. 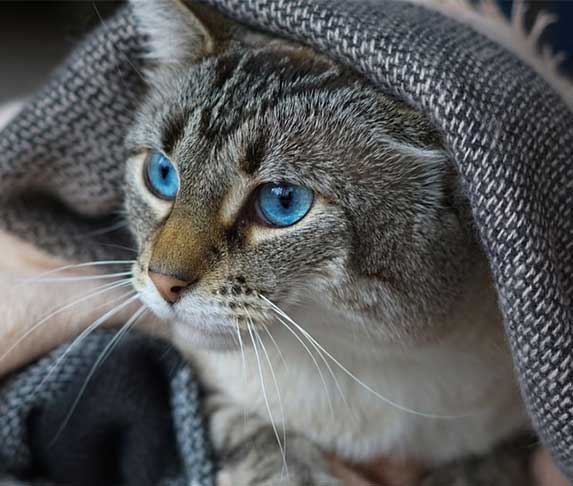 They are also known as tabby points. They were created as a result of crossbreeding a seal point and the domestic tabby.

Lynx point comes in different shades and among these siamese cat color shades are:

You will identify the tabby point Siamese colors by the stripe markings on their faces. These stripes are more dominant around the eyes, the forehead, and the nose. You will see an “M” marking on the forehead of these cats, and when you look at their ears, you will see a thumb-prink-like pattern.

These kitties are fairly easy to identify by their beautiful adorable striped points on their extremities. 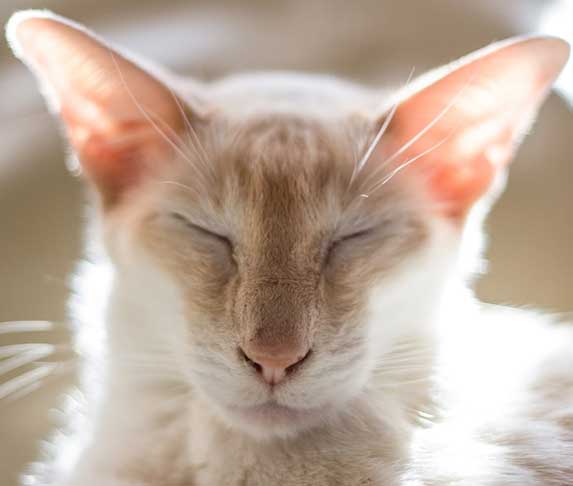 Cream point Siamese is a crossbreed of the redpoint Siamese, domestic shorthair, and Abyssinian felines. They have bodies that appear to have a soft white color, and a look at their paw pads and the nose show that they have a pink shade that appears pale.

The color of these felines is generally a light color scheme that makes them refer to as cream points. 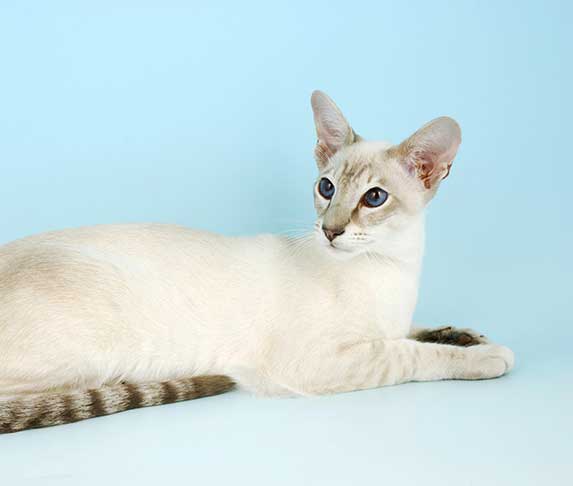 Caramel points Siamese are felines with having a gray shade with a bit of brown shade in their noses and paws. These felines also have features like warm gray-brown tones across their points.

The shades on these felines are more visible on the muzzle, ears, tail, legs, and nose. They have a soft gray, with some having pinkish dilute color on their paw pads, nose leather, and around their lips 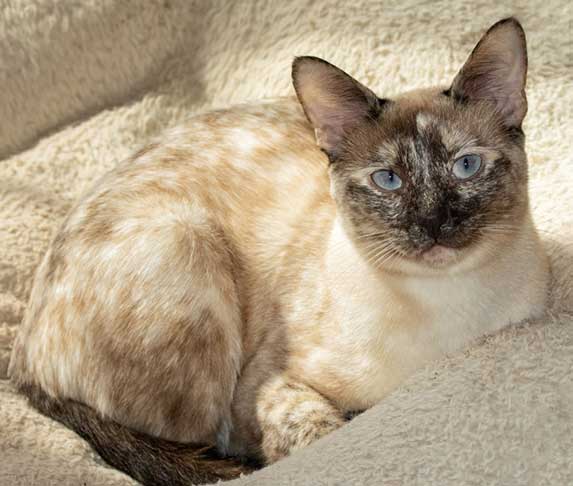 These felines come in all colors, especially red color and cream. They are crossbreeds of Siamese cats with adorable tortoiseshell parent breed colors.
Tortie points have a mixture of red, cream, and apricot, and their bodies are commonly red and black based.

The points dominant color in these felines is the darker color, while their bodies always have dotted and lighter shades. They love cuddling, they make good family pets, and they are sociable with other pets, even the dogs.

These tortoiseshell points Siamese come in a variety of sub colors.

The most common colors of Tortie point Siamese cats are:

They have a dark and deep orange-like color with cinnamon-brown color points and a mixture of light red shades. The bigger part of their bodies is mainly covered by a combination of ivory color and cream color.

These siamese cat colors include a shade of warm white body color with the beautification of mushroom-like points.

History has it that these Siamese points were breaded in the nineteen forties in Scotland by an expert breeder. They have what is referred to as shadow points, or you may call them the lynx points. They have beautiful strips that are unique and no other Siamese points have. These stripes are what are known as tabby stripes. This is another breed that has the ‘M’ Stripes of tabby on their forehead, which are darker and more visible.

Some of the breed associations have not agreed to refer to Tabby Point as an official color because for you as a breeder to achieve these markings. You will also have to cross the Siamese with Tabby-colored breeds in one way or the other. Tabby points are in various colors, all of which are variations of the above-listed colors, but despite the variations, they all have tabby stripes.

The tabby point Siamese are the most loveable cats around the world, and they come in varied colors and patterns. A look at their face, specifically around the nose, eyes lids, and forehead, you will find clearly defined striped markings. They have ears with a thumbprint pattern, and their tails have beautiful rings.

As you can see, there are many different colors of Siamese Cats and each one is just as beautiful as the next. The Siamese cats make good family pets because they are affectionate, not aggressive, and they love kids and other pets including dogs.

No matter what your preferences are, the shades of these Siamese cats are numerous, and you have many choices to choose from. Most of them have beautiful names such as the Chocolate Point Siamese, the Blue Point Siamese, and the Tortie Point Siamese.

These amazing colors are not just hereditary, but also affected by the temperatures of the environment they live in. If you are interested in owning one of these amazing animals, be sure to do your research and visit a breeder.

Choose this beautiful cat to be your family pet, think about the awesome Siamese color points in cats, and get a living masterpiece!