During the summer, when the sun is at its highest peak, it is best to cool ourselves with cold and delicious desserts.

The previous years have been the tapioca era where bubble teas, milk teas, and most importantly, tapioca pudding have been widespread.

But as humans experience the heatwave and crave a cold dessert to refresh themselves with, dogs do too.

Tapioca pudding will be a nice refreshing snack but will it be fine if you also feed your dogs the same food to help them during these sweaty times?

Read on to find out. 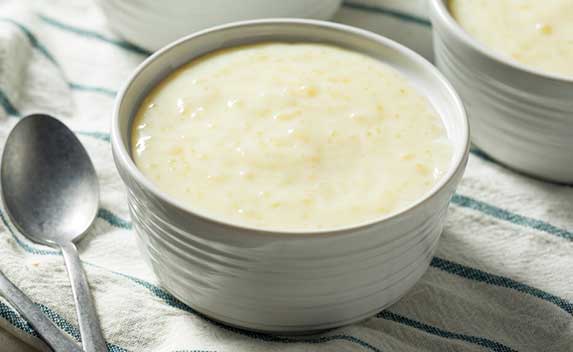 We must understand that tapioca puddings, as the name suggests, are predominantly composed of 3 primary ingredients: Milk, tapioca, and sugar.

Although there are other ingredients like eggs, salt, and vanilla extract, these are just in trace quantities.

The following will give reasons for answering the question of whether dogs can eat tapioca pudding.

Tapioca is healthy for the dogs

Tapioca is from cassava (Manihot esculenta).

In creating tapioca puddings, the pearls are the ones usually utilized.

Although composed mainly of starch (which is a stored form of sugars in plants), it is healthier than other sugar sources.

Aside from this, it is gluten-free and is high in minerals like calcium, manganese, and iron.

There are dog foods that utilize tapioca as an ingredient.

Undoubtedly, tapioca is a healthy choice for a dog diet.

Milk is a red-flag

The milk ingredient weighs down the significant health contributions of tapioca.

Dogs develop lactose intolerance after the weaning period due to the lack of milk in their diets.

It means that the lactase enzyme in their bodies is no longer sufficient.

Thus, no enzyme will digest the lactose from the milk.

Undigested milk can result in several problems to dogs, including the following:

Milk is not bad. It is an excellent source of calcium.

However, the problem lies with the incapacity of dogs to digest the milk.

If dogs are well-adapted to dairy products, if they have continued consuming such even after their pup stages, then it is well and good.

Carbohydrates from tapioca are good sources of sugar.

But adding an extra layer of sugar in the equation will not be a healthy option for dogs.

Excess carbs, in extreme scenarios, can only increase the possibility of dogs having high sugar levels in their bloodstream.

It may potentially escalate to the following:

Tapioca pudding would have been a great snack for our furry friends too.

However, the ingredients needed to create it would compromise the health of our pooch.

So, can dogs then eat tapioca pudding?

Just let them fulfill their curiosity but nothing more.

You can feed them a little, say 1 tbsp, and that is it.