Some dog breeds have an eerie similarity to wolves, to the point where some could even be confused for smaller versions of the other canine.

Even some wolves show similar behavior to the dogs they were far more used to.

Yet there are enough differences between the two species that the distinction continues to be relevant.

Still, there is a general ignorance of these differences, meaning that most people might not understand what truly separates these two animals.

This might lead some curious dog owners to question whether or not their pet would ever have the chance of being accepted into a wild wolf pack.

Or if their distant cousins are just too dissimilar.

As pleasant a scene that may be, no, having your domesticated dog around a wolf pack would be extremely dangerous, and chances of it being able to join the pack would be near impossible.

Understanding how dogs differ from wolves and how wolves behave compared to the dogs we know can potentially help you come to understand your own pet better, and keep it safer should the need arise.

What Makes Dogs and Wolves Different? 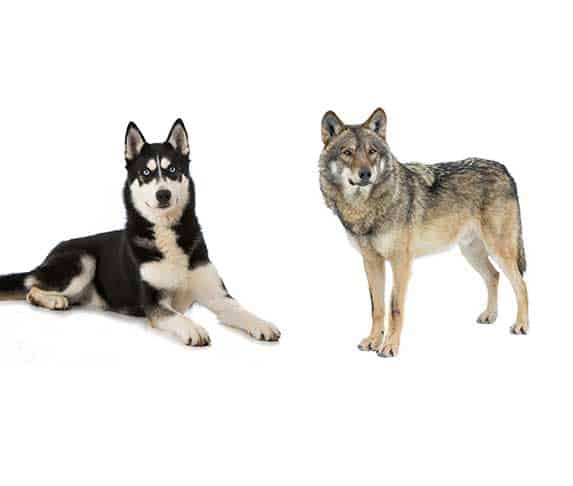 Modern dogs and wolves both generally share an ancient ancestor in Canis Lupis.

Although, after that point, the species began to split.

Dogs come from ancient wolves who found friendliness to be a trait that gave them better chances at survival.

As it allowed for them to better communicate with humans.

Wolves stuck with their natural instincts, continuing to survive and thrive in the hunter lifestyle.

The two continue to share many of the same traits, each of which is suited best for that particular species.

Physically, wolves are the superior species.

Not only are their jaws much stronger than dogs, but they’re able to:

Dogs, on the other hand, while still physically sufficient, evolved to value their skills in communication more.

Our canines are far more skilled at learning and receiving kinds.

As well as being able to understand our emotions through subtle details.

That allows us to form stronger and better relationships that help us both.

How Do Wolf Packs Work?

Understanding the way a wolf pack functions and structures itself is essential in understanding how wolves react to other animals, even their distant cousins.

1. At the head of the pack is the breeding pair, also referred to as the alphas, in other words, they are the male and female leaders of the pack.

In most areas, these are the only wolves that are allowed to breed and are usually the first ones to eat.

2. When pups are born, the pack as a whole works to take care of them, in a den until the pups are old enough to leave.

The younger wolves will stay behind at dens while the adults go out in search of food, returning with it and dispersing it among the different ranks.

3. Also in the pack is the omega, the lowest-ranking wolf who both eats last and acts as a submissive for play.

Allowing other wolves to take out their stress on it.

4. Once old enough, most young wolves leave the pack in search of a mate to start whole new packs of their own.

Wolves, like dogs, are quite social animals, so it’s not all that uncommon for whole packs to join together for hunts should the need arise.

Can Dogs Run On Cement And Concrete?

Would A Dog Be Able To Join A Pack?

It should be noted that while wolves are considered a social species, that neighborly attitude extends only as far as their own species in dire circumstances.

Unlike our more familiar dogs who evolved a friendly nature to others, these wolves have made no such adjustments to themselves.

Unfortunately, if a dog of any breed were to attempt to socialize with a wolf, it most likely would be seen as food more than anything else.

Despite how similar we perceive them, either species wouldn’t see it that way, and to a hungry wolf, a dog might look like easy prey.

Considering the fact that most dogs are many times smaller than wolves, this doesn’t help their chances of survival much.

Aside from that, a dog would have a hard time living in any sort of wolf pack.

Being the smallest out of all of them, there’s little doubt that a dog would end up in any role other than the omega.

Wolves’ diets might also be too harsh for most canines.

Not including the fact that wolves have evolved to go much longer between meals than most dogs can.

As fun as sight as it would be, a dog’s dream of ever being in a pack is nothing more than that, dreams.

Are Wolves Dangerous Around Dogs? 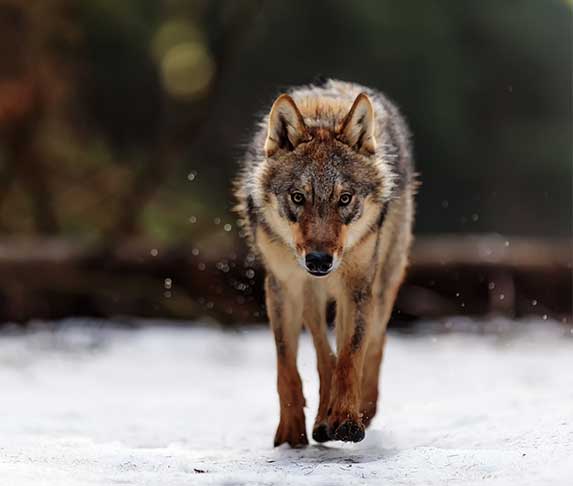 There are several recorded instances of wolves behaving around humans similarly to how a dog would.

But this goes for plenty of other animals as well, you still don’t see people with bears in their living room.

Any animal can be taught to be friendly, it doesn’t mean you can take the wild out of them, though.

That being the case, if you happen to see a wolf while you’re with your dog, don’t expect the two to become best friends.

There’s been little evidence of dogs and wolves being able to actually communicate on the level we do with them.

If you happen to be in this scenario, the best thing you can do is to remain calm and make sure your dog does the same.

Most likely, the wolf will want little to do with you, but it could be provoked to attack if it senses aggression from your dog.

Running away is another quick way to get both of you hurt.

So standing still, making yourself appear tall, and keeping your dog will usually mean an end to the encounter.

Breaking up a fight between a dog and a wolf shouldn’t be done unless you have the proper equipment to do so.

Most people might just see wolves as bigger versions of dogs, and never really come to understand the many differences between the two species.

Wolf packs also work in a way that not many people would expect.

Which only furthers the misleading ideas and thoughts people hold about the species.

The chances of a dog mingling with a wolf are quite low.

But there’s no need to worry, as any good owner can see, your dog has already found a loving and protective pack with you.