There is a common misconception that goes around that our canines can only see either white or black.

However, this might not be true because dogs’ color vision has more complexities than what we may understand.

In 1937, in Will Rudy’s training manual, a dog only sees the world in shades of black and grey.

Additionally, in 1960, scientists believed that it was only primates that had a strong color vision while all other animals did not.

Dogs are unable to use glasses like humans because they have different eye composition that makes it difficult for the glasses however complex to be effective.

Researchers believe that dogs are dichromats.

This means that they only have two types of cone cells that are color sensitive; yellow and blue.

Compared to human beings who have three types of cones (trichromats), the color vision of dogs can be said to be very limited.

Scientists have pointed out that the vision of dogs can be compared to the vision of someone who suffers from color blindness (red-green). 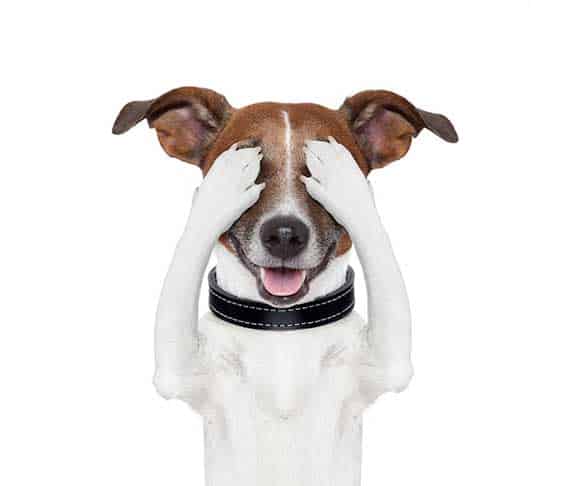 In recent decades, examinations carried on the eyesight of canines have revealed that there are significant differences in terms of their eye structure in comparison to human beings.

Dr. Jerry Klein who is the chief veterinary officer at AKC explained that canine eyes have a larger corneal surface, lens, and also reflective membrane (tapetum) that enhances their vision at night.

This can be attributed to the fact that dogs who initially were nocturnal hunters, developed their senses as they tracked and caught food at night.

That is the reason why their eyes are adapted to catch movement and also see well in the dark.

What Colors Can Your Dog See Then?

Dogs can make out the colors blue and yellow, as well as combinations of these colors.

This means that to dogs, a lot of the world is grayish-brown.

The green lawn you constantly obsess over and try to keep your dog from peeing on?

Your dog probably perceives it as a field full of dead hay.

The velvet cushion that you got for your dog for Christmas and is bright red?

As much as it is very comfortable for your pup, it probably comes across to him as a dark brown shade.

This knowledge can now help you understand why it is that some dogs get excited and almost uncontrollable over tennis balls that are yellow.

But do not show the same excitement over the same balls in red or pink.

Why Do Dogs Fake Sneeze? (9 Reasons)

Do The Famous Enchroma Color Blind Glasses Work For Dogs?

As sad as it may be, it is true that our furry friends do not see the world as we do.

They are not able to pinpoint the beautiful shades of green and red as we can.

Is there a remedy for that? When you look into color blindness, the very first recommended remedy is EnChroma glasses, or as some may put it color blind glasses.

EnChroma glasses are lenses that have been designed to specifically and uniquely alleviate the symptoms of red-green color blindness.

Researches have shown that glasses have had an impeccable positive impact on people who suffer from red-green color blindness.

The unfortunate answer is no.

It is highly recommended that dogs should not wear colorblind glasses.

As much as some human beings may be red-green colorblind, they still have all the three-cone cells;

whereas dogs only have two;

This makes the difference in terms of their eye composition too great for the glasses to be effective when used on dogs.

An ophthalmologist from Seattle pointed out that because the EnChroma glasses work by shifting the spectrum.

Dogs would therefore have their entire color recognition tampered with if they wore such glasses and that would leave them in distress.

What Does It Mean For You And Your Dog? 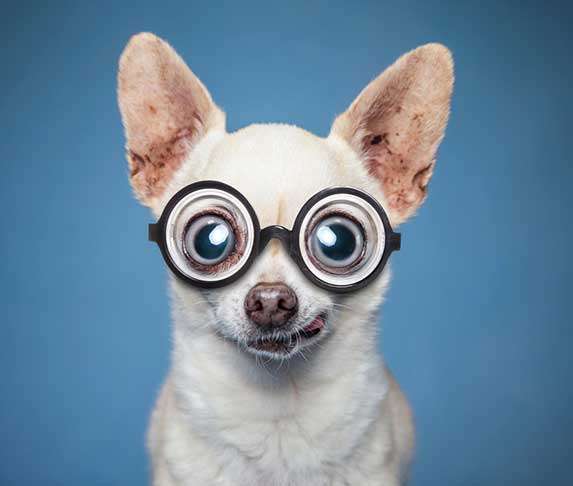 It is exciting for dog owners to pick out dog toys, beds, collars, and all you think of concerning a dog in very bright colors.

But unfortunately, the colors of all those do not make much of a difference to your dog.

Toys in various rainbow hues and intense shades of colors will not impact the toy difference of your dog but it seems to impact the preference of almost if not all dog owners.

Marketers, as well as graphic designers, have been using this knowledge that humans would rather get their pups toys in bright hues.

Since time immemorial to make sales even though they are aware dogs have no concrete perception of colors.

As a dog owner now possessing the above knowledge, however, it only makes sense that you choose products for your furry friends in colors that they can see.

When you are throwing a ball for your dog to fetch on your lawn or even by the lake, remember not to pick a red one for he is likely to lose it.

If you are teaching your dog to differentiate toys or even obedience training dumbells, remember to keep your options as blue and yellow.

Smart dog trainers as well as dog sport enthusiasts have been known to be aware and even pick up on the various color schemes that are perceived by dogs.

A classic instance is that you may have picked up that the dog agility equipment is often blue and yellow.

If you ever find your dog barking into darkness but you cannot quite see anything, be sure not to dismiss them as much as it may be creepy.

Although canines may not be able to notice the bright red color of something you consider dangerous, their impeccable eyesight in the dark can be counted on.

They have more light-sensitive rods despite having fewer cones that detect light compared to the human eye.

Because of this, they can see creatures in the dark of the night move.

We can all agree without a doubt that this skill is much handier for them as well as you that being able to distinguish the bright red color of the new ball you just bought them.

as much as dogs are red-green colorblind and it is not advisable for them to wear color blind glasses, there is still so much more they can do.

And as the owners that you can do to keep your pup happy as seen above.